The Energy Fix: How To Clean Up Fracking’s Bad Rep

If fossil fuels are to remain a large part of the nation’s energy mix, engineers need to reduce their environmental impacts. 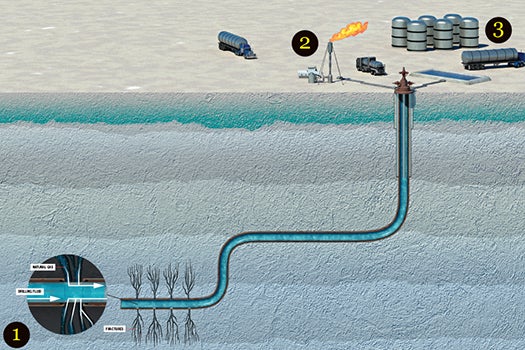 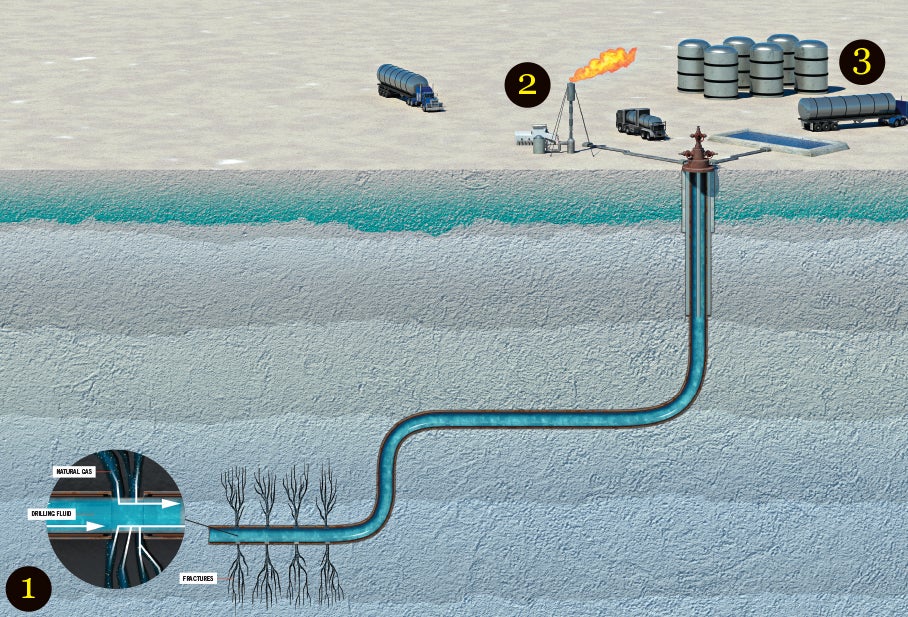 1. Drillers inject a fluid (almost always water) carrying sand and other additives into a well at high pressures. This fractures the rock and frees natural gas to flow back to the surfacea€”along with some of the drilling fluid and natural contaminants. 2. Flaring natural gas converts methane to carbon dioxide, which is a less potent greenhouse gas. But methane can also leak or be vented directly into the atmosphere. 3. Tanker trucks typically deliver between two and five million gallons of water to fracture one well.

Hydraulic fracturing and horizontal drilling have opened up huge reservoirs of oil and gas across the U.S. The Energy Information Administration predicts that production of shale gas in particular will continue to rise steeply, increasing 44 percent between 2011 and 2040. If fossil fuels are to remain a large part of the nation’s energy mix, engineers need to reduce their environmental impacts.

Oil and gas companies send millions of gallons of pressurized water­—along with chemicals and sand­—down wells to fracture shale. But the liquid, called flowback, returns to the surface filled with contaminants, making it unusable for other purposes—even fracturing new wells. Water-treatment technology is still in its “45rpm phonograph” stage says David Burnett, a Texas A&M petroleum engineer who oversees pilot studies of prototype systems for the Department of Energy. Of various methods now in development, membrane-filtration technology is especially energy efficient and site adaptable: Engineers can fine-tune a series of membranes to remove different substances from water as it passes through. Such on-site systems could reduce the need for freshwater, critical in arid regions of the U.S.

Ideally, drillers would eliminate the use of water in hydraulic fracturing, or fracking, altogether. A Canadian well-fracturing company called GasFrac has developed a substitute: a gel made from liquefied petroleum gas (LPG) and propane. Because it’s a hydrocarbon, the gel dissolves into the target oil or gas and returns to the surface with the rest of the payload. But because the gel does not dissolve salts or clay in the shale, it doesn’t sweep natural contaminants back out of the well. Chevron reported that LPG used in a pilot test conducted in Colorado in 2011 significantly increased natural-gas production while minimizing water usage

In 2011, oil and gas operations flared or vented almost 210 billion cubic feet of natural gas that they couldn’t use or store—enough to heat more than two million homes for a year. In North Dakota’s Bakken shale formation, drillers flared or vented 32 percent of the gas produced during oil extraction (the national average is less than 1 percent) because they lacked sufficient pipelines and processing facilities. A consortium that includes the National Renewable Energy Laboratory launched a project in January to convert the surplus gas into diesel or jet fuel. Scientists will genetically engineer microbes that naturally feed on methane to boost the amount of lipids they produce. They will then convert those lipids into a feedstock that could be piped to a refinery or used on-site.