A Solar Dish That Makes Electricity And Fresh Water 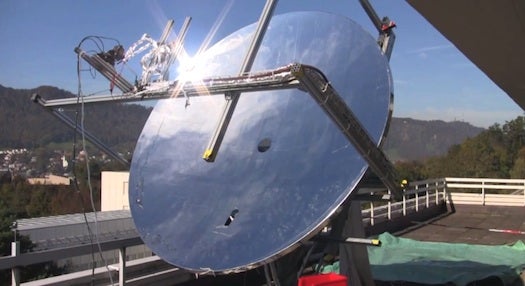 It’s not exactly a solar panel. It’s more like a solar dish. And not only does it generate electricity, it makes water, too.

Researchers at companies and universities in Switzerland are developing a parabolic solar energy-capturing dish that they hope will be cheaper than current panels and be able to use some of the heat it captures, too: The heat goes into a desalination system that turns salt water into potable water.

Officially, the whole dish-desalinator complex is called the High Concentration PhotoVoltaic Thermal system. The Swiss Commission for Technology and Innovation gave the developing team $2.4 million to make it. Researchers at IBM Zurich are currently testing a prototype, according to IBM. Researchers also plan to build prototypes in two other cities in Switzerland.

The inside surface of each solar dish is covered with small mirrors that reflect light onto receivers containing hundreds of small solar energy-converting chips. Each receiver gets solar energy that’s much more concentrated than direct sunlight and generates 25 kilowatts of power.

The dish’s makers hope the system will make electricity at a low enough cost to compete with coal power because most of it—the whole reflecting parabola—doesn’t require expensive materials.

Meanwhile, each dish’s receivers get not only concentrated sunlight, but enough heat to melt them in seconds. To keep things cool, dishes have a liquid coolant system that IBM originally designed for high-performance computers. The liquid coolant absorbs heat from the receivers, and then goes to evaporate salt water in the desalination portion of the system.

One square meter’s (about 11 square feet) worth of receivers could make 30 to 40 liters (about 8 to 10 gallons) of fresh water a day that’s sunny for eight hours, according to IBM.