How Did We Know North Korea Tested A Nuke?

When North Korea tests a new nuclear weapon, seismographs are the first to know. 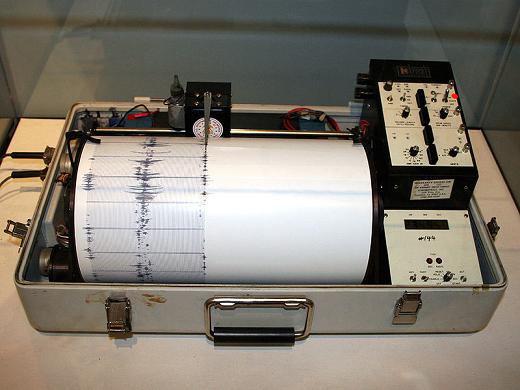 Let’s look at a little bit of history. In the beginning of the atomic age, nuclear weapons were tested wherever scientists could put a nuke. The first nuclear test ever conducted was above ground, in a sprawling expanse of New Mexico desert. In 1946, President Truman authorized the first underwater nuclear test as part of Operation Crossroads. At the start of the 1950s, nuclear weapons were tested underground in Nevada. A year after Russia launched Sputnik and with the space race well underway, the United States attempted a test high-atmospheric nuclear explosions close to the edge of space. Almost all of these environments would soon be off limits to nuclear testing.

Spurred by concerns that nuclear fallout might spread across national borders, the Test Ban Treaty was signed and entered into force in 1963. The treaty banned tests in the air, in space, and under water. Testing underground, however, was still allowed.

Nuclear tests can be detected a few ways. With radionuclide testing, radioactive particles released into the air from a nuclear explosion can be identified, but if the underground nuclear test is contained deep enough underground, this test won’t work. Infrasound monitoring looks for tiny air pressure changes that can indicate a nuclear test, but these too can be masked by testing deep underground. Hydroacoustic monitoring looks for sound waves caused by nuclear explosions that move through the water, but the value of this technique is limited if the test isn’t conducted under water or near a coast. Of all the ways to detect a nuclear test, seismographs work the best for underground tests.

And since 1963, most nuclear testing has been conducted underground, with no government that signed the treaty breaking the treaty. (France and China, both nuclear-armed nations, have not signed on to the limited test ban). When India and then Pakistan tested nuclear weapons in May 1998, they did so underground. Preparing a nuclear test this way generates the kind of activity that an intelligence agency should be able to pick up with months of above-ground site preparation visible in satellite imagery, but at the time the CIA managed to miss it. However, seismologists were able to find out about the tests almost instantly, and were able to determine both the location and the likely range of nuclear explosive power from the tests of Pakistan and India.

Seismographs measure energy waves moving in the ground, and are most commonly used for detecting earthquakes. Because nuclear weapons tested underground also release a tremendous amount of energy, they can usually be picked up by seismographs, and for this reason they are one of the core parts of the Comprehensive Test Ban Treaty Organization’s (CTBTO) verification regime.

All of this brings us back to North Korea. The only nation to have tested nuclear weapons this millennium, North Korea first declared an intention to test a nuclear device in October 2006. A few days after the announcement, and shortly after the test, the USGS detected a 4.3 magnitude earthquake 45 miles north of Kimchaek, North Korea. Within two hours, the CTBTO was able to narrow the location of the nuclear test. This was all possible even with an explosion that proved to be very small. Some intelligence reports estimated the size of the nuclear explosion at below a kiloton, making it potentially 1/15th the size of Little Boy, the bomb dropped on Hiroshima.

When North Korea tested a second nuclear device underground in 2009, seismic data was able to determine that it was a much larger explosion. But more precision than that can be challenging: being able to distinguish between sub-kiloton and 4-kiloton explosions is one thing, but precisely nailing it down will require further evidence from the other techniques mentioned above. As we wait for comprehensive reports to come in about this morning’s nuclear test, you can thank the seismograph for providing enough information to verify the location and general strength of the test, which is stronger than the one that came before. But “it could take months or years for experts to analyze more data and come up with a more exact number on the bomb’s yield.” Sadly, that’s not enough to prevent hyperbolic speculation about what the largest bomb North Korea could possibly have would do if it went off in New York City.