Survive the end of the world in this bomb shelter for just $5,000 down 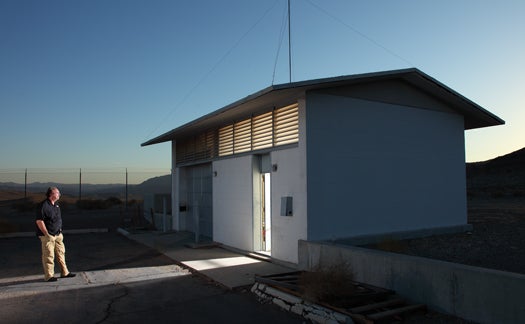 To reach the world’s first everything-proof underground luxury community, I drive east out of Barstow, California, 50 or so miles into the Mojave Desert, then turn down an unmarked gravel road, park in a barren lot surrounded by razor wire, enter what appears to be a small cinderblock garage, and walk down two steep flights of reinforced-concrete stairs, at which point the project’s enthusiastic promoter, Robert Vicino, greets me with an outstretched hand, slams a 3,000-pound blast door behind us, and asks this question: “Do you have a family?”

Then: Do I have life insurance? Would I like to have 10 times the life insurance I already have? Would I like to have something even better? Because I can. The structure in which we are now standing was built by AT&T in 1965 to protect telephone infrastructure from a nuclear attack, but now it can protect something far more important: me and my loved ones. For just $50,000 each—half off for kids—I can buy a fractional share of the Terra Vivos underground shelter network, a project that will include at least 19 more “community bunkers,” each of them located within 150 to 200 miles of a major American city. Terra Vivos is a concrete-and-steel solution to the end times, whether brought about by climate change or nuclear war or even an unavoidable realignment of the cosmic order. Wherever I happen to be at that terrible moment, I’ll have a place to live the morning after. “I’m not selling life insurance,” Vicino explains. “I’m providing life assurance.”

The physical specifications required to assure life are striking. The Barstow bunker was built to withstand a 50-megaton nuclear blast 10 miles away, 450mph winds, a magnitude-10 earthquake, 10 days of 1,250°F surface fires, and three weeks beneath any flood. Vicino says that a soon-to-be-installed air-filtration system will also neutralize any biological, chemical or nuclear attacks. The Barstow branch will stock enough food and clothing to sustain 135 people for at least a year, and in a lifestyle that Vicino describes as compact but luxurious, like being on a cruise ship. Getting on board requires a $5,000 deposit, he says, to be held in escrow until the bunker is ready to move into, at which point the remainder is due. As of August, several hundred people had put their money down for a spot in one of his bunkers, he says; 75 for Barstow thus far. 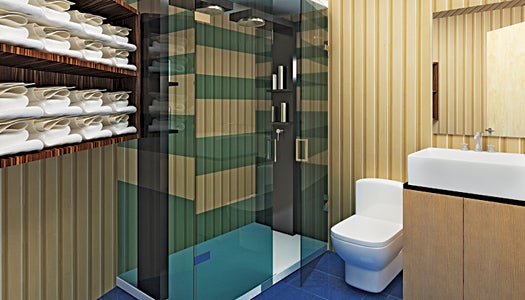 Vicino has always had a taste for offbeat business ventures. In 1977, at the age of 22, he pioneered the “giant inflatables” advertising medium by building a giant inflatable Jose Cuervo bottle for the liquor company to display at events. Within five years, he says, he had 200 Fortune 500 clients. After he had done everything he could do in the inflatables sector, he sold his company and began a new venture, speculating in fractional shares of resort homes from Europe to Hawaii. (A fractional share is like a timeshare, except that buyers actually own a piece of the title.)

The idea to build and sell post-apocalyptic bunkers weighed on Vicino for many years before he acted. In 1980 he saw a replica of the Mayan calendar, the ancient stone carving that predicts that the world will end on December 21, 2012. Vicino recalls the moment clearly. “It just gave me this gut-wrenching feeling that I needed to convert a mine to a shelter for 1,000 people with everything you’d need to survive for a long period of time.” The decades passed, however, and it wasn’t until this year, the end times fast approaching, that Vicino purchased the Barstow bunker for an undisclosed amount. He has six more under contract: one in North Carolina, one in Pennsylvania, two in New York, and two in “the Midwest.” (Vicino won’t give precise locations, citing the need to stay hidden from intruders.)

Now, as 2012 approaches, Vicino says he is actually more worried about 2013, when solar activity is expected to increase significantly. He says an extreme solar storm could fire a catastrophic electromagnetic pulse at Earth, crash the power grid, and thereby trigger anarchy. Even if the world escapes that fate, it could still face an asteroid, or a plague, or a war. Anything could happen. “2012 is just the impetus to bring the project forward because there’s a great deal of concern now, but these bunkers could be of use anytime in the next 200 years,” Vicino says. “We’re building for whenever.” 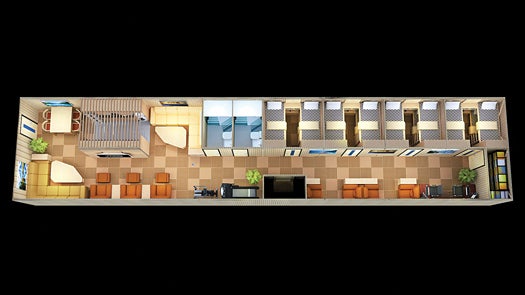 Each Vivos bunk, Vicino says, will allot 100 square feet of space to each resident. 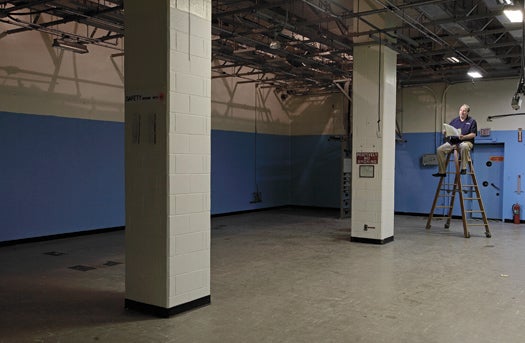 Vicino’s repair list for the Barstow bunker is extensive. Before he can start redecorating, it needs new wiring, a new generator, air filters and more. Projected cost: $3.5 million.

Vicino leads me into a smaller room, and the scent of old diesel recalls the bunker’s Cold War vintage. Vicino points to a flip switch marked “nuclear blast detector.” It activates a gamma-ray detector that will spot a nuclear blast as much as 100 miles away and instantly shut all the air vents. He had it tested before moving in. “This is the real thing,” he says. “It still works!”

Until recently, the construction of large bomb shelters was mainly the work of governments. In 1962, for instance, federal authorities completed construction of a massive “continuity of government” bunker beneath the Greenbrier resort in West Virginia. The nuclear-fallout shelter, code-named Project Greek Island, packed enough supplies to keep all of Congress plus another 600 staff members alive for 45 days.

Now smaller entrepreneurs are getting involved. Some are building from scratch—Texas-based Radius Engineering, for instance, offers fiberglass shelters that it says can support 2,000 people for five years underground—and others are taking over Cold War relics. “The critical infrastructure is there,” says Larry Hall, the project manager of Survival Condo Project, which is converting abandoned Atlas missile silos in Kansas into seven-floor fallout shelters at $1.75 million a floor. Brian Camden, the CEO of the Colorado firm Hardened Structures, says his bunker sales have increased by 40 percent since 2005. He is also helping Vicino renovate his older bunkers and build 13 more bunkers from prefabricated units that Vicino is ordering from a yacht manufacturer in Taiwan. 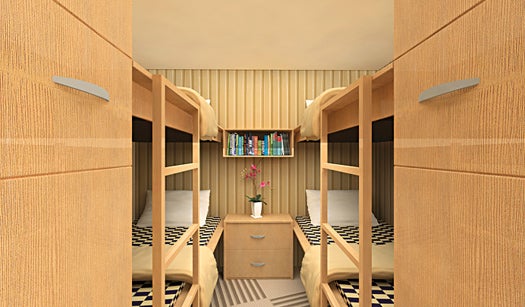 Buyers are drawn to Vivos for a variety of reasons. Jason Hodge, a 40-year-old former mechanic, says the promised air-filtration system was a major attraction: “I live 123 miles from Los Angeles, and I’m on the windward side of town. If a dirty bomb goes off in L.A., the fallout’s hitting my neighborhood within a couple of hours.” Steve Kramer, a 56-year-old respiratory therapist from Palos Verdes, California, is more concerned about post-apocalyptic raiders. He made his deposit, he says, after inspecting the bunker’s hardened-steel doors, which are strong enough to repel a tank blast.

Building the Vivos society requires complicated engineering too. Vicino says he has 5,000 additional applicants on file but that he is being selective in order to create a balanced community. “You wouldn’t want 200 doctors in one facility and no plumbers,” he says. “If the toilet breaks, that could be a real disaster.” People can bring guns, but they must check them at the door. If someone misbehaves, the security staff will lock him in a detention center. Vicino is also thinking about survival of the species, not just his customers. He plans to stock each Vivos bunker with a freezer full of DNA samples of as many species as he can collect. Whether it’s preserving humanity or reseeding a scorched planet, he asks, “don’t you want to be one of the guys repopulating the Earth?”

As our tour nears its conclusion, Vicino shows me an old control panel that indicates which bunker systems are still functioning. Only a few of the dozens of lights are blinking. The wiring is shot, the toilets don’t flush, and the 750-kilowatt diesel generator is so environmentally unsound that California law forbids him to run it. Vicino says he will need at least three more months to get the premises up to cruise-ship standards; the other 19 bunkers could be ready in 18 months.

The good news is that most scientists aren’t predicting any immediate trouble. Regarding the Mayan prediction of a planetary alignment that would catastrophically reverse the Earth’s magnetic field, Tom Bogdan, the director of the National Oceanic and Atmospheric Administration’s Space Weather Prediction Center, notes, “The planets have lined up plenty of times in the past, and we haven’t detected any associated catastrophe.” And in any case, no planetary alignment is expected in 2012. The only asteroid projected to come near Earth is a 1,000-foot-long rock called Apophis, and that won’t be until 2029. Steve Chesley, a scientist with NASA’s Near-Earth Object Program, says that even then, the odds of it hitting Earth run 250,000 to 1, adding, “There’s nothing that looks particularly threatening out there.” Climate change, meanwhile, will probably take several decades to create truly apocalyptic conditions, and in January the Bulletin of Atomic Scientists actually set its doomsday clock back by a full minute.

When I relate such findings to Vicino, he is unmoved. He says disaster is always imminent, that someone could explode a nuclear weapon at any moment, that two asteroids had only just recently come this close to slamming into the Earth. “Do you have a fire extinguisher in your home?” he asks finally. “Do you think it’s crazy to have it? Do you feel bad if you don’t get to use it to put out a fire? You just don’t know what’s heading our way.” 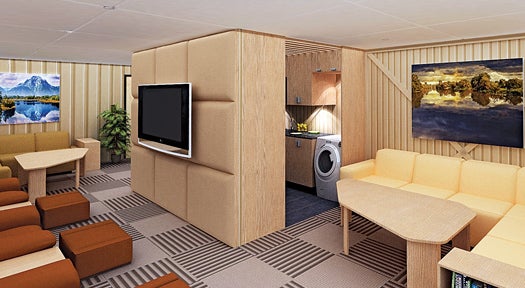 When disaster strikes, Vicino says, you won’t have time to pack, so Vivos bunkers will be stocked with casual attire, shoes and plenty of underwear. When it’s time to leave, you’ll get sturdy outdoor apparel to survive the wilderness.