This article originally appeared on io9. A pair of researchers from 2AI Labs have developed a wearable eyeglass device that... 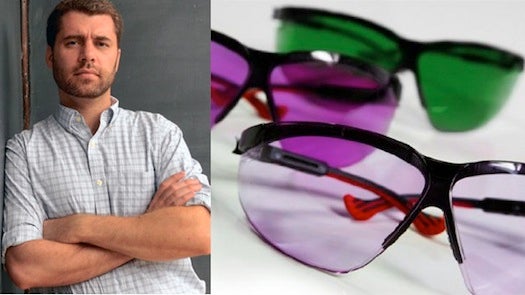 This article originally appeared on io9.

A pair of researchers from 2AI Labs have developed a wearable eyeglass device that effectively cures red-green color blindness. Called O2Amps, the technology works by leveraging our capacity to see the amount of oxygen in another person’s blood by simply looking at the hue of their skin. Developer Mark Changizi came up with the unorthodox idea after considering the evolutionary underpinnings of color vision. His unique theory eventually led to the development of eyeglasses that enable wearers to perceive emotions and social cues more clearly — and, by unintended consequence, to solve the colorblindness problem. We contacted Changizi to learn more.

One of the more fascinating aspects to this breakthrough is how it came about. Changizi, author of Harnessed: How Language and Music Mimicked Nature and Transformed Ape to Man, has a long history of investigating the various ways humans think, feel, and see. He has posited original insights as to why letters are shaped they way they are, how language emerged, and recently, why humans and other primates have color vision.

The ‘Color Vision Is for Sensing Emotions and States’ Theory

“Most mammals — your dog, horse, bunny — have two dimensions of color,” he told io9, “a yellow-blue dimension, and a grayscale (or brightness) dimension. Some of us primates, however, have an extra dimension of color vision: The red-green dimension.” 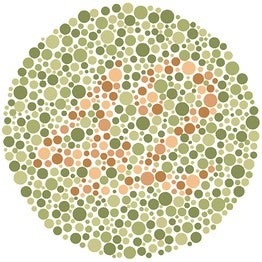 What do you see here?

The going theory, says Changizi, is that color vision evolved to help primates find fruits in the forests. The trouble with this idea, however, is that primate diets are widely variable among those who have the same kind of three-dimensional color vision that we have — and yet we all have the same variety of color vision.

“I wondered whether, instead, our color vision was for sensing others of our own primate kind, to sense the blushes and other signals we display on our faces, rumps and genitalia,” he told us. If this is the case, says Changizi, then it should be that the primates with color vision have naked spots.

And sure enough, this is precisely the case: Primates with color vision are the ones who feature bare faces, bare rumps, and sometimes bare spots elsewhere, like on the chest. Most other primates have the typical, mammal-like, furry, non-naked faces and bodies.

“Also, if my color-is-for-sensing-emotions-and-states theory is true, then the mechanism behind our kind of color vision should be peculiarly sensitive to the blood signals in the skin that underlie our skin’s ability to signal.”

Indeed, one of the principal ways in which our blood changes in order to signal is that it varies in its level of oxygenation. And for us to be sensitive to this within the visible spectrum, it turns out that we need to possess the peculiar cone sensitivities found in our M and L cones.

“They’re peculiar,” says Changizi, “because they have very similar wavelength sensitivities, which is at first glance a terrible design. Like your camera’s three uniformly-spaced color filters, R, G and B, you’d expect our cone sensitivities to be uniformly spaced over the spectrum. Yet, we primates have our M and L cones abutting up against one another. That’s only a bad idea, however, until you realize it _needs__ to be like that in order to ably sense the blood’s variations in oxygenation.”

From Theory to Practice

Working with theoretical computer scientist Tim Barber, Changizi took his theory on color vision and applied it to the eyewear device. Specifically, the duo created a filter technology that further amplified the eyes’ ability to see blood under the skin. It essentially works by removing “visual noise” from the blood signal.

Initially, they intended to use the device for practical general use. “After all, seeing these signals is what our everyday color vision is for,” he told us.

“But it occurred to us that our technology may also provide benefits for the colorblind — and it’s even mentioned in our patent — but that wasn’t our main driving thought at the time. But, as we demoed the filters more and more, we received feedback from users who were colorblind claiming that one of our technologies blew them away in its ability to ‘cure’ their colorblindness.”

Intrigued, Changizi and Barber reached out to more colorblind patients hoping to get more feedback and information about their experience. Once they made the connection between the cones and the spectral modulations that blood undergoes, they realized they could do even better.

“Our Oxy-Amp is the centerpiece of our technology — there are two others, Oxy-Iso and Hemo-Iso — and it blocks narrow bands of light which amount to noise in regard to oxygenation signals. By doing so, the Oxy-Amp further amplifies our ability to sense variations in oxygenation in the skin of others, just what our red-green perception evolved to sense. And there’s little or no cost, because the blocked bands are so narrow,” he says.

In addition to Oxy-Amp, Changizi and Barber developed two specialized technologies that correspond to two dimensions of blood changes that our eyes can sense. 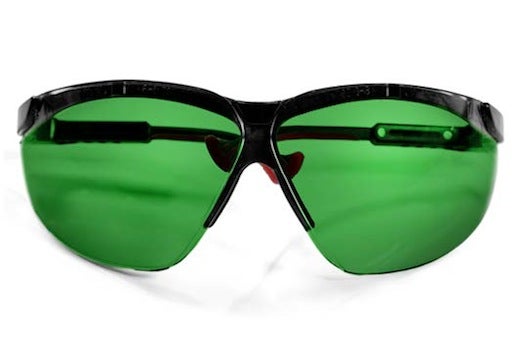 One of the variations is in the concentration of blood — what you see when you look at your palm, squeeze tightly, and let go. These are largely variations along the yellow-blue dimension. The Hemo-Iso filter isolates and amplifies this signal so that it’s extremely exaggerated, but at the expense of seeing variations in oxygenation.

The other way in which blood changes in color is on account of variations in oxygenation — which we see, for example, in our veins. These are red-green variations. The Oxy-Iso filter isolates and amplifies this signal so that it’s also exaggerated, but now at the expense of seeing the variations in the concentration of blood.

“It’s this last one — the Oxy-Iso — that provides the benefits to colorblind people,” Changizi told io9. “We weren’t too surprised, because it ‘brute-force amplifies’ the oxygenation signal — and does so at the expense of the other dimension — exactly the dimension that red-green deficient colorblind folk can’t see.”

The Oxy-Amp, on the other hand, is an amplifier of oxygenation, but a ‘less brutish’ one, he says.

It’s important to note that Oxy-Iso can only work on red-green colorblind people who have some of each of their M and L cones. If someone is entirely devoid of one of these cones, then there’s nothing to amplify.

And when the Oxy-Iso does work at helping color-blind persons see red-green differences, it also simultaneously handicaps them in their existing yellow-blue perception. “In a sense, it distributes their handicap more uniformly around the spectrum,” says Changizi.

Outside of the application to colorblindness, the two “Iso” filters — Oxy-Iso and Hemo-Iso — are principally intended for medical applications.

In fact, they can be seen as a medical imaging technology — but one in which the “camera” is the patient’s own eye, thus allowing them to directly see properties of the blood and vasculature under the skin and into the tissue. The devices can be used in the form of eyewear, or in the form of filters in front of illuminants, bathing the room in the blood-amplifying light.

The Oxy-Amp — the unit which blocks narrow bands of noise coming from hemoglobin — has many wider uses beyond (but still including) medicine. It amplifies exactly those things that our primate color vision evolved for — leading Changizi to argue that it’s not just for specialists, but for anyone.

“We’re moving to put the technology into prescription eyewear, as well as into sunwear, and into general-purpose lighting,” he says. “For example, when you put on sunglasses to reduce glare on a sunny day, you simultaneously hinder your ability to see people. But sunglasses equipped with our Oxy-Amp technology provide the shade one wants, while also amplifying our ability to see other people.”

They’re also considering its application in cosmetic lighting. “It’s not at first glance obvious, but one of the reasons youthful skin looks youthful is because the skin is more transparent, and so one can see the vasculature below it more easily,” says Changizi.

“Well, what our Oxy-Amp does is make the vasculature below the skin more salient, and that’s just to say that skin appears more transparent — more youthful.”