Would suggest running, but it's already too late, probably. 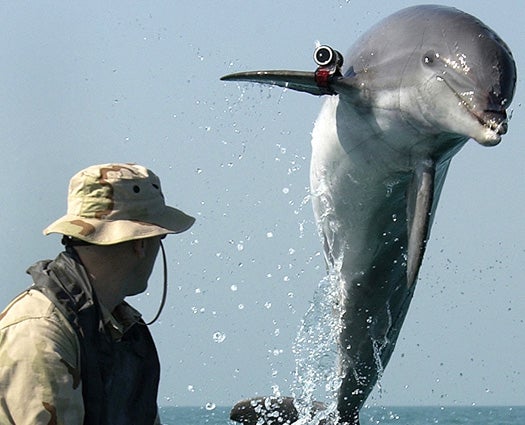 Last year, the Ukrainian Navy decided to reinstitute a Soviet-era dolphin training program. Specifically, according to reports, the dolphins had pistols and knives strapped to their heads and were taught to use them. Because, you know, WHAT COULD POSSIBLY GO WRONG.

Anyway, some of the dolphins have apparently escaped from their trainers (because of course they were going to escape, Ukraine) and into the Black Sea, possibly on the prowl for mates.

But this is a contentious program and a contentious story. RIA Novosti reports that “Ukraine’s Defense Ministry denied the reports, while refusing to confirm the navy makes use of dolphins, despite the frequent appearance in Ukrainian media of photographs of dolphins with military equipment strapped to them.” The Ukrainian Defense Ministry has called the stories outright “fabrications” and there’s some question if the dolphins were actually armed, even if the trained dolphins do exist and did escape.

As for training dolphins, that’s not all that unusual. The Ukrainian dolphins can also sweep for mines, like dolphins employed by the U.S. Navy did until they were recently retired. Although it’s not clear if they can handcuff enemy combatants like these guys could.