Did North Korea Really Launch A Missile From A Sub?

Cold war designs in the hands of a millennial dictator 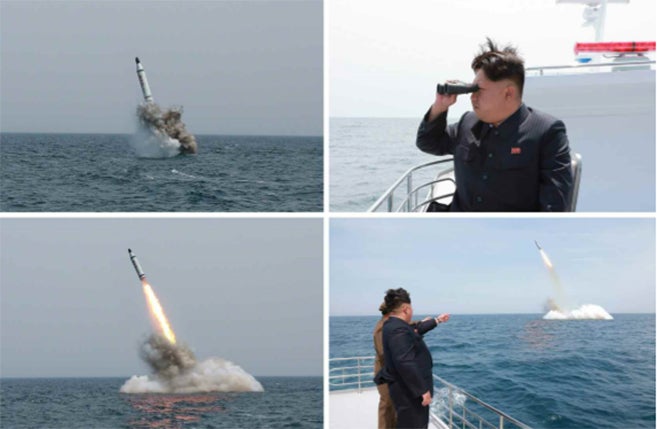 A dictator’s smile is never really a good sign. On Saturday, North Korea claimed they launched a ballistic missile from a submarine, and pictures from the launch show 32-year-old Kim Jong-Un beaming as he watches the show. His entire face is lit up in sheer joy at the test. While there’s a lot about the missile launch that warrants skepticism, it’s safe to say that the test was a success.

Submarine launched missiles are hardly new. In May 1958, Popular Science wrote about the Polaris Missile, a nuclear-tipped submarine-launched weapon that the United States was getting ready to test. With an expected range of 1,500 miles, the new tech meant that American submarines, powered by nuclear reactors and carrying nuclear missiles, could hide at sea and threaten a nuclear attack to almost anywhere on the planet’s surface. The power of these new submarines with Polaris Missiles was so great that, in 1964 author Hanson W. Baldwin said “the submarine has become the capital ship.”

Written on the side of North Korea’s new missile is the name Bukkeukseong-1, which South Korean news agency Yonhap translates to “Polaris-1.” The name is either a coincidence or a reference to the United States’ earlier (and now retired) submarine-launched missile. This weapon fulfills a North Korean ambition of acquiring such a missile of their own. While it borrows an American name, the appearance of the missile suggests it is instead based on a Soviet design. According to Yonhap, in the recent test, the missile only cleared a few hundred feet of water, which indicates that this test was about seeing if the missile could safely eject from the submarine. It will take future tests to demonstrate any range on the missile, and further tests still to see if it can work with a nuclear warhead attached.

Tempting as it might be to argue otherwise, this modest success with an older missile design was probably real. North Korea definitely has a history of hoaxes, but the photographs of the test don’t appear to be photoshopped. In the days since the loss, however, other evidence has emerged that the photos released by North Korean state media don’t capture the full picture.

Analyst Joseph S. Bermudez Jr., writing for the Johns Hopkin’s School of Advanced International Studies’s Korea Institute blog 38 North, examined the evidence of the launch and concludes that, while it was still a test of a submarine missile, it’s likely it was fired from a submerged barge. He writes:

North Korea testing a ballistic missile still isn’t great news, but an ejection test from an underwater barrage is a long way from a submarine launched missile flight. Kim Jong-Un may be smiling, but the recent test is just a suggestion of what is to come, not yet proof that North Korea can delivery a doomsday weapon wherever they want with impunity.