Which is a bargain, actually. 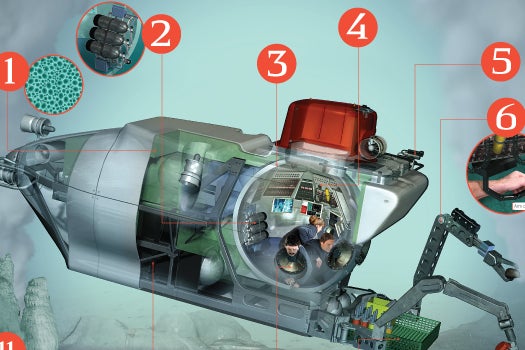 The ocean covers nearly three quarters of our planet, yet humans have probed a mere 5 percent of it. To better explore its greatest depths, scientists will soon board the revamped Alvin, the workhorse of human-operated deep-submergence vehicles. Owned by the U.S. Navy and operated by Woods Hole Oceanographic Institution on Cape Cod, the sub has logged 4,664 dives since 1964. It has explored the Titanic wreck 12 times, retrieved a lost live H-bomb, and survived a swordfish attack. Next month, engineers will begin sea trials to scrutinize its seven-year-long $40-million update (still cheaper than the $50-million-plus it would have cost to build a sub from scratch). New features include a larger cockpit with more windows, wider-reaching arms, and HD cameras. Alvin’s team also started upgrading the vehicle to withstand greater pressures. After a second overhaul, the submersible will be able to dive 30 percent deeper, to four miles—far enough to explore 98 percent of the seafloor. 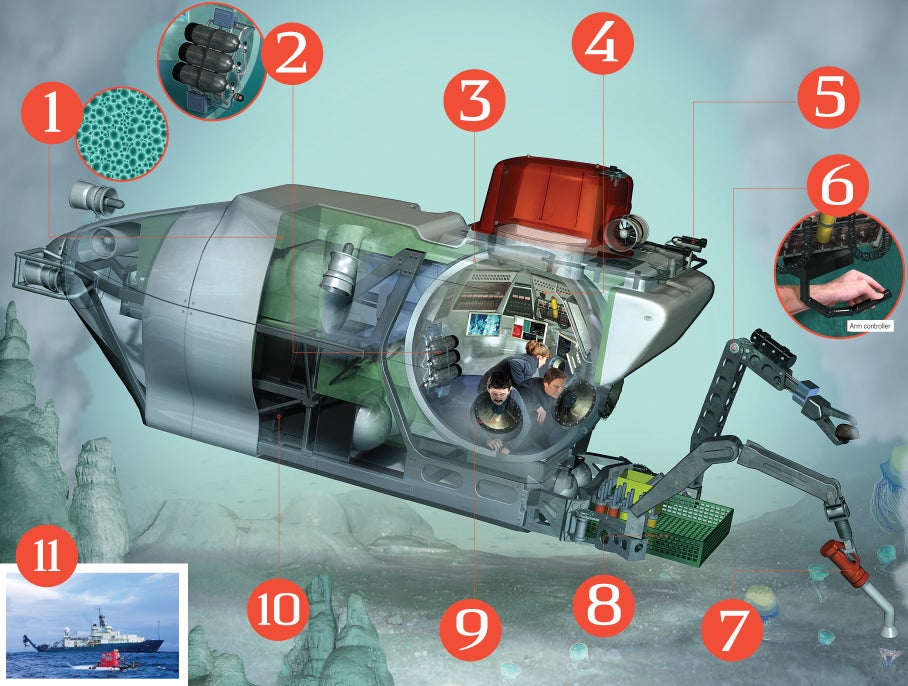 1) The sub Alvin stays buoyant with the help of syntactic foam, now rated to go four miles underwater. The foam is composed of billions of glass air bubbles the size of powdered sugar, encased in resin.

2) A life-support system includes a scrubber that removes carbon dioxide from the air and tanks of extra oxygen.

3) An 18 percent larger, seven-foot-diameter personnel sphere holds a pilot and two scientists (one more scientist than any other research sub). To ensure that the sphere can withstand the 10,000 pounds per square inch of pressure at four miles deep, builders modeled the stress it would experience underwater at half a million different locations across its surface.

4) A new hard drive can hold the 1 to 1.5 terabytes of data scientists expect to collect on each dive—an improvement over the VHS tapes and laptops previously used.

5) Alvin received three two-megapixel HD video recorders and a 14-megapixel still camera. All of them use LEDs to illuminate deep seascapes and their inhabitants.

8) Engineers made the original Alvin purely for observation and tacked on sampling equipment as an afterthought. Now a modified frame, including a stronger front platform, doubles the carrying capacity for tools and samples to 400 pounds.

9) Three forward-facing seven-inch-diameter windows have been reoriented to give the scientists views that overlap with the pilot’s. Two five-inchers now provide port and starboard visibility.

10) The sub is powered by inexpensive 5,000-pound lead-acid batteries—the same type used since its first dive. But it could go on longer missions after new lithium-ion models pass safety tests to prove that they won’t catch fire.

11) To record data from each mission, Alvin‘s mother ship, Atlantis, has been upgraded from CDs and DVDs to a hard drive. The ship, which dates from 1997, has a customized hangar and crane to transport the sub.