What Manhattan Would Look Like In A Nuclear Blast [Infographic] 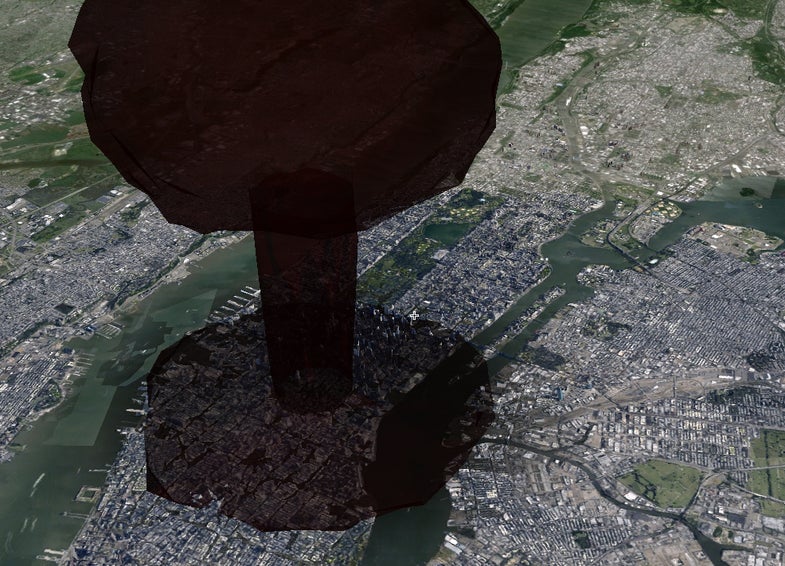 The Cold War might be over, but that hasn’t made the threat of a nuclear blast any less upsetting. Especially when you visualize it in 3-D, as Alex Wellerstein has done here.

Wellerstein is a historian of nuclear weapons who created a series of map widgets that let you simulate nuclear blasts of the size, and in the location, of your choosing. An earlier version of the NukeMap provided all of this and wind direction too, but it was a flat map, which feels as sterile and dated as a Soviet-era textbook. His latest version shows blasts in 3-D. His goal, he says, is helping “people visualize nuclear weapons on terms they can make sense of — helping them to get a sense of the scale of the bombs.” This is important because, he says:

We live in a world where nuclear weapons issues are on the front pages of our newspapers on a regular basis, yet most people still have a very bad sense of what an exploding nuclear weapon can actually do. Some people think they destroy everything in the world all that once, some people think they are not very different from conventional bombs. The reality is somewhere in between: nuclear weapons can cause immense destruction and huge losses of life, but the effects are still comprehendible [sic] on a human scale.

So here’s New York in a nuclear blast: 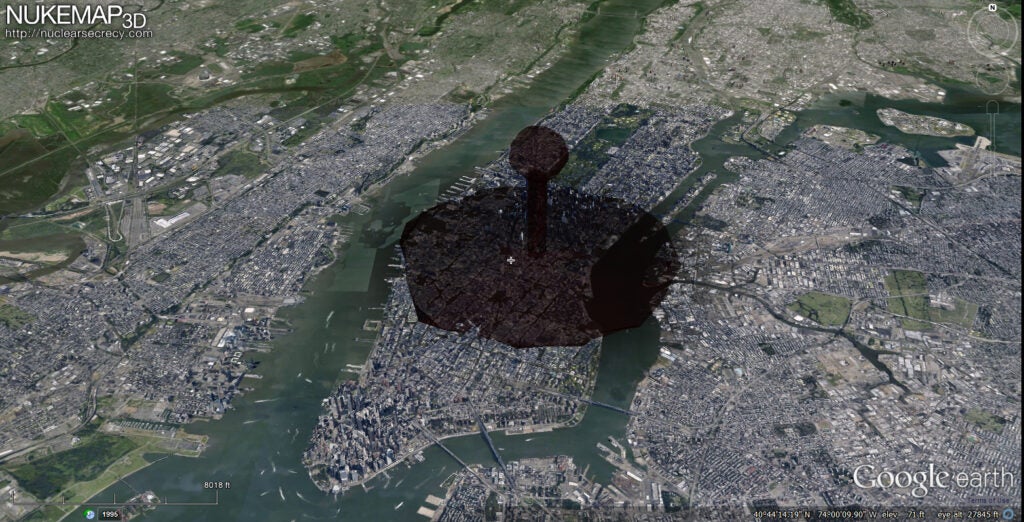 The first minutes of a nuke over central Manhattan

This is a still frame from the mushroom cloud animation. Right before this, it was just a fireball. 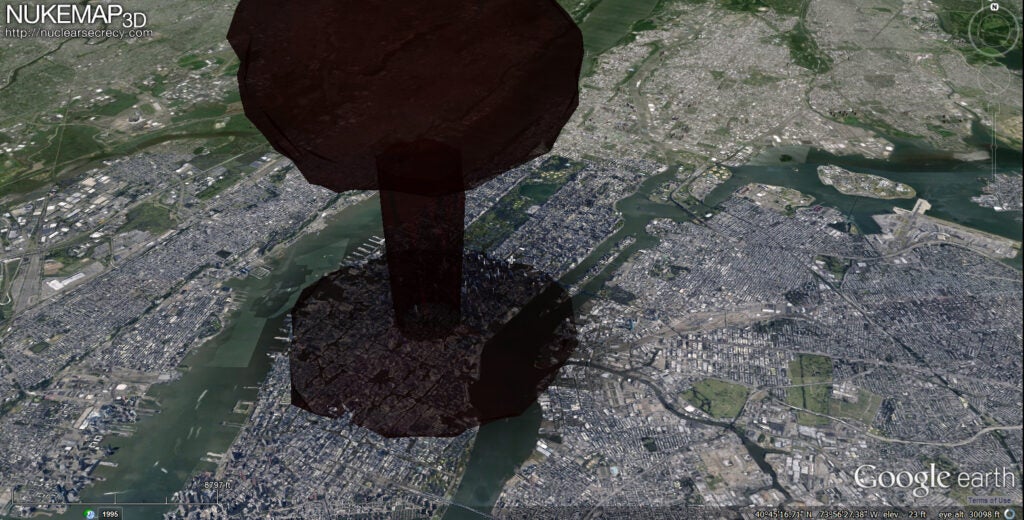 The mushroom cloud towers over the skyline

The NukeMap3D renders blasts either in animation, a completed mushroom cloud, or color-coded rings for a blast radius: 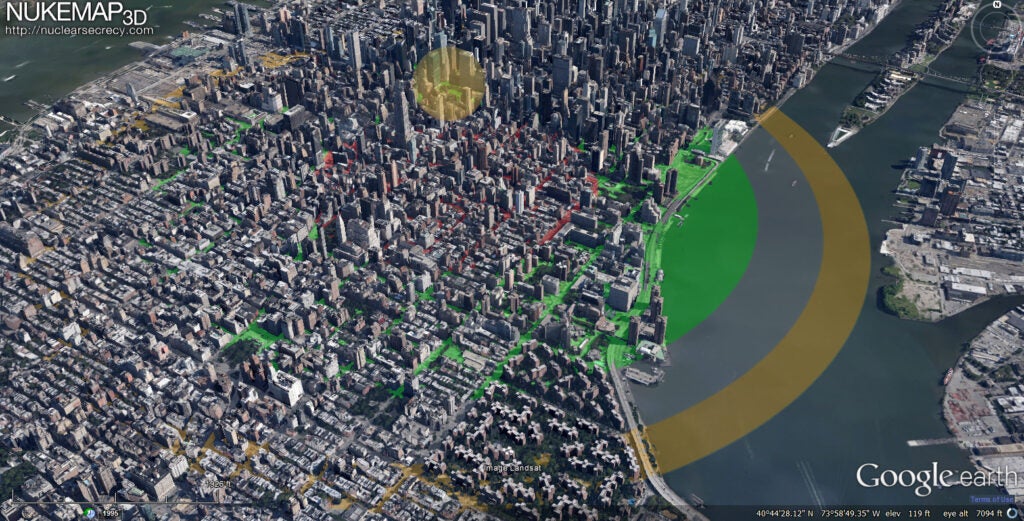 The latter format does the best job of revealing where one would need to be to survive the blast. If midtown were hit by a 10-kiloton blast–the size of the nuclear weapon North Korea tested in February–people within half a mile would be dead immediately from the blast or radiation. Beyond a mile or so away, so south of 14th street or north of 53rd, people would be safe from the majority of radiation poisoning and the skin-burning thermal radiation that comes with a nuclear blast. Popular Science headquarters, FWIW, is in the heart of midtown. Suddenly, New Jersey looks like a great place to work. 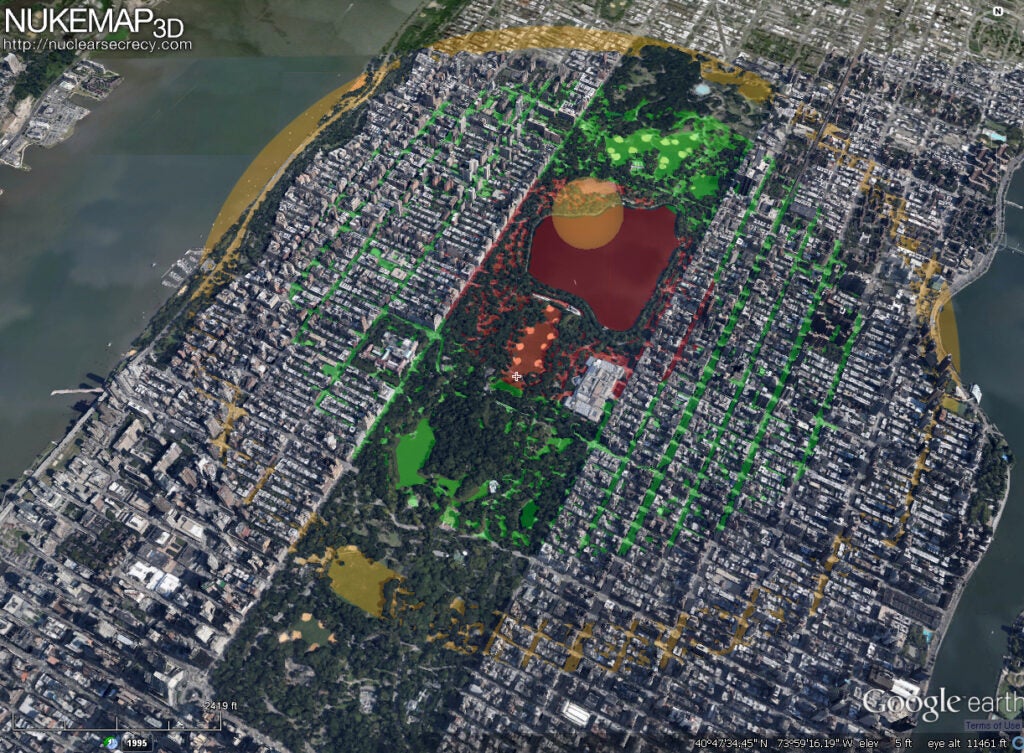 Here a nuke is set off at the southern edge of the Central Park Resevoir.
Kelsey D. Atherton