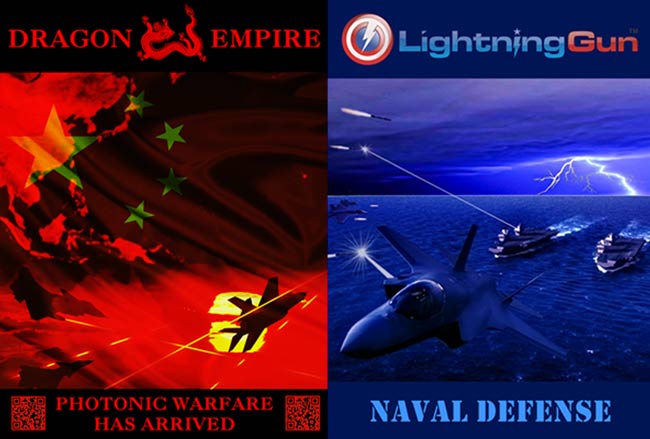 Dragon Empire, set in 2025, is a creative telling of the real-world impact that various technologies–including hypersonic missiles, satellite weapons, drones, and stealth aircraft–would likely have on a future war between two modern military powers like China and the United States. But beyond that, Weigold is funneling the book’s proceeds into his defense startup Lightning Gun Inc. which aims to produce a laser weapon that can swat guided missiles and other electronically-augmented weapons from the sky–and thus change the playing field for modern warfare.

How? Well, as Weigold told TechNewsDaily, guided missiles and bombs are a huge battlefield technology piece. Without them, militaries would have to completely shift their strategies and tactics. And Weigold thinks the way to do this is with a defensive laser EMP weapon capable of knocking out guidance systems aboard incoming munitions. All Lightning Gun has to do now is succeed where everyone who has tried before has failed.

The idea behind laser electromagnetic pulse weapons is pretty simple. A high-powered laser can strip electrons from air molecules and create an ionized ball of charged plasma in the sky. Pulsing said laser can create a kind of charged ripple from this effect–in other words, an EMP. If the EMP is generate close enough and powerfully enough in the path of an incoming electronically guided munition, its electronics will be fried. No more guidance.

But as with all laser weapons, there are complications here. For one, high-energy lasers are a huge power suck with lots of delicate components–not exactly ideal for a military that likes to be light on its feet and pack equipment that can take a beating. Then, lasers are finicky. Everything from humidity to clouds to air pressure can alter a laser’s beam path and intensity. As the DoD can attest, you can spend billions on a laser weapon and still end up with nothing.

Weigold and Lightning Gun claim to have solutions on the drawing board, and if the company can raise something like half a million dollars to get experiments set up it could possibly ask the DoD to help cover the rest of its funding needs, which are roughly $2 million (Weigold is only looking to raise $20,000 of that from his book). If he can do that, he thinks he can produce a weapon in three to four years.

That would be pretty amazing turnaround for a laser weapons program, and it’s not completely unfeasible. Laser weapons, for all of their impracticalities, are quite real. Germany’s Rheinmetall Defense recently blasted two drones out of the sky from over a mile away with its new 50-kilowatt laser system, and everyone from the U.S. Navy to the American Missile Defense Agency is toying with laser tech these days. The real question is whether they can have the impact Weigold imagines. Guided missiles are a threat, yes, but so are ballistic ones–including the one U.S. Pacific planners are most worried about, the so-called DF-21 “carrier-killer.” And if there’s one thing we know about arms races, it’s that for every defensive countermeasure you can dream up the enemy can generally think up a way around it.