FYI: Do Men Really Fall Apart When A Female Soldier Gets Killed?

There's no scientific evidence to support the conventional wisdom that women wounded in combat would destroy male soldiers' morale and performance. 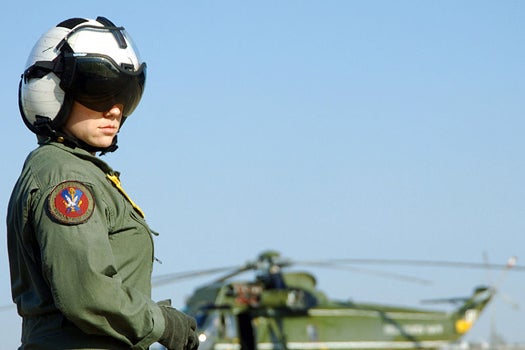 Last Thursday, Defense Secretary Leon Panetta officially lifted the ban on women serving in ground combat, opening front line positions to the more than 200,000 women serving active duty. Women had been forbidden from serving on the front lines of combat with the U.S. military since 1994.

Many European countries already allow women in combat, as well as Australia, Israel and Canada, but the decision still managed to spark controversy in the U.S. One persistent argument is that men have a natural “protective instinct” that would cause them to lose their marbles at the sight of a woman getting shot or killed. “It’s the fact that no matter what the situation in a combat roll, the male is going to be distracted because it’s natural instinct to want to protect her,” Army veteran Tim Hevrin told an Austin NBC news affiliate after Panetta’s announcement.

So is there any science behind it? Does nature hardwire men to be incapacitated by female pain?

“There is no evidence for it,” says Janice Laurence, a psychologist specializing in military issues and a principle researcher on the 1999 Congressional Commission on Military Training and Gender-Related Issues.

Despite the lack of empirical support, it has been a lingering talking point for conservatives. Prior to the 1994 ban, conservative think-tank The Heritage Foundation brought up the issue in a 1991 research report on women in combat. Quoting military historian Edward Luttwak on women fighting in battle during Israel’s War of Liberation, it alleged that “men moved to protect the women members of the unit instead of carrying out the mission of the unit.”

Two decades later, the claims are the same. In December 2012, Marine Carlos Laguna told Fox News “the screams of women, they have a big psychological effect on men… If we’re in a firefight and a woman is shot or lost her arm, male Marines like me would want to stop and help. It’s our nature to help women.”

She theorizes that one reason military men could be hesitant to allow women in combat is that they’d rather not let women witness their emotional breakdown. “In the military in general, you are taught you subdue and control your emotions,” she says. When you see your friends killed next to you, “you have to sublimate those emotions to go on.”

But no one has perfect emotional regulation, and when it fails, it could ruin the illusion of manliness in war. “My own gut feeling–I think men are a little afraid to have women in combat because they will display their vulnerability,” Laurence says.

Furthermore, as a member of the military, you do what you are trained to do, not necessarily what your instincts tell you to, according to Armando Estrada, an assistant professor of industrial and organizational psychology at Washington State University’s Vancouver campus. Even if you’re inclined to come to the rescue of a woman at the expense of the mission, you’ve been taught to react otherwise in battle.

“There are no empirical studies that can substantiate the linkage between one’s belief system overriding one’s military training,” says Estrada, who studies military psychology, with an emphasis on the career progression of women and minority groups.

Within the formal structure of military code, you are taught to adhere to a larger set of values than your own–“values that adhere to the inclusion of different groups.”

“This idea of ‘protection instinct’ is based mostly on stereotyping and not on actual behavior or research,” according to Mady Segal, a professor emerita of sociology at the University of Maryland who specializes in military personnel issues. “There is no evidence that men would protect women combatants any more than they protect their male buddies,” she told me in an email.

She also pointed out that if there were any sort of natural male urge to protect women, domestic violence and sexual assault wouldn’t be so prevalent. The Service Women’s Action Network estimate that 19,000 sexual assaults occurred in the military in 2010 (the most recent year data was collected) and “Military Sexual Trauma” is the leading cause of PTSD among female veterans. How’s that for a protection instinct?

Ask Us Anything
Military
defense
FYIs