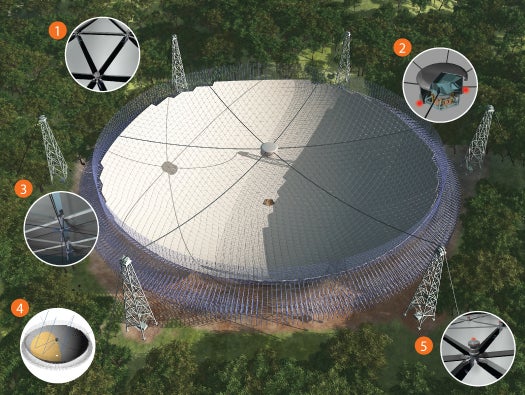 For the past 50 years, radio astronomers who wanted to study the dense, spinning remains of former stars and the structures of galaxies have gone to Puerto Rico’s Arecibo Observatory, home to the world’s largest telescope dish. The instrument (which captures wavelengths from 3 cm to 6 m) lies cradled within a broad, circular depression in the ground, creating a 1,000-foot-wide aluminum crater amid jungle hills. Soon, however, astronomers will have an even more immense instrument at their disposal: China’s $122-million Five-hundred-meter Aperture Spherical radio Telescope (FAST).

Like Arecibo, FAST will rest in a slump created long ago by the collapse of a subterranean cave, but it will be in a more remote region, with less radio interference. And FAST will have two major advantages over Arecibo’s telescope. First, its 1,640-foot-wide dish (with a surface area larger than 40 football fields) will allow it to collect 10 cm to 4.3 m radio waves across a larger area, making it more than two and a half times as sensitive. Second, since a dish this size can’t move to adjust focus, it will be made of small panels that can shift to create smaller sub-dishes to aim elsewhere.

Last fall, workers for the government-funded project finished shaping the dish’s site in Guizhou province. If the project goes according to schedule, astronomers will begin using FAST in 2016 to piece together the evolution of galaxies, search for extraterrestrial life, and detect faint, rhythmic radio pulses emanating from tens of thousands of spinning neutron stars. 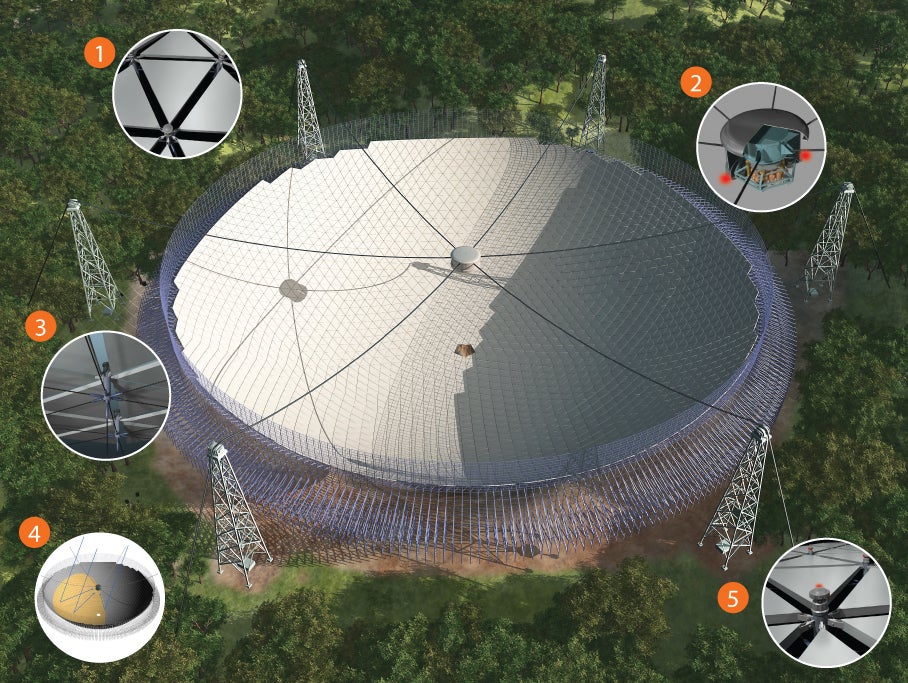 The FAST dish is 1,640 feet across and made up of 4,400 triangular aluminum panels that can turn and pivot.

A 30-ton cabin—suspended 450 feet above the dish—holds nine sets of receivers tuned to pick up different radio frequencies and amplifies them. It then sends the data through fiber-optic cables to the control center on the ground. Informed by a sensor system that reflects laser light off the cabin, cables and other mechanisms move the cabin to the focus point for any dish shape.

2,300 steel cables connect the panels to actuators on the ground. The cables move the panels with 0.2-inch precision.

4) DISH WITHIN A DISH

The main dish is too large to move as a unit. Instead, the small panels can shift to create a paraboloid dish of about half the full dish’s area. This smaller dish can aim at different regions of the sky.

To track the position of each panel as it moves, the receiver cabin bounces light beams off some of the 1,000 reflective targets on the dish and then records their reflections with three optical sensors.

Plus: Gallery: The Seven Most Incredible Telescopes In Existence