Why moving rigs to the seafloor could make Arctic drilling less risky. 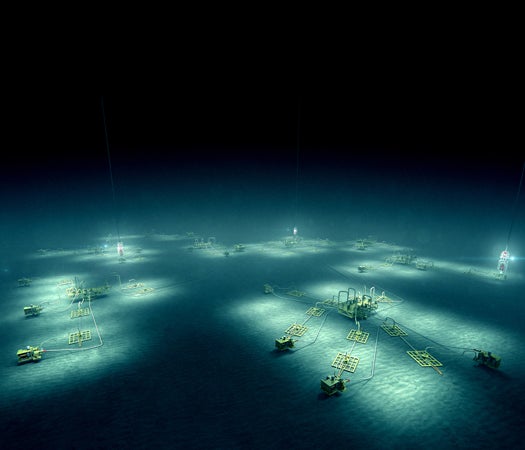 Drilling in the Arctic is a matter of when and not if. With summer sea ice having declined 30 percent since 1979 and continuing to shrink, companies are racing to prospect above 60° North. The Arctic contains an estimated 90 billion barrels of recoverable oil and 1,670 trillion cubic feet of natural gas—nearly a quarter of the world’s undiscovered supply. Royal Dutch Shell has already spent $4.5 billion drilling off the coast of northern Alaska. ConocoPhillips wants to sink a well in the Chukchi Sea by next year. And Exxon announced a partnership with a Russian company to drill in the waters north of Siberia in 2015.

But the industry’s current fleet of equipment—floating rigs and oil- and gas-processing platforms—is ill-equipped for the Arctic’s Manhattan-size icebergs and 60mph winds. To evade surface hazards, Norway’s Statoil is developing the world’s first “seafloor factory,” a platform-free oil- or gas-production system housed entirely on the seabed. The logic is straightforward. Moving operations underwater could decrease the risk posed by sea ice and violent storms—and, according to an industry website, be useful for “neatly sidestepping” the environmental issues associated with drilling in sensitive areas. For oil companies, the economics are compelling. Massive production platforms cost hundreds of millions of dollars to build and require an expensive crew to operate; seafloor factories are cheaper to construct because they are smaller and can be run remotely.

Threats to subsea installations will include icebergs shearing open wellheads and even the specter of ‘strudel scour.’In the past several years, both Statoil and Shell Oil have begun testing subsea gas compressors—a crucial piece of a factory—in water-filled pits that simulate the ocean. Because oil and gas fields lose pressure as they age, companies use powerful platform-based compressors that pressurize fuel to boost flow through pipelines. Subsea compressors are actually more efficient than platform-based ones: The closer the equipment is to a well, the less energy it needs to drive hydrocarbons through a pipeline. By 2015, Statoil expects to have deployed the first subsea compressor, but it will be attached to a platform for power. Shell’s fully underwater version will get all its energy through seafloor cables.

Much of the other technology needed for subsea factories has already been built. The first computerized subsea blowout preventer was installed on a semisubmersible drilling rig in 1983. The first subsea separator, which removes sand and water from oil and reinjects the unwanted material under the seafloor, was introduced in 2007. (And Norway’s Marine Technology Research Institute is even designing an Arctic manned submarine that will be able to stay underwater for weeks to service subsea equipment.) Companies will need to develop an underwater power and communications grid. Then, the final challenge will be integrating all the various components. “The biggest hurdle is connecting the pieces we have today,” says Rune Mode Ramberg, Statoil’s chief engineer for subsea technology. “We are doing water injection, we are doing separation, and we are now doing gas compression. It’s about putting all these things together.”

Statoil plans to assemble a subsea factory by 2020, but the challenges of deploying such a system in the Arctic are formidable. Threats to subsea installations will include icebergs shearing open wellheads and even the specter of “strudel scour”—warm river water that bores through sea ice and creates a downward jet of water that exposes buried pipelines. Various reports have also warned that efforts to contain any spill in the region would be hampered by low light, frequent storms, and—at the end of the drilling season—sea ice that renders oil skimmers useless. (After the Deepwater Horizon blowout, cleanup crews in the Gulf of Mexico recovered only roughly 25 percent of spilled oil—in warm water and calm seas.) In a worst-case scenario, one of the last remaining options would be a method still unproven in icy conditions, what the industry calls ISB, or in situ burning: tossing a match and watching as the Arctic goes up in flames.

CONTROL THE FLOW
Installed atop a wellhead, a tree uses valves, gauges, and chokes to regulate oil and gas flow.

SEPARATE IT
A separator can remove water and sand from the oil and gas “wellstream” and then pump them into a separate storage reservoir. (Wastewater can also be reinjected into aging oil and gas fields to increase their pressure.) Multiphase boosters capable of handling varying proportions of oil and gas—plus any remaining sand and water—pump the processed hydrocarbons through seafloor pipes.

COMPRESS IT
Shell’s compressor trains, which require 12.5 MW of power from a subsea electrical cable, can pressurize 15 million cubic meters of gas per day to increase its flow rate.

SEND IT TO SHORE
Umbilicals include electrical lines, fiber-optic communication cables, and tubes that carry methanol to prevent icelike hydrate plugs from forming in pipelines.