The U.S. Says It Could Stop A North Korean Missile. How?

North Korea has basically zero chance of hitting anyone but themselves with a nuke. But if they did manage to launch a missile, what technology do we have to stop it? 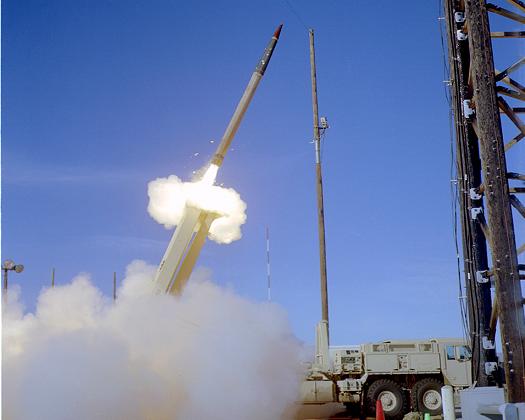 In response to questions about North Korea’s latest threats to nuke the U.S., White House Press Secretary Jay Carney said yesterday: “I can tell you that the United States is fully capable of defending against any North Korean ballistic missile attack.”

This is the most definitive statement of U.S. missile defense capability in recent memory. Earlier claims have included vague statements, promises of capability, and, at most, guesses in the 90 percent range. Missile defense is the most controversial part of nuclear strategy, and the one most dependent on successful technology.

What anti-missile technology do we have?

Currently only carried by naval vessels, Aegis is a missile that intercepts enemy missiles at short and medium range, or 650 to 3,100 miles. (There’s a land-based version in development.) Ideally, the U.S. has 16 ships equipped with Aegis deployed in the Pacific at all times, but recent budget cuts mean that currently might not be the case.

Caveats: While Aegis has done well in some tests, its systems have yet to be challenged by a missile than can release decoys. The Bulletin of Atomic Scientists warns that without successful decoy testing, the system should not be treated as effective in the real world.

The Ground Based Interceptor is designed to blow up an enemy missile outside the atmosphere by slamming into it. These are currently kept in silos in California and Alaska.

Caveats: GBI is highly dependent on precise targeting information; if the interceptor doesn’t hit the warhead exactly, and instead passes through the rocket part of the missile, it’s likely that the warhead could still continue along its original trajectory. Also, counter-measures to defeat GBIs have already been demonstrated by both Iran and North Korea.

Used primarily for taking out aircraft and cruise missiles, PAC-3 missiles are designed to intercept an enemy attack in the last stage of its flight.

Caveats: As reported in the Japan Times, “The PAC-3 missiles… will be ineffective unless an object flies directly within their 20-km range and in a straight trajectory.” PAC-3 Missiles also have a history of failures in testing.

Mounted on what looks like a souped-up flatbed truck, THAAD fires several missiles designed to slam into enemy missiles at high altitude. Works best against “asymmetric ballistic missile threats,” which is military speak for poorly made or improvised rockets and missiles.

Caveats: After a long and troubled history during the 1990s, the THAAD program seems to be one of the more competent parts of U.S. missile defense. While not primarily designed to target intercontinental ballistic missiles, it is not inherently useless against them.

Will any of this technology actually stop a U.S.-bound missile?

First, most missile defense testing is still ongoing, and none of the weapons above are yet in ideal condition. Many definitions of a successful test don’t include countermeasures. GBIs have been tested as recently as January, suggesting that the full capabilities promised have yet to be realized.

Second, these components are only part of the U.S. missile defense system. I detailed the actual things we shoot at missiles here, because those are the exciting part, but they’re all part of a broader system of electronic communication and sensors designed to provide a more comprehensive defense than any one interceptor missile alone. The system is greater than the sum of it’s flawed parts. What isn’t known is if the whole system can accommodate the limitations of imperfect parts.

Finally, it’s worth understanding the threat. North Korea doesn’t have a great record with missile launches, and while their technology has improved, it’s unrealistic to assume it has improved enough to carry the extremely heavy atomic bomb they’ve built. (North Korea right now cannot make a nuclear weapon small enough to fit onto a missile.) Also, North Korea has an almost sixty year history of provocations that haven’t resulted in renewed war. (Fun technicality: the Korean war, though halted with an armistice in 1953, has yet to formally end. This matters quite a bit.)

Failing all of the above, The Daily Show’s Wyatt Cenac has a novel suggestion: Deploy 1992-93 Chicago Bulls in major cities so that Kim Jong-Un won’t attack them.