Once seen as the future of surveillance, the Long-Endurance Multi-Intelligence Vehicle has been terminated, InsideDefense.com reports. Is the military airship revival drawing to a close? 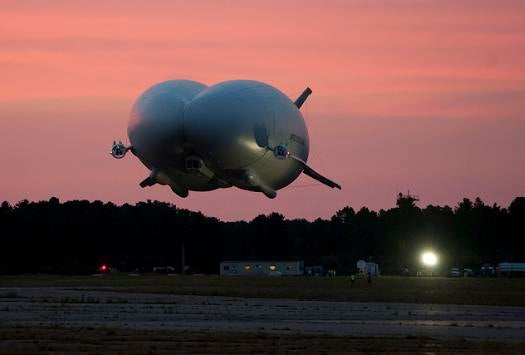 UPDATE, 6:30pm Thursday: The Army confirmed that the LEMV airship project has been canceled. Here’s the statement an Army spokesman emailed us:

“The Long Endurance Multi-Intelligence Vehicle (LEMV), a hybrid air vehicle, is a technology demonstration project administered by the U.S. Army Space and Missile Defense Command. This project was initially designed to support operational needs in Afghanistan in Spring 2012; it will not provide a capability in the timeframe required. Due to technical and performance challenges, and the limitations imposed by constrained resources, the Army has determined to discontinue the LEMV development effort.”_

InsideDefense is reporting that the Long-Endurance Multi-Intelligence Vehicle (LEMV), the U.S. Army’s hybrid airship and a Popular Science Best Of What’s New winner in 2012, has been canceled. The U.S. Army did not immediately return a call for confirmation.

Designed to stay aloft for 21 days and provide continuous surveillance, the LEMV was heavier than expected and could only “stay aloft for about five or six days,” despite two years of development and $356 million having been spent on it so far, InsideDefense reports.

Problems with development are not the only reasons for cancellation, the news site says. Designed to serve in Afghanistan, a firm 2014 deadline for withdrawing U.S. forces from the country means that the airship was a tool without a mission. Another potential problem that had not yet been overcome in development was bandwidth. As anyone who has ever tried to stream a Netflix film over a weak wireless connection knows, it can be tricky to get video to work over distances. Recording and streaming 21 days straight of video would pose a new level of technical challenges, ones that had not yet been resolved.

The end of the LEMV would mark the third modern airship to be canceled by the military, following the Navy MZ-3A airship, which was mothballed in February of 2012, and the Air Force Blue Devil 2, whose funding disappeared from the Air Force’s 2013 budget.

That said, don’t rule out the modern airship revival entirely. U.S. Customs and Border Protection, which is already becoming a home for Predator Drones, may appreciate the possibilities afforded by a potential 21-day continuous stare. When talk in Washington turns away from budget cuts, expect the idea of a surveillance airship to be floated again.