The Jets of the Future 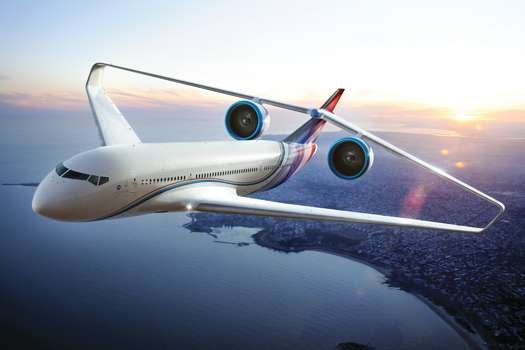 NASA asked the world’s top aircraft engineers to solve the hardest problem in commercial aviation: how to fly cleaner, quieter and using less fuel. The prototypes they imagined may set a new standard for the next two decades of flight.

Target Date: 2025
Passenger jets consume a lot of fuel. A Boeing 747 burns five gallons of it every nautical mile, and as the price of that fuel rises, so do fares. Lockheed Martin engineers developed their Box Wing concept to find new ways to reduce fuel burn without abandoning the basic shape of current aircraft. Adapting the lightweight materials found in the F-22 and F-35 fighter jets, they designed a looped-wing configuration that would increase the lift-to-drag ratio by 16 percent, making it possible to fly farther using less fuel while still fitting into airport gates.

They also ditched conventional turbofan engines in favor of two ultrahigh-bypass turbofan engines. Like all turbofans, they generate thrust by pulling air through a fan on the front of the engine and by burning a fuel-air mixture in the engine’s core. With fans 40 percent wider than those used now, the Box Wing’s engines bypass the core at several times the rate of current engines. At subsonic speeds, this arrangement improves efficiency by 22 percent. Add to that the fuel-saving boost of the box-wing configuration, and the plane is 50 percent more efficient than the average airliner. The additional wing lift also lets pilots make steeper descents over populated areas while running the engines at lower power. Those changes could reduce noise by 35 decibels and shorten approaches by up to 50 percent.—Andrew Rosenblum 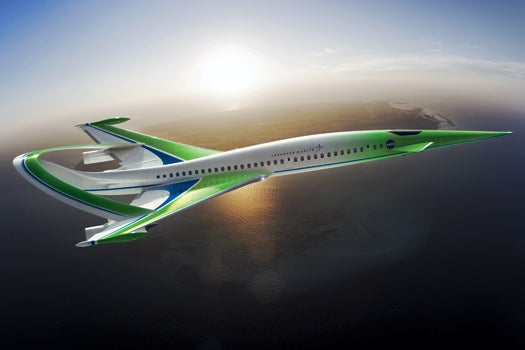 Target Date: 2030
The first era of commercial supersonic transportation ended on November 26, 2003, with the final flight of the Concorde, a noisy, inefficient and highly polluting aircraft. But the dream of a sub-three-hour cross-country flight lingered, and in 2010, designers at Lockheed Martin presented the Mach 1.6 Supersonic Green Machine. The plane’s variable-cycle engines would improve efficiency by switching to conventional turbofan mode during takeoff and landing. Combustors built into the engine would reduce nitrogen oxide pollution by 75 percent. And the plane’s inverted-V tail and underwing engine placement would nearly eliminate the sonic booms that led to a ban on overland Concorde flights.

The configuration mitigates the waves of air pressure (caused by the collision with air of a plane traveling faster than Mach 1) that combine into the enormous shock waves that produce sonic booms. “The whole idea of low-boom design is to control the strength, position and interaction of shock waves,” says Peter Coen, the principal investigator for supersonic projects at NASA. Instead of generating a continuous loop of loud booms, the plane would issue a dull roar that, from the ground, would be about as loud as a vacuum cleaner.—Andrew Rosenblum 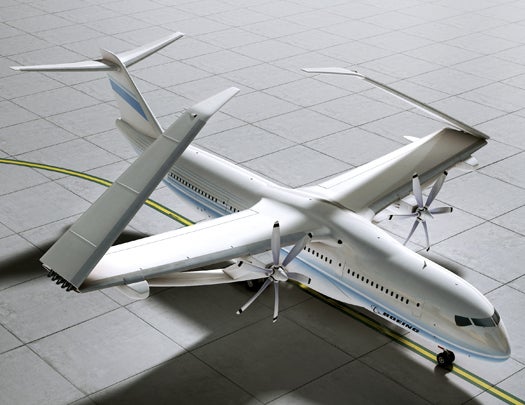 Target Date: 2035
The best way to conserve jet fuel is to turn off the gas engines. That’s only possible with an alternative power source, like the battery packs and electric motors in the Boeing SUGAR Volt’s hybrid propulsion system. The 737-size, 3,500-nautical-mile-range plane would draw energy from both jet fuel and batteries during takeoff, but once at cruising altitude, pilots could switch to all-electric mode [see Volta Volare GT4]. At the same time Boeing engineers were rethinking propulsion, they also rethought wing design. “By making the wing thinner and the span greater, you can produce more lift with less drag,” says Marty Bradley, Boeing’s principal investigator on the project. The oversize wings would fold up so pilots could access standard boarding gates. Together, the high-lift wings, the hybrid powertrain and the efficient open-rotor engines would make the SUGAR Volt 55 percent more efficient than the average airliner. The plane would emit 60 percent less carbon dioxide and 80 percent less nitrous oxide. Additionally, the extra boost the hybrid system provides at takeoff would enable pilots to use runways as short as 4,000 feet. (For most planes, landing requires less space than takeoff.) A 737 needs a minimum of 5,000 feet for takeoff, so the SUGAR Volt could bring cross-country flights to smaller airports.—Rose Pastore