NASA’s J-2X rocket engine is on the test stand and ready for its second round of tests, building on last... 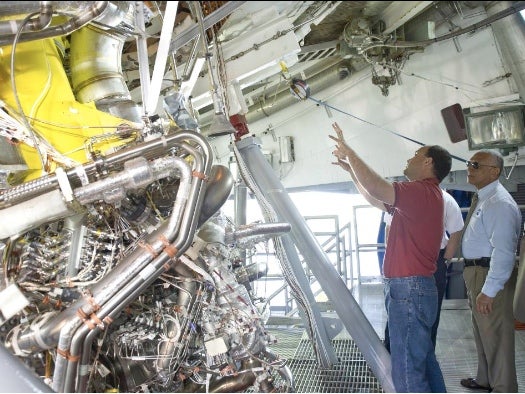 NASA’s J-2X rocket engine is on the test stand and ready for its second round of tests, building on last year’s successful test-firings that by some metrics were the most successful rocket engine firings NASA has ever undertaken. The J-2X will provide upper-stage power propelling NASA’s next-gen Space Launch System (SLS) from the upper atmosphere out into deep space after the first stage is jettisoned.

The rocket is currently on the A-2 Test Stand at Stennis Space Center in Mississippi, where it could begin firings today if everything goes smoothly. The test will continue throughout the year as engineers explore the J-2X’s envelope in simulated high-altitude, low-atmospheric-pressure conditions.

In its first round of testing last year, the J-2X reached 100 percent power in only four tests and achieved a full, 500-second flight duration burn in only eight tries–faster than any U.S. rocket engine has ever hit those benchmarks. But it still has a ways to go before it can start powering spacecraft (and people) into space. Built on the backbone of the heritage J-2 engine that launched astronauts to the moon during the Apollo era, the J-2X has some new features, like a novel hydrogen-cooled main engine novel different even from that on the space shuttle rockets.

As such, extensive testing is needed before the J-2X and the SLS can go anywhere. And while it’s something of a bummer that NASA isn’t regularly rocketing skyward right now, it is fairly awesome to watch a brand new heavy-lift rocket–the first new liquid oxygen and liquid hydrogen rocket engine rated to carry humans built in four decades–come together piece by piece. I mean, look at that engine. Badass, no?