Inside The Swarming Quadrotor Lab Of KMel Robotics

A Philadelphia robotics startup is blazing trails in the nascent unmanned systems industry by focusing on technology, and ignoring the killer app. 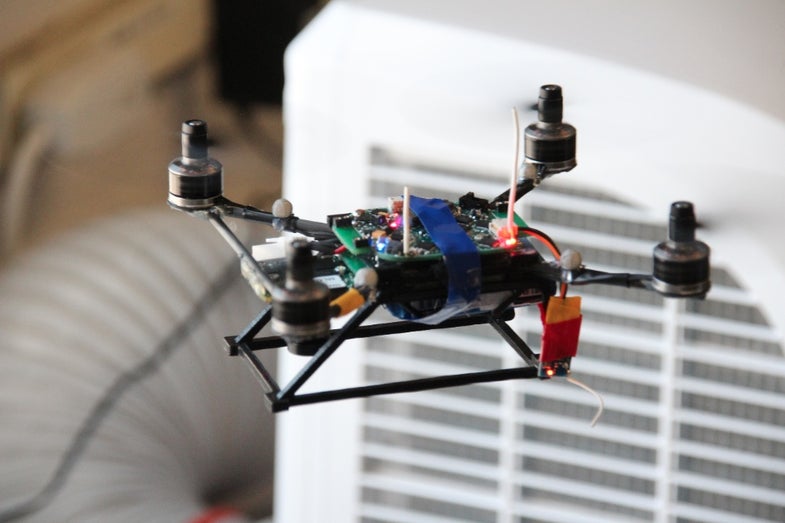 Every summer, the most creative minds in advertising and communications gather in the French resort town of Cannes, on the Cote d’Azur, to celebrate their own brilliance at the Cannes Lions International Festival of Creativity. These are the forward-thinkers, the industry’s most prominent problem-solvers, the crisply styled “creative types” who spotted the next big thing was before it was the next big thing, and then made it so. So perhaps it’s fitting that it was there, amid lavish parties and award ceremonies held for the world’s elite trend-spotters and trend-setters, that Alex Kushleyev and Daniel Mellinger, two 27-year-old roboticists living in Philadelphia, briefly grabbed the spotlight.

Kushleyev and Mellinger weren’t in Cannes to swap business cards or brand strategy over flutes of grand cru. The duo have little interest in selling cell phones or mid-luxury sedans, or anything else for that matter. In fact, that’s what makes KMel Robotics, their young startup, so unique: though they are a leader in their field, they aren’t trying to sell their technology. Kushleyev and Mellinger specialize in quadrotors, those small, four-propellor hovering aircraft that can carry small payloads and, in the right setup, work together to perform complex tasks. KMel is working far enough ahead of the curve in this space that even Kushleyev and Mellinger have no idea what the killer application for their technology is–and they’re fine with that.

That’s how they ended up on the French Riviera this past June, logging long, sweltering hours in a warehouse a short drive from Cannes’ legendary beaches while preparing the theatrical centerpiece for global brand behemoth Saatchi & Saatchi’s New Directors Showcase. Now in its 22nd year, Saatchi’s Cannes event has become something of a competition within the agency itself, with each theatrical piece attempting to outdo the previous year’s. This year, Saatchi’s creative team wanted to do something unique while playing with the theme of a “grand creator”–complete with beams of light streaming down on the audience from above and bodies zipping around overhead.

What they really needed was a swarm of precisely controlled flying robots–customized robotic hardware and software–something the average set designer would be hard-pressed to provide. What they were proposing was something that hadn’t been tried before. Someone at Saatchi had seen videos of Kushleyev’s and Mellinger’s work with swarming quadcopters on the Web, and inquiries were made. Shortly thereafter, KMel’s entire staff of two was headed for France.

The Cannes performance began life far from the sun-soaked beaches of the Mediterranean inside KMel’s modest workspace just across the Schuylkill River from the University of Pennsylvania’s Philadelphia campus. The complex of brown brick buildings was once a Dupont chemical research facility but is now owned by the university, from which KMel rents a small office and some lab space. This is not the only tie binding KMel and Penn; Kushleyev and Mellinger first met at the university in 2007, and both completed graduate degrees while collaborating on research projects at the Penn’s GRASP(General Robotics, Automation, Sensing and Perception) Lab.

“Doing this research ourselves has more value than selling it to others.”As grad students working in the GRASP lab, Mellinger and Kushleyev began constructing swarming quadrotor technology from the ground up, and it was here that they helped develop and refine the quadrotor systems that KMel–which the duo founded in November of last year–produces today. These systems operate using the same technology and principles Hollywood studios use to create computer-generated imagery (CGI) for films. Each quadrotor is fitted with tiny reflective spheres that are tracked by special motion-capture cameras (the technology comes from motion-capture specialists VICON). Data from those cameras is fed through a laptop, which can track each quadrotor’s position in space. But rather than creating motion graphics from this spatial data, this laptop command the movements of each quadcopater operating in the active space. For the Cannes performance the system precisely navigated 16 aerial vehicles around the space at once while also controlling the LED lights and articulating mirrors attached to each quadrotor.

In this sense, KMel’s current technology scheme is by definition not a true swarm–in a swarm, each quadrotor would independently sense and perceive the other quadrotors around it and respond accordingly rather than being controlled from a remote laptop. But while their current setup can accurately be described as merely swarm-like, true swarm behavior is one of the many emerging technology areas KMel is exploring. In fact, exploring the boundaries of these vehicles is KMel’s core business right now.

“Alex and I are both engineers at heart,” Mellinger says. “We really like working on broad research projects and trying to push the limits of the technology.” This marks the key differentiator between KMel Robotics and the many robotics firms, both nascent and established, plunging into the “aerial drone” space: Kmel has no real desire to develop or sell a product. Products, in fact, are potential innovation-killers around KMel’s workshop. Kushleyev and Mellinger spend their time pushing the technological envelope to the very edge rather than searching for the killer application for their technology. “If you build a product,” Kushleyev says. “Then you’re stuck with it.”

Kushleyev and Mellinger aren’t interested in being stuck with any one thing. The business keeps itself in operating cash by designing and leasing custom quadrotor hardware and software to other research groups that don’t have KMel’s expertise and don’t want to spend the time building their own hardware from scratch. That customer is often the University of Pennsylvania, where Mellinger and Kushleyev regularly work with students to help them develop research projects with hardware KMel has designed. With each hardware and software build and each experiment they help design, they further develop their own suite of technical knowledge in a field that doesn’t really exist yet. 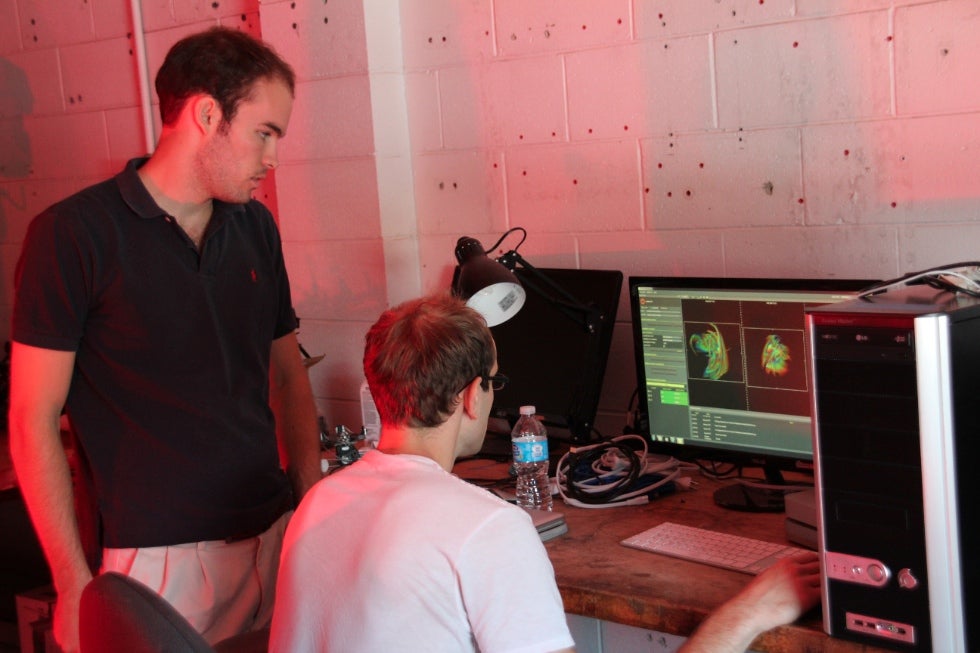 KMel generally uses a motion-capture system not unlike those used to generate CGI in Hollywood films to track their quadrotors in space and control their movements–a process that calls for a lot of coding.

But it will. Congress has mandated that the Federal Aviation Administration slowly open up the U.S. national airspace to non-military commercial and civilian drones, culminating in a complete integration of unmanned systems into the national airspace by 2015. Whether or not the FAA will hit its deadline is anyone’s guess (probably not), but legally speaking the groundwork is being laid.

In light of this, a potential market is emerging as well. Civil engineers have toyed with the idea of using camera- and sensor-equipped quadrotors and other fixed-wing drones to inspect civil infrastructure like bridges and dams. Utilities and energy companies likewise have explored using similar systems for pipeline and power line inspection and security. Various government agencies would like to use drone technology for everything from traffic monitoring to environmental sensing to wildfire spotting and wildlife tracking. Then there are applications like wide-area security and search and rescue–spaces where autonomous swarms of multiple aerial drones would make a huge impact.

“I think we’re going to see an explosion of small aerial vehicles for a wide range of activities,” Mellinger says. “There are a lot of cool applications for vehicles like these, and opening the airspace is going to enable them.” But, Kushleyev adds, we still don’t know what the killer app–the one that’s really going to push this technology into the mainstream–will be.

“We talk to venture capitalists, and they’re interested in million dollar businesses,” Kushleyev says “They come to us and tell us their point of view and how things should be happening. They do their own market research. And they’re still trying to figure out what this killer idea or application is, some product or some service.” But thus far, he says, these angel investors haven’t produced a million-dollar idea either.

So KMel is staying lean and nimble, leasing its hardware and software to other researchers and participating in that research as it happens, ignoring the urge to sell their technology or expertise even when big money comes knocking. “Doing this research ourselves has more value than selling it to others,” Kushleyev says.

That’s not to say that KMel might not one day get into the unmanned vehicle production business, Mellinger says. But it’s waiting until the timing and demand–as well as Mellinger’s and Kushleyev’s own engineering interests–are aligned before committing their research to a single project or focus. In the meantime, when Kushleyev and Mellinger don’t have students to mentor or software to code, they pursue their own whimsical ideas or entertain challenging proposals, like the one from Saatchi & Saatchi that landed them at Cannes.

The Cannes projects is a beautiful example of how this kind of technology-driven startup lab works. The application for the technology came to them rather than the other way around. It sounded interesting and challenging, so KMel gave it a shot–and succeeded spectacularly. Are psychedelic light shows the future of the quadrotor business? That’s unlikely, though it’s worth noting that in September KMel lent its technical expertise and three of its quadrotors to an interactive live art exhibit in New York City, and last year a French art exhibit consisted of a swarm of quadcopters collaboratively building a 20-foot-high tower, demonstrating that even if it’s not the killer app this technology has applications in art and entertainment.

But killer apps aside, KMel acquired a lot of experience (and exposure, as the video of their performance did laps around the Web) as well as some revenue, giving them freedom to play with other new ideas. “Most of our research projects have originated from silly ideas, like ‘Let’s build a tower,'” Mellinger says (they used their technology in the GRASP Lab to construct towers with a flying quadrotor swarm nearly a year before the French art exhibit did roughly the same thing). That’s how they keep pushing the technological envelope, developing projects that not only satisfy their own research interests, but that also explore the requirements for advanced autonomy, true swarm behaviors, and other critical capabilities. From these “silly” projects, perhaps a killer application will emerge.

Kushleyev, who sometimes unwinds by going fishing with his father, tells a story about how he once tried to figure out how to use a quadrotor as a robotic angling assistant, perhaps by rigging it with foam so it would float should it actually hook a fish and be pulled into the water. He hasn’t yet pursued the project beyond doing a little quadrotor piloting over water, but the idea is less about actually hooking a fish and more about pursuing something that’s never been tried before.

“It presents a pretty difficult control problem,” Kushleyev says of his potential project. “If you have a sling load–something dangling, like a fish–it’s very difficult to control the vehicle, especially if that thing is heavy and moving. But if you put a GPS on it, you could have an automated fishing vehicle. It flies around, and when it detects a fish is on the line it brings it back to you.” He’s half joking, but it’s clear he’s seriously thought this through.

“Maybe that’s the killer application,” Mellinger deadpans. It’s not, but that likely won’t stop the guys at KMel from giving it a try.