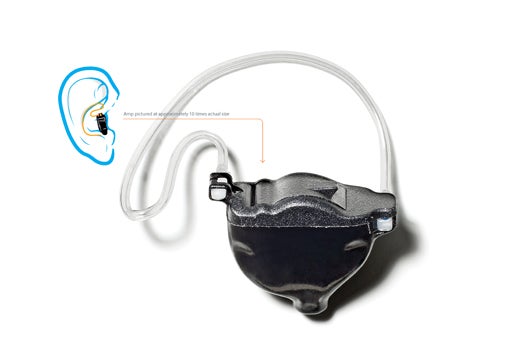 Of the estimated 36 million Americans who report some level of hearing loss, as many as 20 million have mild to moderate conditions, in which they struggle to pick out voices in cacophonous settings. Although the condition is common, treatment is limited. Custom-fitted hearing aids, which can be adjusted according to an individual’s needs, cost as much as $3,000. Users can instead opt for cheaper, over-the-counter amplifiers, but those simply increase the volume of all ambient sounds and do little to help in conversation. To address the needs of this group, the Colorado company Able Planet reconfigured the noise-canceling circuitry from its headphone line and created the first over-the-counter device that isolates and amplifies voices.

Just as in a pair of noise-canceling earphones, a microphone in the dime-size, in-ear Personal Sound Amplifier feeds noise to a microprocessor. Rather than eliminating sounds by generating competing frequencies (or by using metamaterials), though, the Amplifier’s processor isolates and selectively amplifies vocal frequencies (starting around 80 hertz) while dampening ambient sounds. The company’s signal-processing algorithm also adds a slight high-frequency boost to voices, allowing them to further stand out without the need for additional—and potentially harmful—volume. If a user still has trouble hearing, he can force the Amplifier to retune by cupping his hand over his ear. The mic senses the echo of the eardrum off the hand, and that signals the processor to quickly adjust its levels, ensuring that the wearer won’t miss a word.

HOW TO PROTECT YOUR HEARING

For musicians, Etymotic’s earplugs reduce loud sounds, such as feedback, by nine decibels while amplifying soft tones by six decibels. Each plug has a processor that identifies unsafe increases in sound and lowers the volume before it reaches the inner ear.
Etymotic MusicPro $399/pair