It wasn't the full redesign some were expecting, but the iPhone 4S improves on its predecessor in small, meaningful ways 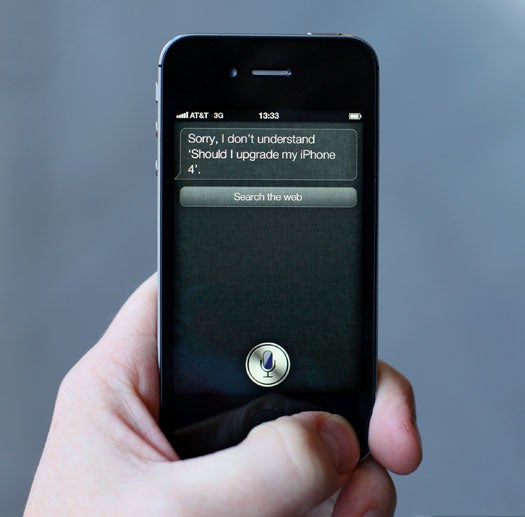 People wanted an iPhone 5. A top-secret new phone to deliver previously unknown pleasures, and to cast the 16-month-old iPhone 4 into the rubbish heap of planned obsolescence.

But the news on October 4, coming just a day before Steve Jobs’s death, was a reminder that not every Apple announcement blows off the roof. So here’s the 4S–faster, Sprint-ier, with a better camera to see the world, and Siri, the voice-recognition assistant to better listen to it. And the proverbial question: is it worth an upgrade?

Like the iPad 2, the iPhone took a class-leader and subtly but smartly improved it, without breaking any moulds. In this case, there were literally no moulds broken: the iPhone 4S, save for a few variations in its aluminum antenna to improve the iPhone 4 “death grip,” is physically identical externally.

But unlike the iPad, which is the undisputed tablet leader, the iPhone has some competition in the very-nice-smartphone market, most of them running Android and, more recently, a few of them running Windows Phone. So while the decision becomes a bit more complex, it’s tough to find a smartphone package as powerful, elegant and self-contained as an iPhone 4S. But do not despair, iPhone 4 owners: much of the new magic is bottled in the iOS 5 update.

As usual, the iPhone 4S’s processor gets a bump from the iPhone 4’s A4 to what Apple calls the A5–the same processor family found in the iPad 2. The camera, now at eight megapixels up from five, shoots 1080p video and has an improved lens and sensor. And then there’s Siri, a voice-recognition software assistant that Apple says can only run with the 4S’s stronger processor.

Everything new is good. Compared with running a fresh install of iOS 5 on an iPhone 4, the A5 processor boosts performance across the whole operating system. It doesn’t blow the A4 chip out of the water, but in a touch interface, even small gains in responsiveness as you swipe and tap from screen to screen make a huge difference in your perception of speed.

I can also verify the camera improvements are legit. Noise levels in low light are still not as good as my S90 point and shoot, of course, but they’re significantly better than the iPhone 4, which was already pretty adept in low light. In many more well-lit situations, image quality is actually getting pretty close to a high-quality point and shoot when you’re looking at the photos on-screen. Colors are natural, tap-to-focus works, and with iOS 5’s lock-screen camera button and the option to use one of the volume buttons for shutter release, the iPhone 4S is a pretty solid camera that you always have with you. That’s great. (Our friends at Popular Photography will be publishing a more technical test very soon).

And then there’s Siri. Early reviews were swept head over heels with her, but she and I have had a bumpier start. Siri misunderstands what I’m saying fairly often–I don’t know if it’s because I still have a hard time speaking naturally to my phone, because it’s what I think she wants? Maybe it’s because I’ve never in my life had a personal assistant, and I’m just not quite comfortable with the social norms of such a luxury, and she can hear that in my voice. Or maybe we just weren’t meant to be?

When we do click, the effect is undeniably pretty magical (which is why this is filed under “What’s Good”). I’ve especially enjoyed talking to Siri through the headset microphone while walking–squeeze the button, ask “are there any Radio Shacks nearby” (I needed a camera battery!), and if all is understood, the results are ready in your pocket when you pause at the next crosswalk. That’s pretty nice. I can imagine the effect is even more satisfying for drivers. 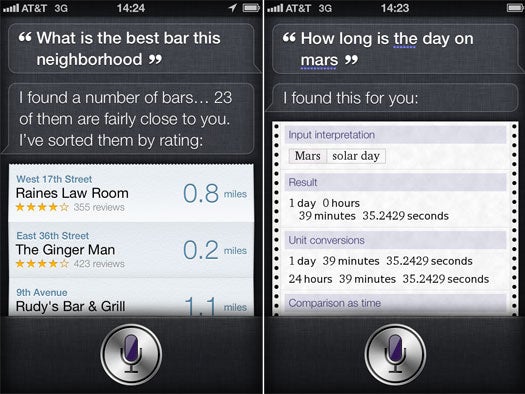 Some of Siri’s more on-point suggestions

I work in a tough neighborhood for good bars, but she did her best. Some interesting things are possible with Wolfram Alpha as a data source.

But generally speaking, I don’t use voice control that often. This first week, my brain often says “Hey, let’s play with this new thing Siri” when I need to look something up, but I can already feel the novelty wearing off–I’m more comfortable with touch. Whether voice control becomes a long-term thing for you is, like all relationships, a personal matter.

Otherwise, everything that was great about the iPhone 4 remains great here: the design (antenna problems have been improved, says Apple), the overall feel of the thing in your hand and in your life. To me the 4S’s build is unique in small ways: When this phone buzzes, it reveals an interesting internal texture–like there’s soft wood inside. It feels good. That might classify as the most wishy-washy statement you’ll read in a gadget review today, but that such a thing registered to me as an improvement, or at least a change, shows how personal the relationship we have with our phones has become.

This gets a separate category, since you can enjoy the new iOS5 software upgrade on the iPhone 4 and 3GS as well. The architectural changes that come with the upgrade well overshadow the 4S’s hardware improvements. Wireless iTunes syncing is a god-send–you no longer have to plug in a USB cable to transfer music. Similarly divine is using iCloud to manage purchased apps and other iTunes content, which keeps all downloads automatically in sync between my computer and phone. In short, your iThing no longer requires a computer—that’s a big deal.

How well iOS5 will continue to run on your iPhone 4 is the question, but until it slows down, you’ve got yourself a brand new phone.

Fighting the urge to upgrade your iPhone 4, which you should. The improvements here are nice, but, unless you’re incredibly unhappy with the camera, or you want to kick a bad texting-while-driving habit with Siri (she’ll help you change!), you can probably find better things to do with your money. Sorry, who am I to tell you that? But if it were me, I’d wait for the real iPhone 5. If you have a 3GS, it’s probably close to two years old, and probably struggling to keep up with iOS 5. And you’re still looking at a pixel-y non-Retina display. I’d say it’s time to upgrade.

I’m not going to tell you Android people you need to switch, because again, that’s your business. But I’ve yet to use an Android phone that’s as well-designed, as complete, and as effortless as my iPhone.

The iPhone 4S is Apple smartly restraining themselves. Rather than push into a new mobile form factor every year, the pattern now is to introduce a new form factor, then improve upon it with the next release. Which means something that was already great just gets better.

If you have an iPhone 4, gnash your teeth and wait. If you don’t, this is a buy.

UPDATE, Oct. 29: In the days following the publishing of this review, I started to notice some battery life issues. They started subtly, but are now more noticeable: By the end of a day, starting with a full charge with only moderate usage, my batter is about dead. With the iPhone 4, I could make it two days on a single charge pretty easily. And judging by this support thread, I’m not alone. We’ll keep an eye on it, and see if a software update can fix.