The Most Advanced Mixing Board

Hollywood sound engineers refine and combine hundreds of individual recordings on advanced mixing boards. Here’s a close look at their tool of choice 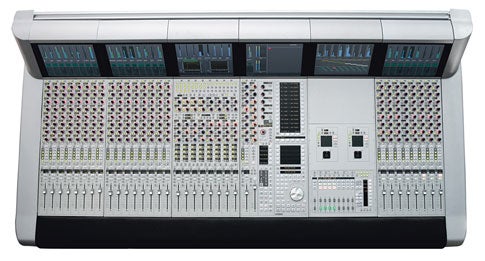 Consider a scene from a hypothetical Hollywood thriller: Our heroine, filled with dread and whispering into her cellphone, walks slowly down a dark hallway toward a closed door. The sounds that make this scene come alive—-her voice, her footsteps, the creaking floorboards, the background music—-began as a bunch of prerecorded digital files on a hard drive. It took a sound engineer’s touch-—and a machine like the Euphonix System 5—-to blend them into the final, seamless soundtrack.

The System 5 works as a giant keyboard for controlling a computer called the DSP SuperCore, which sits in a separate rack and stores recordings of music, dialogue and sound effects. Each recording, called a channel, can be assigned to one of the 1.5-inch-wide channel strips on the System 5’s surface. Each strip works like an ultra-sophisticated version of your home stereo’s controls; one dial adjusts bass, another treble, and so on. Faders, the sliding controls at the bottom of each strip, control volume.

Sound and Screen
While mixing our hypothetical thriller, the sound engineer turns a knob on the strip assigned to the actor’s voice to make it sound fuller and cut through the background music. On another strip he adds bass to her footsteps, which were recorded in a sound studio and sent to the DSP SuperCore as digital files. Then he adjusts the panning controls slowly so the sound fades from right speaker to left, mirroring the on-screen action. Using a different channel strip, the engineer raises the volume of the background music. On another he adds new, muffled voices—-they’re coming from behind the door. You slide closer to the edge of your seat.

How the Mixing Magic Happens 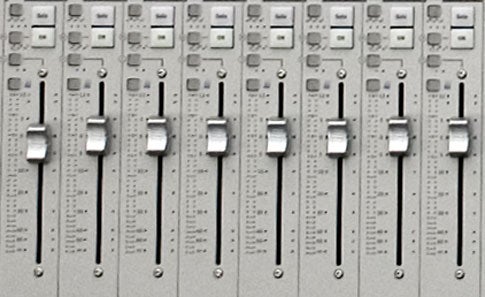 Each fader controls the volume of a different sound source

Control-surface Modules
Each control-surface module contains eight channel strips that sound engineers use to tweak audio files stored on another computer, the DSP SuperCore. Each channel strip is assigned to a single audio file—-a voice, for example, or the sound of footsteps.

Channel Strips
The fader and the eight knobs on each strip are customizable, so engineers can push a button and turn any given channel strip from an eight-knob equalizer—which could be used to adjust the characteristics of a voice to make it deeper and more audible over the background music—to an effects processor that adds little tricks like echo, reverb and delay.

Film Module
This module can assign sounds to different speakers in a surround-sound system, to make it seem like that onrushing airplane flew right over your head.

Master-control Module
module This module takes the various audio files assigned to different channels and combines them into a single exportable stream of audio that eventually makes it into the final movie soundtrack.

LCD Screens
Each module has a screen that can display signal volume, frequencies and other channel information, so that engineers can know at a glance when to make adjustments, like raising the volume of dialogue in relation to the level of gunfire.