These $30 headphones can go a long way—just don't tell your audiophile friends. 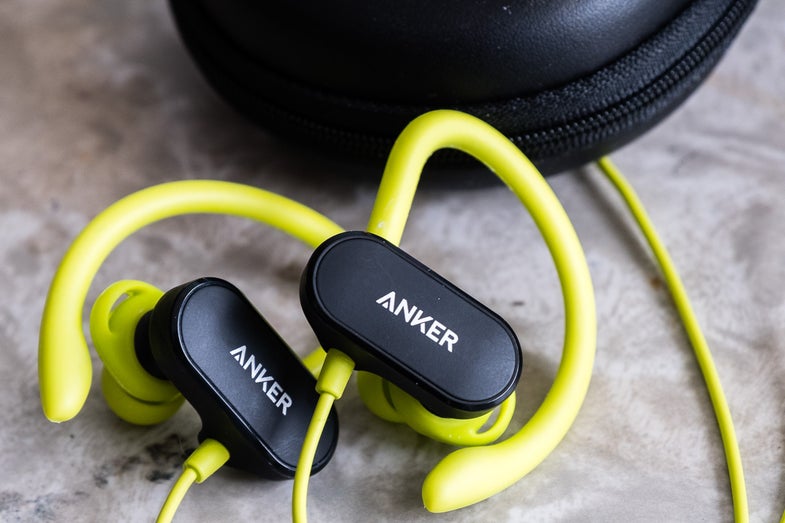 As a tech writer, I’ve been lucky enough to experience all kinds of fancy and expensive headphones. I’ve tried everything from custom in-ear monitors like rock stars use on stage to lush audiophile-friendly headphones with leather ear cups so soft you’d think you’re wearing two servings of flan strapped to your head. But the truth is: Expensive headphones are great, but they’re not for every situation or even every person.

The Anker Soundbuds Curve only cost me $20 (on-sale from a regular $30 price), but they do a lot of things I like and illustrate some of the key differences between expensive cans and a no-frills option that saves money, while still doing a great job pumping tunes into your head holes.

These headphones are “wireless” in that they connect to a device via Bluetooth rather than a cable, but the buds themselves are connected with a cord that have an in-line microphone and volume controller. It’s a familiar form-factor used by lots of other headphones like the Jaybird Freedom and the Bose SoundSport.

They claim a battery life of up to 12.5 hours, as well as water-resistance thanks to a hydrophobic coating on the outside. They fit like typical rubber-tipped earbuds, but also have a rubber wing that fits in your ear canal to secure them in place, and a plastic hook that goes over the back of the ear to keep them from flying off.

You won’t be surprised to hear that these headphones don’t sound as good as a pair that costs five times as much, like those from Jaybird, Bose, or Sony. The bass is OK, but it doesn’t really “thump” as hard as you might like when listening to Wu-Tang. The midrange is also just OK, which means if you listen to a lot of fast metal music like Napalm Death, things get a little muddy. If you listen to Ed Sheeran, which every other headphone and speaker reviewer seems to, it sounds fine, I guess. It sounds like Ed Sheeran. Take that for what it’s worth.

So, the SoundBuds are not on-par with the high-end stuff, but you shouldn’t take that to mean they are objectively bad. I didn’t notice much distortion when the volume was cranked, even if they could stand to be a little louder. And they don’t sound “tinny,” which is typically the product of cheap, underpowered drivers.

The noise canceling also can’t quite compete, especially when it comes to Bose, the unofficial champions of canceling noise. The Anker phones do a good job of blocking out external noise, especially when they’re sealed into your eardrums, but it’s not quite enough to block out the constant rumble of a train.

This is where the comparison between high-end and cheap headphones gets more interesting. The first thing I noticed when I synced the Ankers to my phone is that they use a simple and a very puny blue LED light to indicate they’re ready to pair. Fancy phones typically offer an extravagant startup sound, and sometimes even a voice that tells you they’re ready, like with the Jaybirds. While it’s a nice feature, it’s something that’s easy to live without. Shaving down extras like that are what let these sell for such a cheap price.

Despite the no-frills process, the Ankers synced without a problem. It would be nice for them to tell me how much battery I have left like the Jaybirds do, but as a trade-off, Anker crammed these with more than 12 hours of battery life on a single charge. I didn’t use them for 12-hours consecutively, but I did use them for an entire week of going to the gym and running errands before they finally died.

Bluetooth 4.1 handles the Anker’s connectivity, which isn’t as fancy as Bluetooth 4.2 like you’ll find in more expensive models, but the connection still seemed rock solid. I easily used them walking around my house and even the gym without the connection breaking up.

If you have a flagship phone like the Samsung Galaxy S8 or the iPhone 8 (or X) with Bluetooth 5, these won’t get the full benefits of the upgrade, but right now, there are very few wireless headphones that can.

Rubber tips, a wing, and a hook keep these buds in place regardless of what you’re doing. They come with three tip sizes to fit your specific earholes—I had to step down to the small, but they fit fine. Even when I was using the medium tips, they still stayed in place without a tight seal thanks to the extra support.

The rubber accessories aren’t as supple as those that come with a pair of Bose SoundSports, but the Anker headphones are so light that I didn’t have a problem with them chafing my ears at all.

The rest of the stuff that comes in the box with the Anker headphones is actually rather impressive. If I lose the case for my pricy headphones, I might just buy another pair of these for the zipper pouch alone. It has tough foam sides and a sturdy zipper closure with nets inside. You even get a carabiner to attach it to your bag. It’s great.

The USB charging cable, however, is not great in that it’s short and feels cheap. But, it’s just a standard MicroUSB, so if you have a good one kicking around from any of your other gadgets like an older smartphone or a media stick, you can use that.

I can think of many reasons to buy these. They’re great as a backup, or a specific set of headphones of the gym. They’re good for kids, especially since they get lots of battery life when left on by accident. Or, if you’re not a stickler for sound and just want something to crank out tunes from Spotify, they’re also a great option.