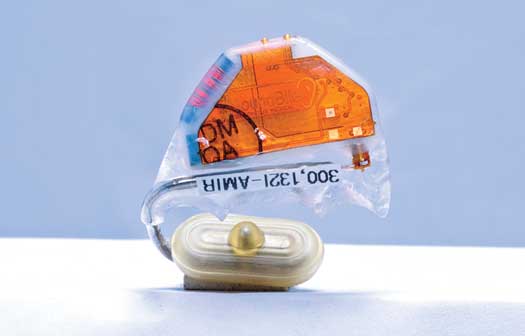 One day in 2006, stuck in bumper-to-bumper Bay Area traffic, Amir Abolfathi had a eureka moment. Formerly vice president of R&D for Invisalign, a company known for transparent dental braces, he had recently been chatting with a friend who was working on hearing aids. Abolfathi knew that bone was a good sound conductor. What if he could somehow make a removable oral hearing aid—one that could channel sound from wearers’ teeth to their ear through the bones in their head?

That moment of freeway inspiration gave rise to the SoundBite, a device designed for sufferers of single-sided deafness, which strikes about 50,000 people every year in the U.S. After his friend, Michael Benninger, an otolaryngologist at the Cleveland Clinic in Ohio, told him it could really help to solve the problem, Abolfathi set about turning his idea into reality. The biggest challenge was miniaturization, so he opted for a piezoelectric actuator, which needs very little power to generate the vibrations that travel through bone. That allowed him to use a much smaller battery, making the entire insert compact enough to fit comfortably in the mouth.

Made of acrylic, SoundBite snaps onto a user’s molars. A tiny microphone worn in the deaf ear wirelessly beams incoming sound to an electronic receiver in the molar insert, which transmits sound waves from the teeth through the bones in the jaw to the cochlea, the part of the ear that processes sound. (Traditional hearing aids only amplify sound, so they don’t work for people with non-functioning cochlea.) The battery lasts for six to eight hours at a time and can be recharged in a wall outlet. 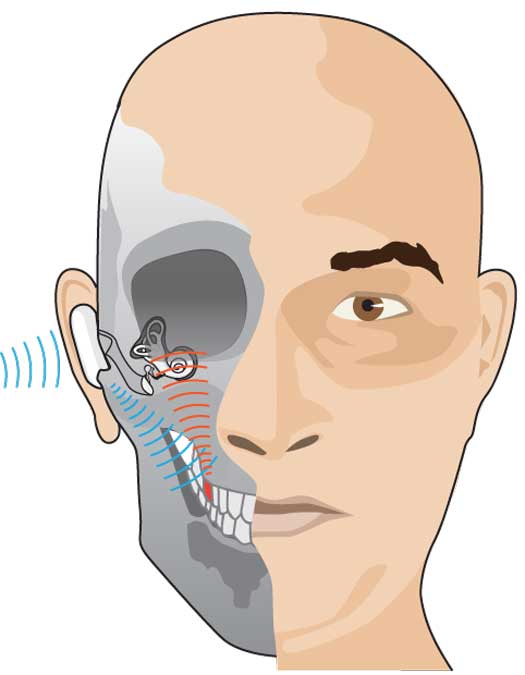 A microphone in the deaf ear beams incoming sound to a receiver on the acrylic tooth insert (placed on either side), which transmits it through the jaw to the cochlea.

The best remedy for single-sided deafness currently on the market is a bone-anchored hearing aid (BAHA), which, like the SoundBite, uses direct bone conduction to deliver sound to the cochlea. But BAHA installation involves surgically implanting a titanium post into the base of the skull. Other noninvasive tooth-based systems have been attempted, but none was ever fully developed and brought to market.
The SoundBite restores hearing just as effectively as a BAHA but requires no surgery. Instead it can be popped in and out of the mouth like a retainer. In clinical trials that wrapped up in February, patients typically reported that it restored from 80 to 100 percent of their hearing in the deaf ear and that they scarcely noticed they were wearing it. Lawrence Lustig, the director of the University of California at San Francisco Cochlear Implant Center, is so impressed with the SoundBite that he says he’ll recommend it to people who would otherwise have to undergo surgery.

If the device secures FDA approval as anticipated, it will hit the market this summer for around $6,000. (Surgery for a BAHA can run well over $10,000.) Abolfathi’s company, Sonitus Medical, plans to negotiate with insurance providers to reimburse patients for at least part of the cost. Abolfathi is also investigating other applications for the technology, including wireless, water-safe MP3 players and stealth communication for intelligence personnel. But even if those don’t pan out, he’s satisfied to know that he’s already improved people’s lives. “One patient just e-mailed and told me, ‘I saw Avatar, and it was great. I hadn’t been to a movie in years.'”