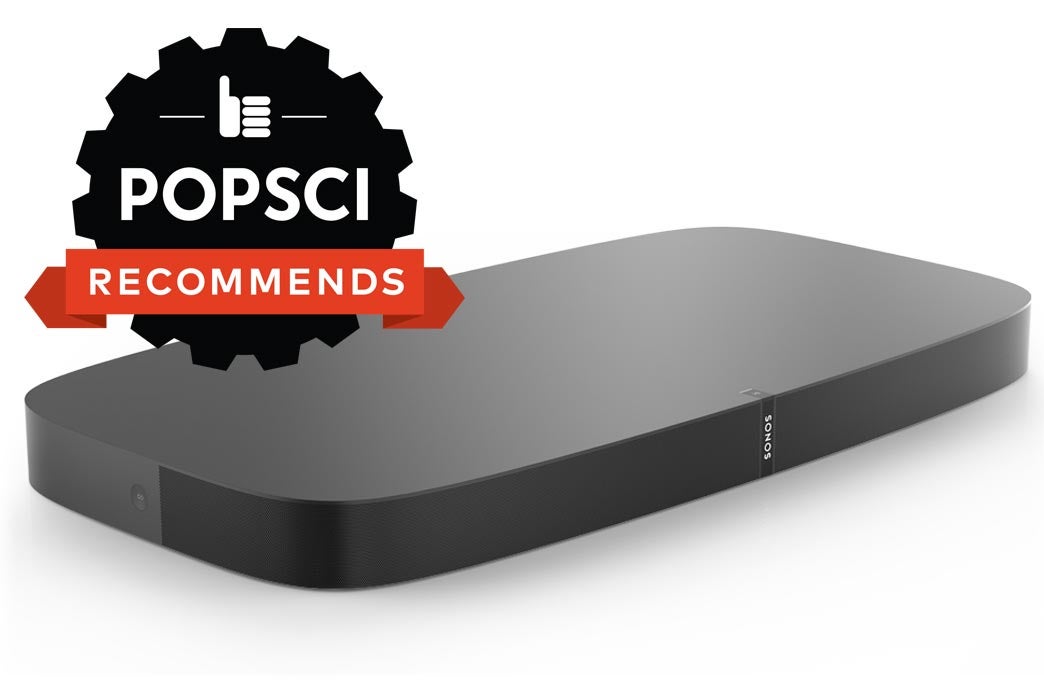 Soundbars are perhaps the easiest way to instantly upgrade a TV’s sound. But their size and shape mean they usually work best with wall-mounted, or otherwise elevated, sets. A more credenza-friendly home theater speaker, the Sonos Playbase sits under your flatscreen, not in front of it.

We plopped our own 55-inch Sony set atop the Playbase, connected the two wires that come with the speaker to the TV’s audio outputs, and breezed through the streamlined setup on the Sonos app in about 5 minutes. After adding several music streaming services (Spotify, Google Play Music, and SoundCloud) and running the company’s Trueplay room-tuning software, we settled in for hours of Netflix streaming, movie watching, and daily-mix mastering.

Still, the argument for pushing out a pedestal-style home theater speaker is sound. The Playbase’s form factor is much more suited to A/V furniture than a soundbar. What’s more, its new shape—picture a pancaked Play:5—gives the Playbase some sonic advantages, too.

The flat, elongated enclosure left Sonos engineers enough room to add a woofer. This translates into noticeably deeper, more resonant bass compared to the Playbar—which should please gamers and movie watchers. It doesn’t do the job of a dedicated sub, which Sonos also sells, but it is marked improvement over the Playbar and many other standalone soundbars we have tried.

Although it’s a mere 28-inches wide (the Playbar is 35), the Playbase produces what seems like an impossibly wide soundstage. Ten independently-amped drivers had no problem filling every inch of our 13 x 18-ft living room with sound. Voices remained clear and coherent in both movies and TV shows, and for music, stereo separation was, to our ears, indistinguishable from having two individual speakers set up on opposite ends of our six-foot wide media table.

The Playbase comes with some of the same enhancements that made the Playbar so appealing, too, including a night mode that enhances quiet noises and suppresses louder ones, as well as a voice-enhancement option that boosts frequencies associated with human speech.

But for all its undeniably great sonic performance, the Playbase is still a Sonos speaker. And that means the usual limitations still apply. TruePlay room tuning, which lets you tweak the sound of the speaker to match your room’s unique layout, remains off-the-table for all Android users. And, like all Sonos speakers, the Playbase connects via WiFi only—no Bluetooth.

Movie buffs with a large Blu-ray collections will likely want to stick with a receiver-based system, too. Like the Playbar, the Playbase only speaks Dolby Digital, and doesn’t support DTS surround sound.

For those hoping to give their music, movies, and TV shows a significant sonic upgrade, Sonos has once again engineered a fantastic-sounding home theater speaker. It’s not the most versatile and it’s certainly not the cheapest option, but it’s a simple, elegant solution that has no problem filling a room with excellent sound.

Works with: Sonos system only