The Future Of Listening Is Now Ready For Your Ears 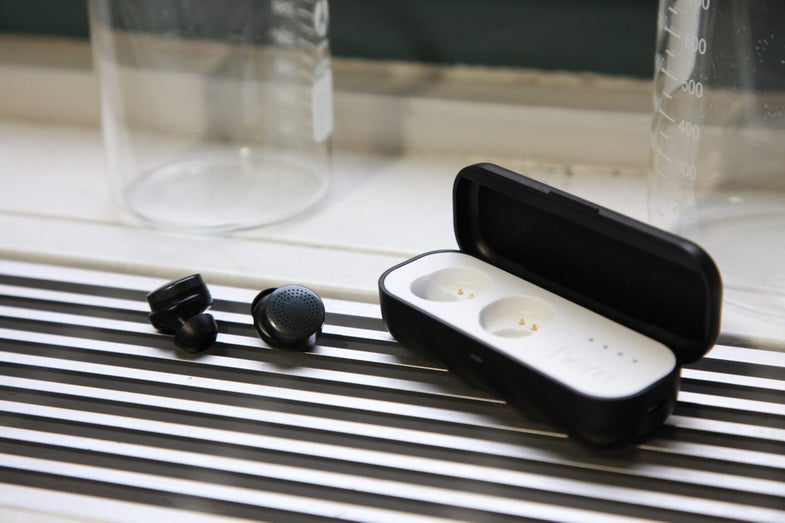 I’m standing in the middle of the subway platform, press a button on my smartphone, and the entire world seems to melt away. Everything around me is close but silent, and suddenly I’m more a spectator of the world than a participant.

I’m wearing Doppler Labs’ Here Active Listening System, one of the first in a new breed of “hearables” (although they detest that label). The Here earbuds are two tiny, wireless computers for your ears. You put them in, and everything seems normal—they can reproduce sound nearly perfectly—until you start tuning the buds to modulate the world around you.

The Here buds (which is the shorthand I’ve taken to using) aren’t really just about cutting noise out, although they can do that. Their power lies in the ability to fine-tune the noise that we’ve passively accepted our entire lives. It’s curating your listening experience.

In design, they’re simple. They’re very traditional earbuds, with a small circular bulb that holds a few microphones and a processor. All the processing of sound is done individually on each bud, and they can be calibrated to each user’s individual separate ears. Their software leverages tried-and-true acoustic techniques for noise cancellation and effects, but also machine learning algorithms able to adapt to your surroundings.

The app associated with the Here buds has three tabs: a volume knob, which is the master switch for the volume of your world; an equalizer, coupled with effects like echo and reverberation; and
a tab split into Tune In and Tune Out, which are pre-made filters meant to either enhance the soundscape or cut it out tailored to certain situations.

The Here buds don’t play music, and you can’t launch Siri from them. Right now, they’re meant for short bursts of listening. I found myself putting them in when I was walking down the stairs to the NYC subway, where they took the edge off an otherwise harrowing commute. I was walking by construction the other day, and cut out the jackhammer. But I’m wearing them now, as I type, to lower the noise of office ventilation systems and (assuredly important) chatter of coworkers. This is most of the use for us, the general people of the world.

But the main pitch by Doppler Labs isn’t for these mundane applications. Instead of cutting things out, they want people to use Here buds to make music better.

To showcase this, Doppler Labs invited a few people associated with the company and a healthy smattering of journalists to National Sawdust in December, to the first instance where a bunch of people (about 100) would be wearing the Here buds in the same room. They recruited members of Stay Human (Jean Batiste’s band on the Late Show with Stephen Colbert), a pianist from Jay-Z and Kanye West’s Watch The Throne, and a violist slated to play at Carnegie Hall later that week, to all play while wearing the Here buds.

In that room on a chilly December night, more than 100 people tinkered with an app and all heard differently. Some people liked a little more treble on the piano, others preferred bass. Some liked the reverb to model Carnegie Hall, and others preferred Abbey Road. But every person was able to take control of their experience, something Doppler Labs’ CEO Noah Kraft would describe as “very cool” (he would also use other words like “revolutionary” and “really something that’s never been done before.”)

Now, National Sawdust, a new Brooklyn space with a nearly perfect acoustics served as a perfect and imperfect place to get acquainted with the buds, before I would later receive my pair to review. Everything did already sound clear and true, which made the Here buds’ job easier (which was probably the reason for the events’ location), but it also made it easier to pick out the buds’ flaws.

There are really only two detractions I can take from all my experiences, the first being the nearly-universal hangup of talking with things in your ears. It takes getting used to, and you can also hear your own voice in a slightly unnatural way. The second is the inability for the bud’s algorithms to adapt their filters based on the how far away, or how loud, the noise around you is. For instance, I was 10 feet away from the violinist at National Sawdust, who was just hammering away at a solo piece— I knew she was going to play Carnegie Hall later, so I tossed on that filter on the app. But then it sounded like I was 150 feet away, albeit at Carnegie Hall.

A counter to the second issue is that most of the upgrades in the near future will be in the form of software. By listening to the Here buds over just the last three months, it was easy to hear markedly improved filters and noise cancellation techniques as the software evolved. And this product is still in its infancy, only beginning physical production in early 2015. The product, which starts shipment today, can be entirely different after the first software update, even in the time it takes to ship to users’ home.

Doppler Labs is shipping out their 10,000 units to their Kickstarter funders, and then are eyeing a commercial debut with a price around $250. There’s already a waitlist 30,000 people long.

But what are all those people waiting for? Kraft and I disagree.

We’re sitting in a coffee shop in Williamsburg, in another meeting to listen to the Here buds. I have the buds in, and am tuned in to better hear Kraft through the chatter.

I say that these little buds are really an augmented reality device, but Kraft disagrees. He likens them to my glasses.

“The only difference between your glasses and these is that mine are digital,” Kraft says.

This belies how the CEO thinks of this idea. It’s not a toy, or a diversion. It’s nearly a necessity, much as my glasses are to me.

The future that Kraft imagines is one where these little buds are what people use to have a conversation at speaking volume in the middle of a loud concert, because the buds know each voice and allows it to cut through the (curate) din. It’s a future with live translation through these hearables. It’s a future where people understand the power of their ears, and use his product to harness them.

These Here buds are really just the first step in a longer plan, Kraft says. This model is to test the waters and fit a very specific purpose, for those who want a better music experience with added benefit of active noise cancellation. Eventually the buds will probably add music, calls, and even maybe a virtual personal assistant.

“We have pretty lofty goals,” Kraft says. “We want to change the way you hear the world.”

A version of this article was published in the July/August 2016 issue of Popular Science, under the title “Give Your Ears Superpowers.”