When talking about a tiny wireless speaker, is bigger really better? 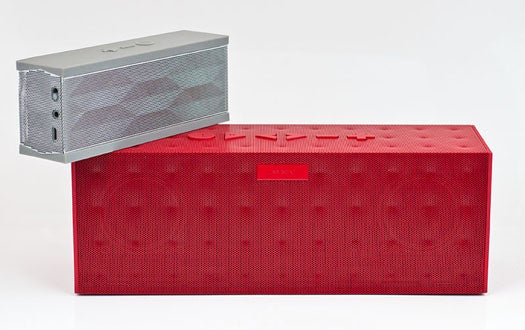 Last year, we declared the Jambox by Jawbone the “best, tiniest wireless speaker” with good reason. The six-inch brick produces an unreal amount of high-quality sound for its size, went anywhere, and paired simply with any Bluetooth-ready device. It’s great! So Imagine our glee at the first sight of the Big Jambox, which, as its extremely literal name states, is a bigger version of the Jambox. But, considering that one of the things we loved most about the original Jambox was its size, it’s natural to wonder: is bigger necessarily better? To find out, I spent last weekend using the Big Jambox for all my typical home-audio needs: cleaning music, reading music, and as a supplemental speaker during Sunday night’s Game of Thrones.

As its name would suggest, the 2.7-pound Big Jambox is the much larger successor to last year’s Jambox. The 10-by-3.5-by-3-inch speaker puts out 110 decibels from its dual two-inch drivers and a pair of central passive subwoofers. The original Jambox, by comparison, is a svelte 6-by-2.25-by-1.5 inches and produces 85 decibels from its pair of mid-range drivers and single passive subwoofer. Decibels are logarithmic, so don’t let the small number difference fool you–the Big Jambox is more than three times as powerful.

The larger footprint of the Big Jambox, of course, leaves room for more than just increased audio output. Jawbone expanded the battery to a much larger lithium-ion pack, which lasts for 15 hours on a charge; the original Jambox lasts about 10, which is already impressive. There are also more controls on the Big Jambox; to the original’s +/- volume and multifunction “Talk” button, Jawbone has added a play/pause and track forward/back. And it has an A/C jack in addition to microUSB for faster charging.

If you’re the type to use a Bluetooth speaker as a speakerphone for a paired cellphone, Jawbone has also reconfigured the mic layout on the Big Jambox to better capture voices. The mic on the original Jambox faced forward, so you had to situate yourself directly in front of it to chat. On the Big Jambox, Jawbone move the mic to the top, to the left alongside the hard controls, so that it can hear voices from 360 degrees, which classifies it as a “Type 1” speakerphone (aka: the type used in conference rooms).

At launch later this month, the Big Jambox will also be compatible with the Jawbone Companion for Android, which syncs the speaker with your calendar. When an event pops up, an alert will interrupt your music, and, if there’s a conference-call dial-in, pressing the “Talk” button automatically dials you in.

Like its younger cousin, setting up the Big Jambox takes about 10 seconds. Hold down the Pairing button on the side, discover the speaker from your device, and you’re done. If either device goes to sleep or the connection fails, press the round Talk button on top of the speaker to quickly re-connect. You can also pair two devices to the Big Jambox at once, a handy feature if one person has two devices with different libraries.

As anyone who’s heard the original Jambox would expect, the Big Jambox produces a surprising amount of sound for a 10-inch block. Saturday morning was spring clean-up day in my apartment, so I placed the Big Jambox in an out-of-the-way corner of the living room, paired it with my iMac (playing my Spotify “Cleanin’ up the House” playlist, naturally), and went about my business. It’s a solid 40 feet from one end of our two-bedroom apartment to the other, and the Big Jambox filled every inch of that space. It was so loud, in fact, that I thought about closing a nearby window that feeds into the airshaft behind the building (hard as it is to believe, not everyone necessarily loves “Nightcall” by Kavinsky).

The original Jambox had a little problem with vibrating surfaces when there was a lot of deep bass, which sort of threw the entire audio balance out of whack. Part of that is due to Jawbone’s own audio processing, which continues to favor bass as the volume decrease, so the low bassline will still remain clear and audible. The problem is also one of a small block shaking on a hard surface. No such problem with the Big Jambox, due to the addition of eight rubber feet for cushioning and more even distribution of bass due to the dual subwoofers.

Also good: Jawbone’s LiveAudio processing, which creates the impression of directional audio. It doesn’t just exaggerate and direct the left channel to the left side, it also actively cancels certain frequencies from the opposing channel to give more emphasis. It works startlingly well, especially with nature sounds, orchestral recordings, electronica, and big-band jazz. 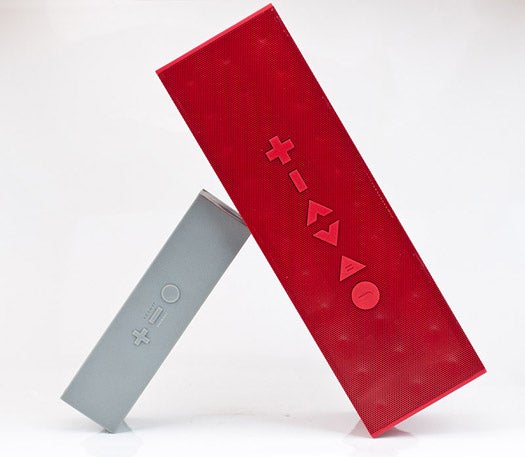 LiveAudio has its limitations. You have to be within the cone of stereo that comes from the Big Jambox, where the audio from the two speakers intersects, and if you’re closer than about two feet away, it sounds muffled, like you’re listening to music inside a cardboard box. Of course, you can physically aim the Big Jambox wherever you want, or you can just turn it off by hitting both volume buttons at the same time.

The only issue I had with sound quality was some pretty intense crackling that developed after about a couple hours of playing back Daft Punk and other electronic tracks at close-to-max volume. A quick re-pair to my iMac solved the problem. Jawbone told us that the crackling is probably due to RF interference and that they’re looking into it.

Despite Jawbone’s insistence that the Big Jambox is still a mobile product (they’re also selling a carry pouch), there is one, well, big thing working against that claim. I’ll give them that it is portable compared to other home-audio solutions, but let’s be real: It weighs almost three pounds, to the original’s 12 ounces. Quick math: that’s four times heavier, not including a couple extra ounces for the A/C charging brick, if you want to juice up faster than a microUSB will allow. That makes it much less portable than the smaller Jambox, in our book.

The Big Jambox’s ability to pair with two devices at once is also kind of a mixed blessing, since it can turn into a battle for control over the song choice. You can wrest control away from whoever’s playing music, if you want.

The Big Jambox will retail for $299 when it’s out in mid-May and will be available in white, gray and red flavors.

For only $100 more than the diminutive original Jambox, the Big Jambox feels like a bargain. But it’s not perfect: What you gain in audio output and battery life, you lose in portability. Still, I’ve never had a single speaker envelop the entire apartment the way the Big Jambox can, making it a worthy replacement for an expensive whole-home audio setup. The little Jambox — now feeling shockingly quiet — is still unmatched for travel or single-room situations, but its Big cousin will take over the house.