Predictions for 2012: Now or Never for the Standard Model of Physics 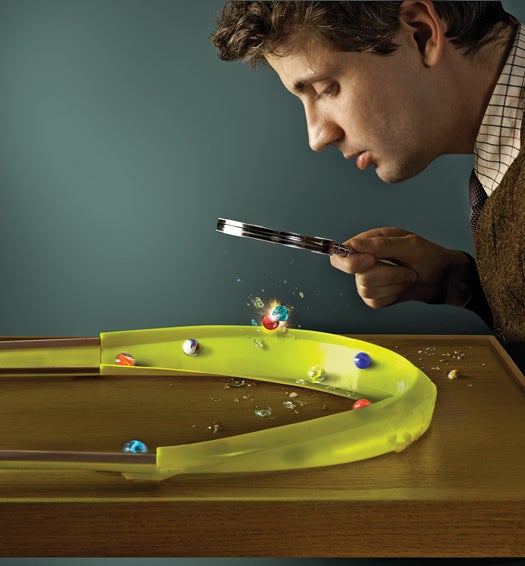 in the beginning of the beginning, the exploding hot universe was full of elementary particles, but the particles had no mass. The universe also contained force fields, and one of those fields, the Higgs, cooled and condensed into a quantum liquid. The liquid dragged on the other particles, giving them mass. The liquid rippled, and the ripples formed a new particle, called the Higgs.

It reads like a just-so story. But it’s the basis of the Standard Model of physics. And so far, physicists have found every particle the Standard Model has predicted but one: the Higgs itself. Researchers at the Large Hadron Collider in Switzerland have been looking for the Higgs for more than a year, and by next winter they will either have found it or they’ll know they won’t. “It’s not obvious,” says Andrei Gritsan, a Johns Hopkins University physicist working at the LHC, “which scenario would be more interesting.”

Physicists at the LHC look for Higgs particles by smashing other particles into each other so hard that something like a Higgs will appear out of the energy of the collision, leaving its signature in a detector. Previous experiments have suggested that the Higgs does not “live” at energies between 0 and 114 gigaelectron-volts, and physicists have now determined that 145 GeV is the uppermost limit, so they are running out of places to look.

If they do find the Higgs, they will have found something profoundly weird. The Standard Model puts all particles into two camps, those that stick together into matter and those that carry the four forces (electromagnetism, gravity, and the “strong” and “weak” nuclear forces). The Higgs belongs to neither camp, and pushing physicists to define it further gets you nowhere. “Words don’t matter here,” says Jonathan Bagger, a physicist at Johns Hopkins. “Only math does.”

If they don’t find it? Maybe it’s there but its signature is different. Or maybe the Standard Model has a fatal flaw. And if that’s the case, nobody has even a just-so story to account for mass. “It’s very exciting,” Bagger says. “It’s very scary.”