Glow-in-the-dark devices, which emit visible light after exposure to sunlight, are as commonplace as a wristwatch. But these are not... 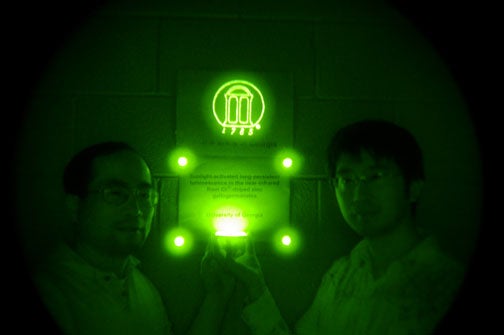 Glow-in-the-dark devices, which emit visible light after exposure to sunlight, are as commonplace as a wristwatch. But these are not that great when you want to see and not be seen — say you’re a special ops soldier checking the time while tracking an enemy. In that situation, a glow-in-the-night-vision device would be far more effective. Now scientists at the University of Georgia have invented just such a device — a new material that emits a long-lasting infrared glow after a single minute of exposure to light.

You can only see the light through night-vision glasses.

Visible-light phosphors have been around since 1996, and nowadays there’s a chemical compound for every color. They’re integrated into traffic signs, security signs, displays and much more, where they emit an afterglow hours after the light shone upon them has gone dark. Now Zhengwei Pan, a physics professor at UGA, has developed the first adaptable, long-lasting near-infrared phosphor, based on the trivalent chromium ion. Its electrons are excited in the presence of light and move to a higher energy state, then fall back to ground state. This energy loss is expressed in a flash of light in the near-infrared realm of the spectrum. But the flash doesn’t last very long, so Pan and colleagues had to trap it.

Pan et al. use a matrix of zinc and a mineral called lanthanum gallogermanate, which holds the Cr+3 ions. The matrix serves as a labyrinth that captures this electron energy release and store it for an extended period. The afterglow intensity drops quickly at first, but slows down and then decays very slowly, the authors say. At room temperature, this stored energy is gradually released in the form of a continuous near-IR light display. It can last up to two weeks, the researchers say.

They tested it in natural sunlight, color-filtered sunlight and fluorescent light, and found it works with just a few seconds of light exposure, even on a cloudy day. It works in liquid, too, including tap water, saltwater and bleach, which could make it very useful for deep-sea applications or even in living organisms. The material could also be useful in developing more efficient solar cells, nanoparticles that bind to cancer cells, or in infrared paint only viewable by people with IR goggles, the researchers say. In the image above, Pan and postdoctoral researcher Feng Liu show off a UGA logo they made using the new phosphor. There is no external light in this image, a 4-second exposure shot using a night vision monocular.

The work is published in the early online edition of Nature Materials.