Get Slinky at the Space Hotel 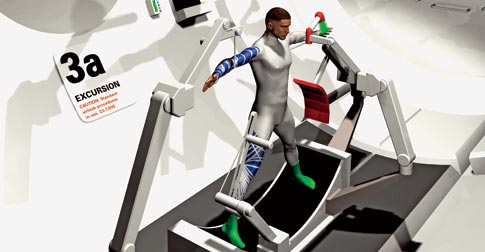 As Ansari X Prize champs Burt Rutan and Paul Allen and their band of multimillionaire brothers–Virgin Galactic’s Richard Branson and hotelier Robert Bigelow–close in on developing the launch vehicles and orbital habitats that will open space travel to the well-heeled tourist, one big question remains: What are you going to do up there? If MIT aerospace-engineering professor Dava Newman has her way, you’ll eventually be able to scout out infinite freezing darkness in a custom-made space suit that performs far better than the ones astronauts have been using for decades.

Newman is developing the materials and the design for a space suit that astronauts could use to explore Mars or the moon. But if you’ve got the cash, you could sport one, too. As a space tourist, your suit would be fabricated right on-site. First, robotic arms pirouette around you, creating a 3-D laser scan of your body. Guided by that image, the arms extrude a liquid composite of Kevlar, spandex and nylon (over an insulating undergarment), which tightens as it cures, sort of like shrink-wrap. Materials integrated into the weave will actively control thermal regulation. Most of the suit’s materials will be recycled when you are finished using it. A polymer torso shell serves as a docking point for your helmet and a frame for your oxygen tank–and maybe a holster for your digital camera. Newman’s innovation is to use mechanical counterpressure to constrain your body’s tissues, rather than a bulky layer of gas to pressurize the suit. By orienting the threads along something called the body’s lines of non-extension, she can make the suit extremely tight yet highly flexible. Thus far, Newman has been able to create a sleeve around one leg that applies the appropriate mechanical counterpressure.

The best footwear inside and out of your zero-gravity hotel will
be a pair of Velcro-like gecko slippers, based on the research of electrical-engineering professor Ron Fearing of the University of California at Berkeley. Gecko feet are covered with nanometer-size hairs called setae. What makes them grip is similar to static cling: Electrons at the end of the setae and on the surface interact to keep the two stuck together. Fearing has produced gecko fabric with a holding force of about seven pounds per square inch, but he’ll need to crowd more polyurethane setae into that space to match the gecko’s holding power–150 pounds per square inch.

Unfortunately for any spacewalker, weightlessness disturbs our physiology. To make sure everything’s OK, you might be monitored by nano-biosensors developed by University of Illinois biomolecular engineer Michael Strano, a leading researcher in nanomechanics. He discovered last year that a thin coating of potassium ferricyanide on a carbon nanotube changes brightness based on the amount of glucose in a solution. By implanting these nanotubes beneath the skin and shining near-infrared light onto them, a modified bar-code scanner could read their intensity through the skin to calculate blood glucose levels–without ever drawing blood. Today, Strano is simply trying to create a quick and painless diagnostic test for diabetics, but he’s working on reagents for cholesterol, electrolytes and stress hormones, which would be applicable to space tourists. After all, who wants to be stressed out while on vacation?

THE ROAD TO SPACE TOURISM

1965
For the Gemini program, David Clark coats a rubber and neoprene bladder with nylon mesh and a fire-resistant outer layer. An internal cable-and-pulley system helps astronauts move their limbs when the suit is pressurized.

2005
Dava Newman proves the feasibility of Bio-Suit fabrication by creating a prototype Kevlar sleeve that properly pressurizes one leg.