At The End Of The Earth: The Longest, Deepest Oil Wells In The World

On Sakhalin Island, in Russia’s far east, temperatures can fall to 35 degrees below zero. Many islanders herd reindeer. And... 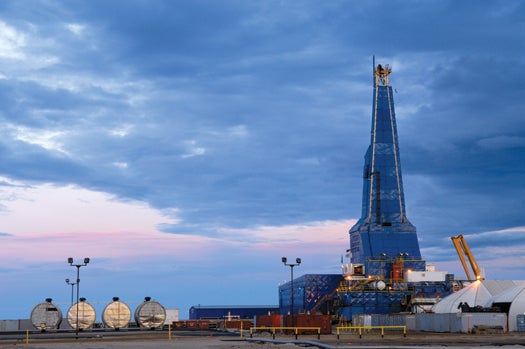 On Sakhalin Island, in Russia’s far east, temperatures can fall to 35 degrees below zero. Many islanders herd reindeer. And in January, oil crews drilled the world’s longest and deepest extended-reach well, 7.7 miles down into the ground and 7.1 miles out under the ocean. Seven of the 10 longest oil wells on Earth have been drilled there since Exxon Mobil launched its Sakhalin-1 project in 2003. Crews expect to keep breaking their previous records in the coming months.

The seven-story oil rig at Sakhalin, nicknamed Yastreb (the Hawk), is the industry’s most powerful, with four 7,500-psi mud pumps, 14,000 barrels of liquidmud storage and six generators. It has two walls to help it withstand the cold and earthquakes, which are frequent. The Yastreb’s drill torque is approximately 91,000 foot-pounds (a pickup truck operates with about 200).

Extended-reach drills travel both outward and down. To control the position and angle of the wellbore, drilling engineers use magnetometers and inclinometers; the information the tools gather is sent back by pressure pulses in the drilling fluid, which the engineers then analyze at the surface. The team – about 800, mostly Russians — pre-maps each expedition using 3D seismic imagery to create visual models of the conditions in the rock and the locations of the oil reservoir. They can reach their target with an accuracy of just a few feet. It’s as if they were standing in the middle of Central Park and drilled down to a specific doorway of the New York Stock Exchange.