Philips’ Luminous Wallpaper Will Create the Mood Lighting of the Future

We have seen the future, and it is warm and inviting 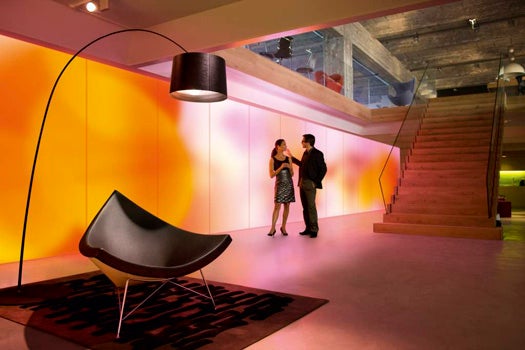 The future of wallpaper is: glowing? That’s Philips’ vision for the future it seems, as the company is teaming with Kvadrat Soft Cells to create a kind of luminous textile for the consumer market that will essentially embed adjustable LEDs in an acoustic panel that can be hung on the wall to provide ambient lighting like an active piece of artwork, or even be used as a wallpaper to bathe entire rooms in soft tones of the user’s choosing.

The acoustic panels will do a lot to muffle sound and reduce echo in large spaces, but ostensibly they could also respond visually to sounds–that is, the ambient color of the room might be programmed to respond to the music playing at any given time or integrated into other entertainment experiences (kind of like those televisions that framed their screens in ambient color, but on a larger scale).

They could also be used for a room’s primary lighting, reducing reliance on overhead fixtures and windows. That could go a long way toward creating a less sterile feel than fluorescent bulbs in the windowless interior spaces of large buildings. Currently Philips isn’t saying when its ambient panels might hit the market or at what cost, but for now the company is aiming its creation at businesses and hotel chains. Make your own price-per-square-foot determination of what this technology might eventually retail for accordingly.