In Which We Conclude Our Trip

With introspective retrospection, we consider the effects of our trip on transportation in this country 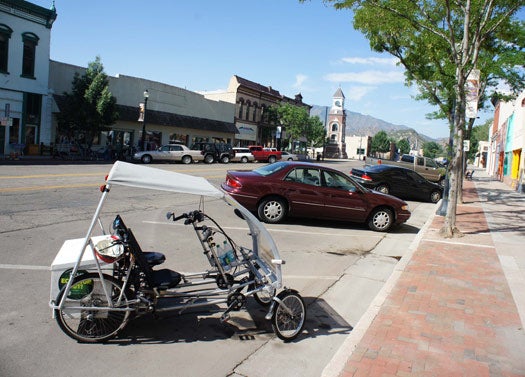 On August 11, my son and I completed our summer-long trip across the US in our prototype human-electric hybrid vehicle. Over the course of 71 days, we traveled just over 4,200 miles while consuming about eight dollars in electricity (based on national average kW/hour rates), getting a good dose of exercise along the way as we pushed the pedals to lighten the engine’s load.

We have calculated that the electric-to-human work ration was typically in the range of 60:40, though there were times when we let the motor do the lion’s share of the work. So even if we were to remove the human-powered part of the equation and ramp up the engine power to 1,000 watts or so, we’d still have one of the most energy-efficient vehicles on the road.

Sources show that the average American drives around 30 miles a day. If they used a vehicle like ours to cover those miles, they could do so for an energy cost of less than six cents, while leaving a far smaller footprint than even the most efficient gas-powered vehicle. Taken alone, those facts would seem to make a pretty strong argument for a widespread move to smaller, lighter electric vehicles. Of course, things are never that simple. Our average speed over the course of our trip was in the 12 mph range – with bursts of up to 20 on level ground, and a geared-down mountain-climbing velocity of around 6 mph. Such numbers would never do for a daily commute. Ramping the average speed up to 25 mph would likely require not twice the power, but closer to three times, as aerodynamic drag becomes a greater factor as speeds increase.

In real-world use, a faster vehicle would also beg for more crash protection and other safety features not found on our ultra-light cart. Then there is the much larger issue of road etiquette. Though we stuck to back roads whenever possible, it soon became obvious that our presence on the roadway could be problematic for other drivers. Unlike bicycles, which can traverse a narrow shoulder, our 46-inch wide vehicle often hung out into the traffic lane, requiring vehicles that wanted to pass us to either slow to 12 mph and wait for a chance to pass, or skirt dangerously close while overtaking. The use of high visibility flagging and lights helped warn drivers of our presence, but it was clear that many did not know how to react to our unusual vehicle, and I’d imagine many considered us a slow-moving disturbance that didn’t belong on the road.

In urban situations, we were not a good fit on either bike lanes or city streets, save for a few towns that had created extra-wide shoulders and dedicated cyclist lanes that were considerably wider than average. By limiting our electric drive to 750 watts, and by equipping our vehicle with pedals, we were street legal on a majority of roadways, as we were considered an electric-assist bike. Had we ramped up the power, however, we’d have entered the category of Neighborhood Electric Vehicle, which carries additional requirements and restrictions.

Ultimately, I feel that our cross-country odyssey has helped highlight the possibilities that a new generation of light, leading-edge electric vehicles could add to the nation’s transportation mix. But at the same time, it provided insight into the changes to both road infrastructure and driving attitudes that would be needed to make this class of vehicle a safe, viable option.