Some consumers may have a problem with genetically modified food crops, but in at least one case described in an... 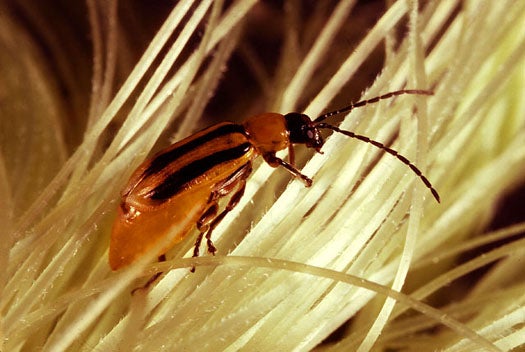 Some consumers may have a problem with genetically modified food crops, but in at least one case described in an Iowa State University researcher’s paper there’s one customer that’s happy to consume Monsanto’s GM corn: rootworms, the very pest the corn is modified to thwart. According to the paper, western corn rootworms in at least four northeast Iowa corn fields have developed a resistance to the natural pesticide in corn seed produced by Monsanto, marking the first time a major Midwest pest has developed a resistance to GM crops.

That could spell all kinds of trouble for food crops, farmers, Monsanto, and pretty much everyone who isn’t a western corn rootworm. Though based on isolated cases thus far, the problem could be more widespread, and the paper is bound to rouse another debate on the benefits and demerits of GM crop cultivation and current farm management practices.

The big problem here would be, of course, the widespread proliferation of rootworm resistance. Monsanto first dropped their rootworm-resistant corn seeds on the market in 2003 at a time when its herbicide-resistant modifications had made Monsanto’s seed extremely attractive to farmers, who could blanket their fields in herbicide and kill everything but their food crop plants. The corn seed also contains a gene that produces a crystalline protein called Cry3Bb1, which delivers an unpleasant demise to the rootworm (via digestive tract destruction) but otherwise is harmless to other creatures (we think).

The seed was so successful that it’s estimated that roughly a third of U.S. corn now carries the gene. Which means one-third of U.S. corn could potentially be susceptible to rootworm again if the resistance that has reared its head in Iowa is indicative of a larger problem.

The good news is that the same rootworms that are resistant to Monsanto’s special sauce are susceptible to a competitor’s similar-but-different GM toxin. But if rootworms can develop a resistance to one strain of GM toxin, it stands to reason that–if farming practices remain unchanged–that it could eventually become resistant to others.