Your Set-Top Box Is Murdering Your Electric Bill. Here’s What You Can Do 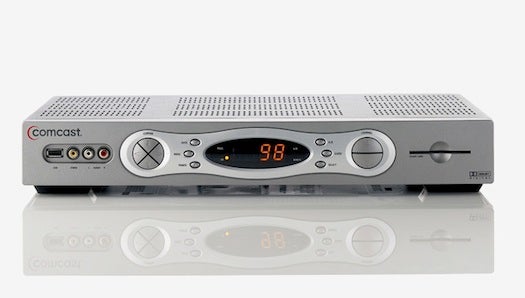 A recent study by the Natural Resources Defense Council (NRDC) made headlines when it revealed that the biggest energy drain in your house likely isn’t the fridge, air conditioner, or heater–it is, unbelievably, the TV set-top box. These ridiculously energy-inefficient boxes, typically provided by your cable company, have received little scrutiny until now, which means the cable companies have had little reason to embrace readily available methods to decrease their energy use. We’ve put together a list of the best and worst existing set-top boxes, so you can at least know what you’re getting.

First, some background. How could that little innocent cable box that provides so many hours of Monk reruns actually use more energy than a giant refrigerator? The problem is that modern DVRs and other set-top boxes aren’t regular one-function appliances; they’re just specialized computers, with a different exterior. They house energy-sucking hard drives, modern processors, HD video cards, and all kinds of other components you’d find in a regular computer. Except when you’re not using a computer, you shut it down (at least, we hope you do). Not so for set-top boxes.

The NRDC found that “Today’s set-top boxes operate at near full power even when the consumer is neither watching nor recording a show,” and that set-top boxes are only in use about a third of the time they’re running. It raises the question: Why don’t people just shut down their boxes when not in use? The answer is in two parts: First, they don’t realize they should, and second, set-top boxes take awhile to start up–like a computer (which is what they are), rather than the instant-on of a TV. Customers are not accustomed to waiting a few minutes for their TV to be available, and so leave the boxes on all the time, which in turn means the cable providers don’t have any motivation to reduce startup time, let alone make them more efficient.

The thing is, there are all kinds of options available to manufacturers that can reduce the energy use of these boxes. There could be a “stand-by” or “sleep” mode, often seen in some set-top boxes in Europe, that greatly reduce energy use when the box is inactive. Even odder, most American boxes don’t even have an actual “off” button–pressing the button labeled “off” will merely dim the clock in many cases. The only way to actually stop these set-top boxes from draining energy and raising your electric bill is to yank the plug out of the wall–cathartic, maybe, but not very intuitive.

To be fair, cable boxes aren’t whirring away, raising your electricity bill, for no reason. The benefit, at least for DVRS, of being always on is the buffer–a DVR records constantly, usually an hour of footage from whatever channel you’re watching, erasing as it goes so only the immediately previous hour is recorded. That’s why you can arrive late for Jeopardy! (not that we recommend being so cavalier about Jeopardy!) and rewind it to the beginning of the episode so you can catch the easy questions in Single Jeopardy. If the DVR was in a deep sleep mode, with the hard drives spun down, it wouldn’t be able to maintain its buffer 24/7. But there are still ways around it–you could have it automatically go to a deep sleep during hours when you’re at work and unlikely to need that buffer, for example.

Some of the cable companies surveyed promised to deliver more energy-efficient set-top boxes in the future, but many noted that without public acknowledgment or interest, there was no real motivation to spend money on less energy-hungry, more efficient hardware. If a tree falls in a forest and nobody cares that it’s raising everyone’s electric bill, why make a more efficient tree? (That analogy may not be as apt as it sounded in my head.)

We dug through the NRDC’s data and pulled out the best and worst options for most of the major cable companies. The NRDC didn’t bother with little regional carriers, in the interest of keeping the survey from being completely unmanageable, but most Americans subscribe to one of these companies–and this is information they should have.

If You Have Comcast

In terms of energy efficiency, Comcast comes out as the lesser of several evils, but not by much. Comcast’s most energy-efficient boxes tend to be slightly more efficient than their equivalents at Verizon, Time Warner, and the satellite companies, and they also offer more choices in terms of hardware. The NRDC’s data picks the Motorola DCH70 as the best standard-def box (sucking down 10W while active, and 10W while on standby), the Pace RNG110 as the best high-def box (13W active, 12W standby), and the Motorola DCX3400 as the best HD/DVR (29W active, 28W standby).

I spoke to a Comcast representative who told me that typically, the company installs whichever box they want, but that if you request a specific box that they have in stock, they’ll happily install that one for you. They won’t order you a box from elsewhere, and this kind of hardware rotates in and out of availability fairly quickly, but at least you might have the option to choose.

If You Have Verizon FiOS

Verizon’s most efficient boxes are just okay, while its least efficient are some of the worst of any surveyed. Even worse, Verizon gives the customer absolutely no option about which box they get–you can’t request a specific box at any point. That doesn’t matter too much for the non-DVR boxes, as the NRDC’s findings only turned up one standard-def and one high-def box, but there’s a big gap in efficiency between the company’s best and worst DVRs. The most efficient is Motorola’s QIP7216, at an unremarkably 29W active and 28W standby, but the older Motorola QIP6416 clocks in at a lousy 36W active and 35W standby.

If You Have Time Warner

Time Warner has a smaller selection of set-top boxes than either Verizon or Comcast, with only one averagely (in)efficient DVR and one startlingly inefficient standard-def box. For a high-def, non-DVR box, the Cisco Explorer 4250HDC is the most efficient, at 19W active and 18W standby, but Time Warner told me that that’s an older box that might be tough to find. The Time Warner rep was (surprisingly, given the company’s lousy reputation here in New York) quite helpful, and offered to try to track down one of the 4250HDCs if that was what I wanted.

If You Have DirecTV

Here we get to the satellite folks. DirecTV’s offerings are only slightly less efficient than Comcast’s or Verizon’s, with the (currently only) standard-def box coming in at 12W active, 9W standby, the best HD box (the DirecTV H24) at 16W active, 15W standby, and the best HD/DVR (the DirecTV HR24) at 31W active, 31W standby. The DVR is pretty lousy, efficiency-wise, but that’s nothing compared to the Dish Network’s craziness.

If You Have Dish Network

If You Use The Internet

Many are ditching traditional cable services for online services like Netflix and Hulu, and luckily, there are a whole bunch of gadgets that can play that content (and more) on a TV. They are also invariably more efficient than a cable box, to a startling degree. The Apple TV (reviewed here), which streams Netflix and plays music, movies, and TV from Apple’s iTunes store, uses a mere 3W while active and 0.5W while in standby. Roku‘s XR-HD, which streams Netflix, Hulu, Amazon Instant Video, and a whole bunch more, uses only 7W while active and another 7W while in standby. The Boxee Box, a curiously shaped media streamer that uses the open-source, ultra-powerful Boxee software, can play Netflix, stream video from other computers on its network, play media from a hard drive or thumb drive plugged into one of its USB ports, and stream from lots of apps (with Hulu hopefully to come soon). It was tested by an Ars Technica commenter whose measurements probably differ from the NRDC’s, but roughly estimates that it uses 13W while active and 13W while in standby.