New Bill Directs NASA Back to the Moon By 2022, With Permanent Habitation In Mind

After a rollercoaster year for NASA, it looks like Congress isn’t quite done tinkering with the space agency’s future. A... 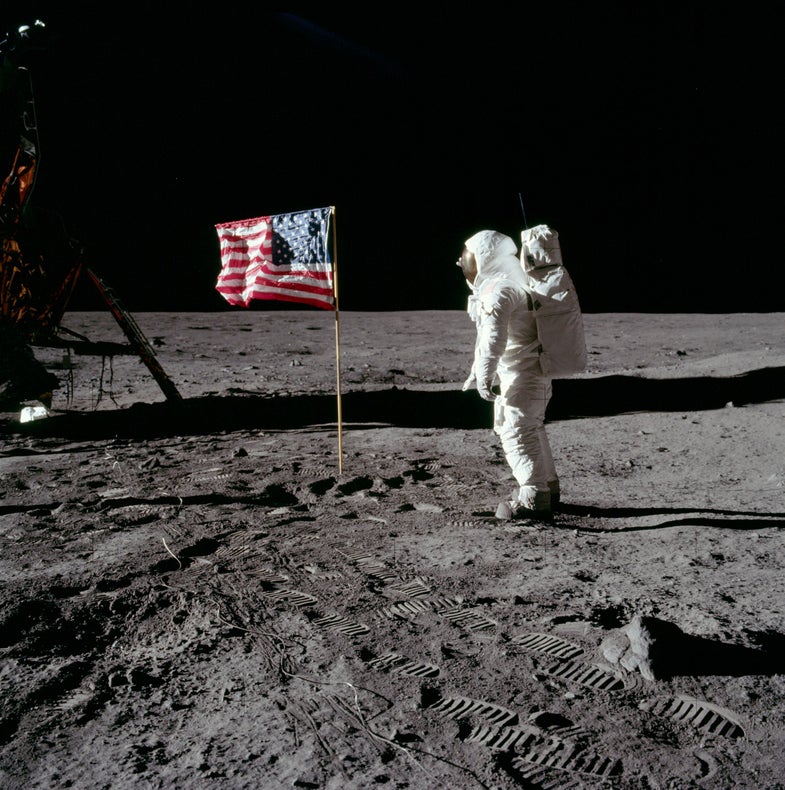 After a rollercoaster year for NASA, it looks like Congress isn’t quite done tinkering with the space agency’s future. A return to the moon is back on the table after a Florida congressman introduced a moon-centric bill in the House of Representatives, which he’s calling the “Reasserting American Leadership in Space Act,” or the REAL Space Act. Really.

“The National Aeronautics and Space Administration shall plan to return to the Moon by 2022 and develop a sustained human presence on the Moon,” the bill says, in no uncertain terms. The goal is to promote exploration, commerce, science, and American “preeminence in space,” the bill says.

In fairness, the bill spells out some convincing reasons why NASA should boldly go where it went 42 years ago — chiefly as a stepping stone for the future exploration of Mars and other destinations.

Also, “space is the world’s ultimate high ground, returning to the Moon and reinvigorating our human space flight program is a matter of national security.”

A moon base had been NASA’s goal since 2005, you may remember, after President Bush directed the agency to develop a new rocket and crew transportation system that could go back to the moon and eventually to Mars. President Obama ordered a review of these plans upon taking office. The Review of United States Human Space Flight Plans Committee, also known as the Augustine commission after its chairman, Norman Augustine, determined NASA didn’t have nearly enough money to accomplish the goal. Obama’s new course for NASA initially ditched the entire Constellation program, including the Ares rocket, but was later tweaked to include funding for a heavy-lift launch vehicle of some kind.

The problem is, there’s no clear destination for that heavy-lift rocket, and even the commercial spaceflight companies developing new crew vehicles on NASA’s behalf aren’t sure where they would go. Many space exploration advocates insist that NASA needs a destination, not just a journey. Obama has dismissed a moon mission, saying “We’ve been there before,” but some still believe the moon is a viable option for just that reason. Plus, it has plentiful resources — although this fact is strangely absent from the new bill, sponsored by Rep. Bill Posey, R-Fla.

Cosponsors include Rep. Rob Bishop, R-Utah; Rep. Sheila Jackson-Lee, D-Texas; Rep. Pete Olson, R-Texas; and Rep. Frank Wolf, R-Va. All of the above represent districts with an interest in ongoing NASA space exploration, but Wolf’s support is interesting because he chairs the appropriations subcommittee that covers NASA activities. H.R. 1641 has been referred to the House Science, Space and Technology committee.

The bill basically follows Obama’s vision, loosely defined as exploring elsewhere in the solar system: “A sustained human presence on the Moon will allow astronauts and researchers the opportunity to leverage new technologies in addressing the challenges of sustaining life on another celestial body, lessons which are necessary and applicable as we explore further into our solar system, to Mars and beyond,” the bill reads.

It simply states that NASA funding should be aligned in accordance with this goal.

With members of both parties still hammering out a federal budget, additional spending to go back to the moon seems as likely as, well, a trip to the moon. But Posey, advocating for the bill earlier this month, said a clear mission for NASA is necessary.

“Without a resolute vision for our human spaceflight program, our program will flounder and ultimately perish,” he wrote in an op-ed published in Florida Today.

Should the moon be part of that vision? What do you think?