Major League Baseball pitchers can’t wear white gloves or wristbands because they obscure the ball, making it difficult for batters... 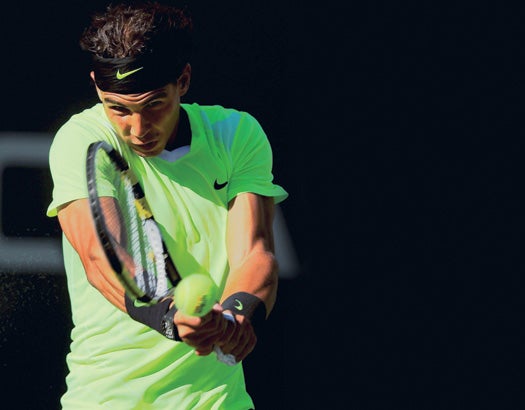 Major League Baseball pitchers can’t wear white gloves or wristbands because they obscure the ball, making it difficult for batters to gauge a pitch’s path. Professional table-tennis players aren’t allowed to wear clothes that match the ball for similar reasons, but there are no such rules in tennis.

A few years ago, optometrist Nick Dash, the chief scientific officer at the British company Sports Vision Institute, noticed that tennis pros were increasingly favoring bright yellow shirts, rackets and strings. So he decided to perform an experiment to see if wearing clothes and using strings the shade of a tennis ball was giving players an advantage.

He asked three collegiate tennis players and one national-team coach to hit 10 first serves and 10 second serves while wearing a T-shirt that was either all yellow or all blue, with a racket and strings to match. An independent observer determined whether the return shots landed in a pre-defined “good” zone. Dash kept all participants unaware of the hypothesis. The yellow and blue tests were statistically identical for returns against first serves. But on second serves—which are tougher to read, Dash says, because they usually have more spin—return shots were a quarter less likely to be in the good zone when the server wore yellow.

Dash says the study (which hasn’t been published in a scientific journal) is just preliminary, and he would like someone else to do a larger investigation. Stuart Miller, head of the International Tennis Federation’s Science and Technical Department, says the data is “interesting in principle” but that there are no plans to change the rules.