The Moon Should Be the 51st State, and Other Space Dreams From Newt Gingrich

At the sunset of Newt Gingrich’s putative presidency, the moon would be the 51st state, colonized by permanent American settlers. … Continued 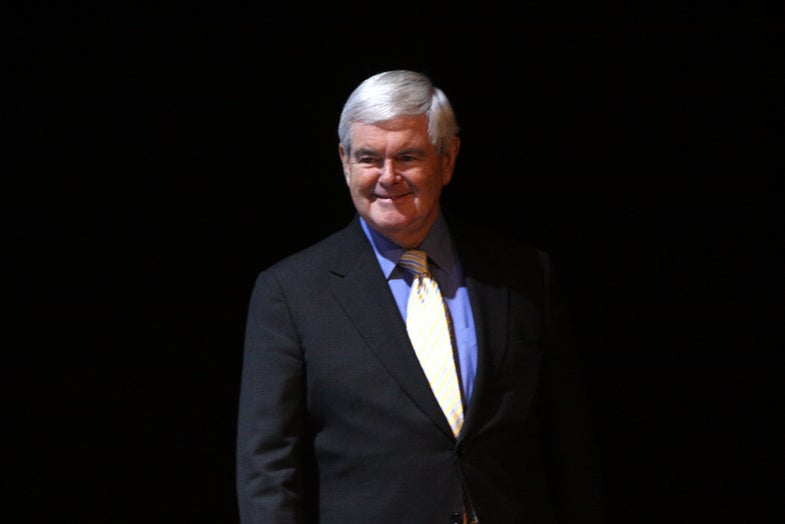 At the sunset of Newt Gingrich’s putative presidency, the moon would be the 51st state, colonized by permanent American settlers. Tourists would honeymoon in low-Earth orbit, space factories would manufacture goods in microgravity, and America would have a rocket powerful enough to send us to Mars.

This is all according to a discussion Gingrich hosted Wednesday in Florida, which holds its presidential primary next Tuesday and which lost thousands of jobs as the space shuttle program drew to a close last year. But this is Gingrich talking, so it’s safe to say this isn’t all politics. A self-professed space nut and fan of science, Gingrich has dreamt of a lunar colony for decades. Even if this dream is inherently irrational:

“The reason you have to have a bold and large vision is you don’t arouse the American nation with trivial, bureaucratically rational objectives,” Gingrich said.

It’s odd for a politician to trump his own ideas as grandiose and not rational. But hey, going back to the moon sure fires up the patriots! So America’s space goals are once again a political football — one, incidentally, that seems to rev up Republicans more than it does Democrats. Gingrich has a long list of space dreams, which we’ll get to in a minute. But this debate brings to light an interesting volley since the Reagan administration, between Democratic presidents who seem not to really dwell on America’s space ambitions and Republican presidents (and would-be presidents) who just love the idea of Americans on the moon.

Dubbing himself a “visionary” for his space plans, the former House speaker and GOP presidential hopeful compared himself to John F. Kennedy, Abraham Lincoln and the Wright brothers. But he didn’t compare himself to another conservative Republican, George W. Bush, who also wanted the U.S. to go back to the moon as a launch pad for Mars. His new vision was gestated in the wake of the Columbia disaster, and centered on the retirement of the aging shuttles, but it also sought a more ambitious future for the space agency. The Constellation program never really got off the ground, however, and critics found plenty of faults.

But contrast this with Bill Clinton’s presidency. While he was in the Oval Office, the U.S. partnered with Russia to build the International Space Station — certainly a major achievement, but it was arguably more impressive for its geopolitics than its science scope. Both countries already had space stations before, and the ISS took way more time and money to build than anyone had anticipated. Otherwise, Clinton apparently didn’t have much to say about the space program, even in his autobiography “My Life.”

Then, a while after taking office and organizing a blue-ribbon NASA review commission, President Obama harrumphed at the idea of returning to the moon — “we’ve been there before,” he famously said — and charted a bumpy course for a future NASA that will eventually visit an asteroid and someday Mars.

Now Gingrich has set his sights back on our natural satellite, with a much tighter timeline. But there is one catch — he favors private development, not necessarily NASA leadership.

As Charles Houmans notes in Foreign Policy, the space program presents a conundrum for dedicated conservatives. It’s the most unassailably awesome achievement in American history, and as such it’s fertile ground for jingoists. But it’s also plagued by huge federal spending overruns, a risk-averse bureaucracy and — let us not forget — scientists, whose findings do not always comport with the conservative worldview. Gingrich seems able to toe this boundary carefully, coupling his love of science and space with his free-market beliefs.

In a debate earlier this week, he said privately funded prizes spurred Charles Lindbergh and Burt Rutan to reach new milestones, and private incentives could do the same for lunar settlement and Mars exploration.

For his part, his rival Mitt Romney has been a little more vague and a little more NASA-centric, discussing a space agency with more partnerships with universities and commercial enterprises.

Wednesday’s talk is just the latest in a long list of Gingrich’s space ideas, some of which are wackier than others. In 1981 he sponsored an unsuccessful bill called the National Space and Aeronautics Policy Act, which set forth “provisions for the government of space territories, including constitutional protections, the right to self-government and admission to statehood,” the New York Times reported in 1995. He proposed a lunar mirror network that would illuminate highways and dark alleyways. He envisions space factories creating new opportunities for the unemployed.

“If we’d spent as much on space as we’ve spent on farm programs, we could have taken all the extra farmers and put them on space stations working for a living … in orbiting factories,” he told a science fiction convention in 1986.

But other predictions and desires have borne out. A quarter-century ago he said “space tourism is coming,” predicting Hiltons and Marriotts of the solar system. There are no space hotels yet, but space tourism is likely just around the corner.

So does anyone really think a president Gingrich would set up a successful moon base? Not really, especially given this country’s economic situation and (depending on whose hyperbole you believe) debt crisis. Gingrich has given no indications of how he’d pay for it, incentives or otherwise, and the details are sparse. And most of the reaction from space observers has been tepid at best.

Space policy expert John Logsdon, professor emeritus at George Washington University, called it a “fantasy,” according to Space.com. “It would be much better to set realistic goals, but that is not Mr. Gingrich’s strong suit,” he said.

But you can hand Gingrich one thing: At least he’s talking about American leadership in space, something that’s been sorely lacking of late. Maybe his grandiose visions will start a real conversation.