The Psychology of Semen, Part Two: Your Questions Answered 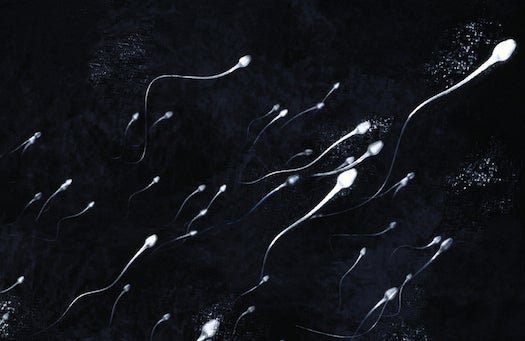 Sperm all swimming in one direction (Digital). Doug Struthers
SHARE

After my first Sex Files column last week, “Is Semen An Antidepressant?,” many people have asked some great further questions that I want to address. First and foremost, what about other orifices?

Friday I spoke with evolutionary anthropologist Gordon Gallup, Jr. at SUNY Albany again to get some answers.

Oral sex has been linked to health effects in women. Women who frequently ingest their partner’s semen have been shown to have a significantly lower risk of preeclampsia — a mysterious and dangerous pregnancy condition that is the leading cause of prenatal infant death — than women who do not swallow. The findings may seem like a stretch, but before you cry foul, consider that a number of studies have shown the same correlation from unprotected vaginal sex. Researchers theorize that preeclampsia evolved at least in part to allow women to unwittingly reject pregnancies resulting from “unfamiliar” semen. Such an adaptation would favor partners who stick around for a while, and who would be more likely to share the considerable burden of parenthood. If semen from oral sex can affect whether or not a woman carries her baby to term, who’s to say it can’t have other consequences on a woman’s body, such as affecting her mood?

Couldn’t other factors have been at work?
Some of you wondered whether hormonal birth control or the “depth” or the relationship could have affected the results of the study. The researchers considered these factors. Of the sexually active women who never used condoms, seven out of 10 were on the Pill. However, there were no significant differences in depression scores as a function of the Pill either within or across the condom-use categories. Likewise, there were no differences in depression scores based on whether women were in relationships or the length of those relationships.

Do vasectomies matter?
They might. Again, Gallup says that no one has yet studied how male sterilization affects the possible mood-boosting effects of semen. However, anecdotal evidence does indicate a correlation: “We’ve had a number of women contact us to tell us that as a result of their partners having vasectomies, they’ve experienced a return to depressive kinds of symptoms,” he says. “Prior to being in a relationship with semen exposure [the women] were depressed, but as long as they were being inseminated their depression was diminished. Now that their partner was vasectomized, the depressive symptoms returned, suggesting that vasectomy may have an impact on seminal chemistry.”

So is rape supposed to be mood-boosting?
Obviously not. Mood isn’t simply a result of our biochemistry, and the depression-alleviating benefits of semen would likely be trumped by the trauma of the rape, and the possible negative consequences, such as unwanted pregnancies or sexually transmitted diseases, Gallup says. Plus, he adds, “It may very well be the case that the anti-depressant properties of semen are dose dependent, and that repeated insemination may be necessary to get the effects.”

Should we throw our condoms out?
One commenter on this site said that Gallup’s research is a step backward for safe sex, which is a predictable concern I probably should have addressed the first time around. Gallup’s response was clear: “Don’t take this to mean that you should begin practicing unsafe sex. If you’re depressed and using condoms, and then throw your condoms away and develop an unwanted pregnancy or a sexually transmitted disease, your previous depression [could worsen].” The bottom line as I see it: Don’t switch up your routine if it’s going to put you at some sort of risk. But if you’re already having responsible condom-free sex, enjoy it — and the mood-boosting benefits you may be getting from it.