Just weeks away from the start of the tour, we found ourselves with a working chassis, but without a body-like... 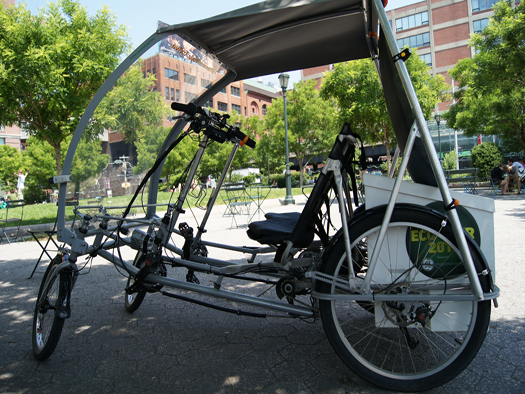 Pictured along side New York City's West Side Highway is the vehicle before the start of the tour. David Fine
SHARE

Just weeks away from the start of the tour, we found ourselves with a working chassis, but without a body-like structure. Assembling and tuning the electric drive system had taken longer than we expected, but now we had to turn our attention to the problem of what this car would even look like.

Originally, I’d envisioned our human-electric hybrid with some sort of egg-like fairing (an aerodynamic shell, placed over the driver), similar to the design of those concept vehicles used to set mileage records. But as we logged test miles, trying out the chassis in the variety of conditions we figured we’d encounter on our trip, we quickly realized that a fully enclosed capsule would be impractical for a number of reasons. First was visibility. A wrap-around fairing, constructed from composite fiberglass or carbon fiber materials, would limit our view to a small canopy bubble. That’s a major problem both for safety reasons–we would be less able to see traffic surrounding us, as well as roadside hazards like broken glass or gravel–and for purely aesthetic reasons. We wanted to be able to see our surroundings! A cross-country trip isn’t a commute, after all.

Next, there was the issue of heat and ventilation. An enclosed cockpit fitted with a bubble canopy would become a giant heat trap during long summer days on the road, with the sun beating down into our rapidly heating bubble. Theoretically we could try some sort of forced air ventilation, but that’d lessen the streamlining benefits of the car’s body.

Weight management was more than just a simple obstacle for us–it was a constant concern. Automotive designers typically think in pounds, but we had to think in ounces, more like builders of ultralight aircraft than automotive designers. While a carbon shell itself might come in at under ten pounds, the mounting hardware and other necessary equipment could easily double that poundage. And even if weight could be kept in reasonable check, any type of ultralight fairing would be as fragile as you’d think a giant glass bubble would be, and difficult to repair while on the open road.

Finally, there was the simple aesthetics of the build. Were this project the brainchild of a group of graduate school engineers, you’d expect a cutting-edge, improbably shaped vehicle that looks more like a prop from a sci-fi movie than a Toyota Carolla. But the message we hoped to send is that conservation can be simple–that with existing technologies, a bit of elbow grease, and some ingenuity, we could build a hybrid vehicle that could drive straight across the country.

Rather than using a futuristic motif, we decided to simplify the exterior, and the more we prototyped and mocked up various ideas, the simpler the end product became. Once we stopped focusing on form and devoted ourselves to function, we realized there were only three primary requirements to address: storage, sun protection and drag reduction. The storage issue was solved by adding a trunk module that placed our batteries and chargers low to the ground, leaving room above for personal items like clothing and camping gear.

Drag reduction might not seem like a significant priority for a vehicle operating at speeds in the 15 to 20 mph range. But when every watt counts, every tiny increase in speed–or reduction in required power–could add several miles to our daily total. Plus, a forward-facing fairing would yield significant benefits when traveling into headwinds, and we’d certainly encounter our share over the course of the 4,200-mile journey.

After testing several profiles at heights from chest to head level, we ultimately settled on a full-width windshield that broke just above our seated eye level. This not only provided a measurable increase in efficiency at a given speed, but also at least some protection from rocks and other debris kicked up by passing cars. For some extra security, we added a roll-bar-like structure to the stern of the vehicle. That gave the our quickly-forming car a higher profile without adding significant weight or drag. The extra height could prove to be a lifesaver–fast-moving drivers might not see such a low-slung, relatively tortoise-like (in speed only!) vehicle, and to add to our visibility, we added a cluster of warning flasher lights on top of that bar.

The simplest and lightest way to add a degree of sun protection turned out to be a soft top which ran from the fairing to roll bar. In the end, the vehicle was not the futuristic design I’d originally envisioned, more reminiscent of an open-wheel roadster with a ragtop. And that’s okay, because a roadster is an great, even classic, vehicle for a road trip on America’s back roads.