A test-tube circuit made of DNA-based logic gates can calculate the square root of numbers up to 15, using DNA... 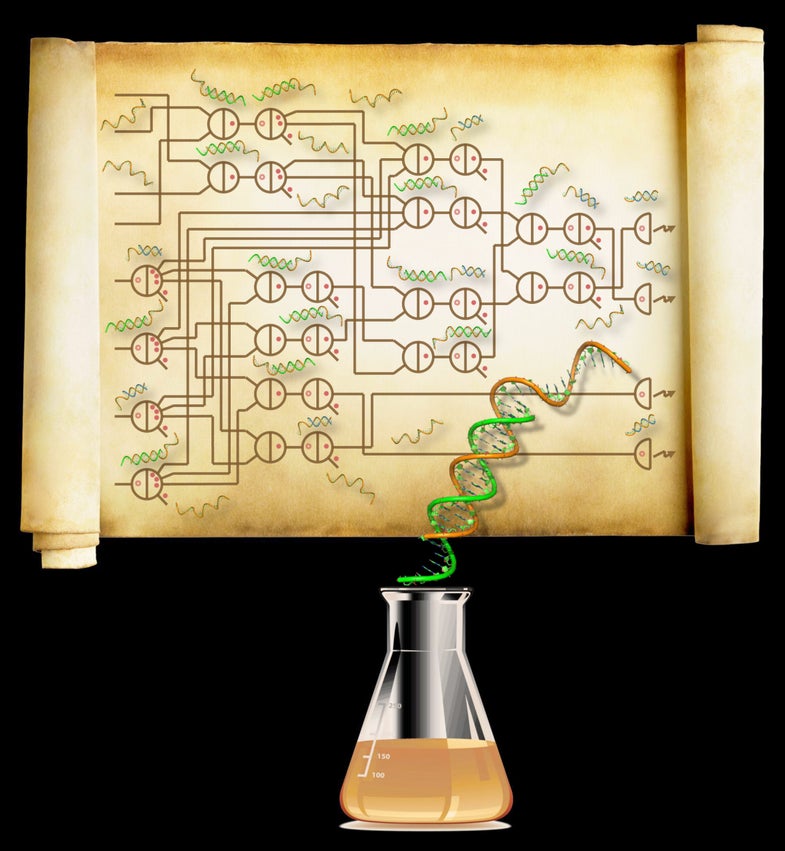 A test-tube circuit made of DNA-based logic gates can calculate the square root of numbers up to 15, using DNA replication and sequence binding to conduct computations. It’s excruciatingly slow — a calculation can take up to 10 hours — so organic laptops are not exactly in our near future. But the real breakthrough is in how this system can enable control of chemical systems.

Researchers at Caltech engineered the most complex biochemical circuit ever created from scratch, according to a new paper published today. The circuit uses DNA instead of electronic transistors to produce the on-off, and-or signals that allow a computer to conduct its calculations.

In a typical computer, transistors let a current of electrons flow in and out. The DNA computer instead uses pieces of short, single-stranded DNA or partially double-stranded DNA placed in a test tube of salt water. The strands stick out like tentacles from the DNA’s double helix, as a news release from Caltech explains. The DNA molecules collide in the water and bind together, producing and releasing offspring molecules. These act as the signals, like electrons in a traditional chip, and they travel among the DNA “gates,” connecting the circuit.

Pairs of gates can create and-or logic based on the output molecules observed, as Ars Technica explains it. (Check out Ars Technica’s post for a more thorough explanation of how this works.)

The researchers, led by postdoctoral researcher Lulu Qian, can encode whatever DNA sequence they want, so they have full control over how the DNA strands interact.

Their largest computer was a 74-molecule, four-bit circuit that could compute the square root of any number up to 15, rounding down the answer to the nearest whole number. To get the answer, the researchers would monitor the concentration of output molecules in the test tube, using fluorescent tagging.

The process takes a long time, but speed is not the point — using this method, scientists could eventually engineer biochemical pathways that are capable of making decisions. This type of control over chemical reactions could be useful for anything from pharmaceuticals to industrial processes. Imagine DNA-based computer chips embedded in your skin, releasing drugs when the time is right, or a DNA computer that can study the concentration of certain molecules in a blood sample and quickly diagnose a disease.

The circuit can be scaled up to larger DNA computers, the researchers say. They can also be customized by adjusting the types of DNA used or reconfiguring the circuit.

“We want to make better and better biochemical circuits that can do more sophisticated tasks, driving molecular devices to act on their environment,” Qian said in a news release. The computer was described in a paper in today’s issue of the journal Science.