Glucose powers the cells in our bodies, and it may soon power the implantable devices we place in there as... 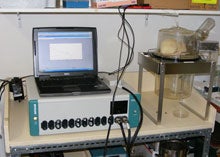 Glucose powers the cells in our bodies, and it may soon power the implantable devices we place in there as well. French researchers have implanted the first functioning glucose biofuel cell in living animals, generating electrical power from the glucose that exists naturally in the body.

The concept of powering medical devices with the body’s own cellular fuel isn’t new, but previous attempts to create a biofuel cell have failed, primarily because the enzymes needed to harvest energy from glucose require more acidic conditions than the body provides. So scientists at Joseph Fourier University in Grenoble decided that if the body wouldn’t accommodate the enzymes, they would create an environment that would.

The team put the enzymes inside graphite discs that provide the proper acidity, then placed those discs in dialysis bags to insulate them from outside conditions. Glucose and oxygen can flow into the device, but the enzymes remain confined, keeping them alive and generating electrical charge.

After surgically implanting devices in two rats, the team was able to achieve a maximum power of 6.5 microwatts, which isn’t so bad considering pacemakers only require 10 microwatts to keep the heart ticking properly. In one rat the power hovered around 2 microwatts for 11 days, while the other rat’s urine showed signs of glucose oxidation for three months.

Of course, a working biofuel cell powering a medical implant would have to last far more than three months and supply a steady flow of much higher power, so for now batteries — and the periodic surgeries that allow them to be swapped — will have to do. But the breakthrough could lead to medical devices that simply run on the body’s own power supply, replacing the need for expensive batteries and frequent incisions. Such a bio-power plant could be used to power everything from insulin pumps and pacemakers to drug delivery mechanisms and permanent biosensors.