The first American to be implanted with a wireless pacemaker is now walking happily around while the device communicates remotely... 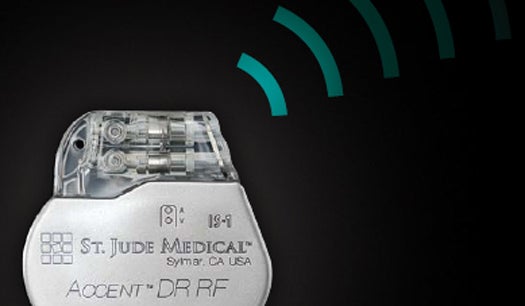 The first American to be implanted with a wireless pacemaker is now walking happily around while the device communicates remotely with her doctor.

Carol Kasyjanski of New York became the first patient to receive the new pacemaker, which was made by St. Jude Medical Inc. and approved by the FDA in July. The device downloads all its information into a remote monitor in Kasyjanski’s home at least once a day and the monitor automatically assesses the performance of both the pacemaker and the patient’s heart. Then it uploads the information to a central server.

If something dangerous is detected during the automated check, the system notifies the doctor immediately. If nothing of note is found, doctors can also browse the larger collection of data uploaded to the server at their leisure. With instant access to information from a pacemaker, doctors can be more involved with their patients status between visits, and can catch dangerous problems from miles away.

Dr. Stephen Greenberg, the recipient’s doctor at St. Francis Hospital in Roslyn, New York, says that in the future, we should see not just Pacemakers, but wireless “disease monitors” of all kinds. Devices could be placed in the body to monitor not just heart rhythm, but also things like high blood pressure and blood glucose, he says.

Perhaps eventually, none of us will have to see the doctor face-to-face at all.