Jazz is not as effective 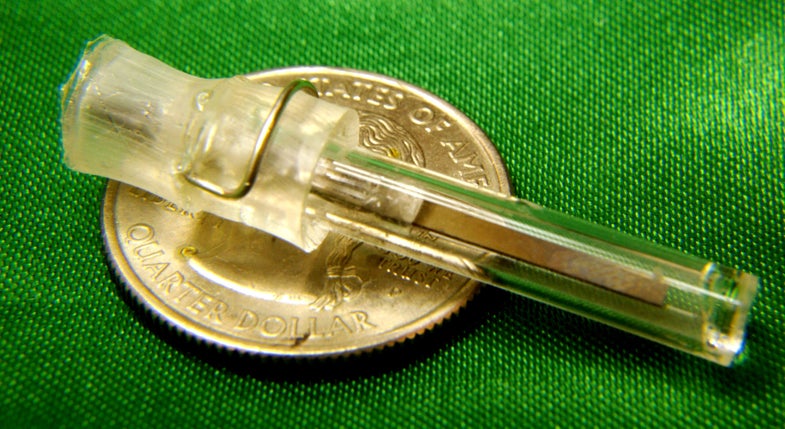 Researchers have created a new type of miniature pressure sensor, shown here, designed to be implanted in the body. Acoustic waves from music or plain tones drive a vibrating device called a cantilever, generating a charge to power the sensor. (Birck Nanotechnology Center, Purdue University).
SHARE

Your favorite hip-hop artist could save a life someday — or at least control a person’s bladder — through the power of heavy bass beats, according to new research. Acoustic waves from rap music shudder through your body with ease, and can readily power a new implantable medical device.

Researchers at Purdue University developed a small pressure sensor that can be implanted to monitor pressure in places like the bladder or a blood vessel damaged by an aneurysm. The problem is providing power to such an implant without a battery, which will drain, or an induction device somewhere on the patient’s body. Purdue biomedical engineering professor Babak Ziaie turned to a cantilever-powered capacitor.

He built a 2-centimeter-long piezoelectric cantilever beam from lead zirconate titanate, or PZT. When the cantilever vibrates, it generates electricity that can be stored in a capacitor embedded in the pressure sensor. Acoustic waves between 200-500 hertz will make it vibrate. One could use a plain tone within that frequency range, but that’s annoying, Ziaie explained in a Purdue news release: “We thought it would be novel and also more aesthetically pleasing to use music.”

Ziaie and fellow researchers placed the device in a water-filled balloon and tested it with rap, blues, jazz and rock music. We do not know which songs they played, sadly. But hip hop worked the best, Ziaie said.

“It contains a lot of low frequency sound, notably the bass,” Ziaie said.

When the frequency falls outside the required range, the cantilever stops vibrating, and the sensor takes a pressure reading and transmits data as radio signals. Ziaie said this type of measurement could be taken for a couple minutes every hour or so to monitor a person’s bladder or blood pressure.

A paper describing the rap sensor is slated to be presented at an IEEE MEMS conference this week in Paris. 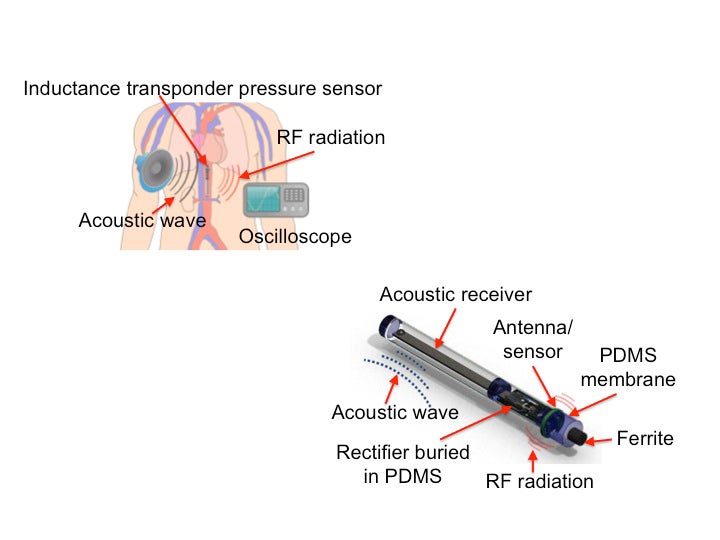 This graphic illustrates the principles behind the operation of a new type of miniature medical sensor powered by acoustic waves.