The new Ground Combat Vehicle weighs twice as much as the tank it's designed to replace, and it's massive enough to survive a roadside bomb. 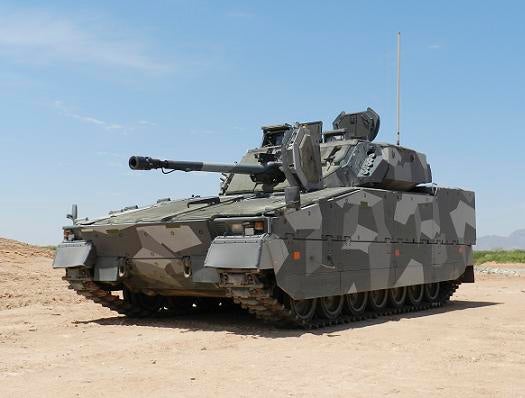 Heavy does not even begin to describe the U.S. Army’s new tank. At 84 tons, the Ground Combat Vehicle prototype weighs more than twice as much as its predecessor, the Bradley Fighting Vehicle. The Bradley is designed to carry a six-man squad (and three-man driving crew) into combat, while the GCV will carry a larger, nine-man squad. Both vehicles will provide covering fire and damage enemy tanks. But the military has built the new GCV to withstand a kind of threat that didn’t exist when the Bradley was deployed in the early 1980s: improvised explosive devices.

Part of logic behind the new tank’s massive size is that soldiers inside a vehicle are more likely to survive an explosion if there’s adequate space for them to wear armor while seated. The extra space also helps distribute pressure from the blast and thus lessens its impact. Another reason the GCV is so huge is that it’s required to carry a larger gun than the Bradley does; the new tank will hold a 30mm cannon, probably the 344-pound Mk44 Bushmaster II. Finally, the GCV’s extra weight means it will need to be manufactured from the start with a more powerful engine. (By contrast, the Bradley got heavier as the Army added armor to it in Iraq, and its original engine wasn’t powerful enough to support the extra weight.)

The Ground Combat Vehicle is pretty much the opposite of the original plan to replace the Bradley. A high-concept proposal called Future Combat Systems aimed to make all U.S. Army vehicles lighter. But during the long ground wars in Iraq and Afghanistan (in which IEDs were the top cause of fatalities), it became clear clear that heavier, not lighter, was the better vehicle design. The U.S. canceled the Future Combat Systems program, and work on the GCV began in 2009. The Pentagon is scheduled to award the first contract to manufacture GCVs in 2019.

An earlier version of this piece misstated the transport capacity of the GCV as a six-man squad, instead of the correct nine-man squad. The 84 ton weight of the GCV only refers to the prototype, and the weight may easily change in the next six years of development.