Can Body Tracking Tech Find The Next Steph Curry? 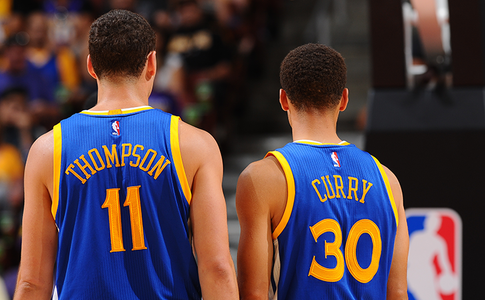 Last year's NBA champions will come to you live, in a Samsung Gear VR near you. Golden State Warriors On Twitter
SHARE

During the annual NBA Draft (which for 2016, concluded last month), teenagers become millionaires. They do this primarily with their bodies, which are measured and tested in the weeks surrounding their selection. But nowadays, the methods for evaluating burgeoning pro-basketball players’ bodies are undergoing seismic shifts.

The changes reflect the more complicated relationship humans have with movement. To wit: recent body-tracking sport technology can’t exactly capture the unique grace that makes LeBron James unfair, but it does move sports a bit closer to science.

In the not so distant future, high school athletes will have data-based portfolios tracking their bodies and performances, rich with metrics no common fan has currently heard of. The proliferation of GPS and other sensor technologies — previously a boutique venture only affordable for pro sports franchises — has begun to infiltrate the amateur level.

While sports science is commonly associated with organizations like the NBA’s Silicon-Valley-friendly Golden State Warriors, college and high school athletics departments are quickly embracing it as well. A high school varisty girls soccer team in Bradley, Illinois, is now using the same devices as Steph Curry and Klay Thompson.

According to Brian Kopp, American CEO of Australian based company Catapult, which produces a chip roughly the size of a flip phone that tucks into a compression shirt and sits between athletes’ shoulder blades, GPS isn’t the defining attribute of their tech. “It’s what we call the inertial sensors on the device, which capture every micro-movement of your body,” says Kopp. “We know when you’re moving left or right, jumping, bending over.”

Kopp says that the college market has been a key driver of Catapult’s growth for the past year and a half. Much of that boom has to do with the fact that, unlike in the pros, the chips can be worn during actual games (due to existing regulations). Catapult used to work with single teams within universities, but they’ve only recently begun to instead strike contracts with entire athletic departments.

The difference between pro, college, and high school usage of the technology can be vast. All of the available data is essentially the same — there are a few variants of the product — but smaller colleges and high schools, with lesser chances of their prospects going pro, are more concerned with injury prevention than maximizing efficiency.

Listen: What Will Basketball Look Like In The Future?

The chips can act to ensure ethical standards, confirming that student athletes aren’t overworked. Only 10 high school programs have taken on Catapult products thus far, but forecasts suggest that number could increase fivefold by the fall.

This would be an obviously statistical windfall for coaches at higher levels — they’ll be able to have more thorough information on any athlete they hope to recruit or ink to a rookie contract. High schoolers just starting to play soccer today will eventually be able to look at two decades worth of data on personal body performance.

It’s inevitable that that body-tracking technology will become a recruiting tool. For now, only a select group of scouts, coaches, and athletes will speak its language, though Kopp says Catapult has outfitted roughly half of Division I’s high-major Power Five schools.

“One of our key metrics is what we call ‘Player Load,’” Kopp explains. “This takes into account all of the activity and movement you’re doing during a session — a practice, a game, a workout. It measures not just the distance you move, but also your short bursts of movement, whether you’re going forward or backwards, whether you’re jumping, and it gives you a score. That Player Load number is very personal, and it becomes a baseline for your performances. You can see whether you’re going 25 percent harder than usual, that sort of thing.”

The chip also measures the number and intensity of accelerations and decelerations — what most sports fans call “explosiveness.” Coupled with the number of jumps and corresponding landings, and a coach and athlete both know how much pressure is being put on the body during exertion. “If you can see from the data, in real time, that someone’s jumping and accelerating 30 percent more than normal, you might sit that person down for injury prevention,” Kopp says.

The chips can also be set to “red flag” any player who’s going beyond critical levels of activity, and show which parts of the body are particularly stressed. As this technology becomes more ubiquitous, the battle to control its proprietary data, particularly in regards to long-term injuries, will open important ethical debates about what sort of disclosure athletes and organizations owe each other.

While they are leading the way in American markets, Catapult is not alone in the athlete-tracking frontier. STAT Sports has a similar chip product called a Viper Pod that includes a 3D gyroscope, while Qualcomm has developed smart leggings that send information to coaches via bluetooth.

All of these technologies promise roughly similar data, with Catapult’s major advantage being their results; in recent years, they’ve collaborated with champions from the NBA, NFL, NCAA, and the Premier League, and their overall client list is a growing behemoth.

While they are leading the way, Catapult is not alone in the athlete-tracking frontier. Devin Johnson, a director of personnel and an assistant to head basketball coach Buzz Williams at Virginia Tech, explains that the ACC team is working with their school to develop an in-house tracking technology. “We like to be the first,” Johnson says. “We like to be the first signing players, and we’re the same with technology. Technology is part of everything we do.”

Though body-tracking is still nascent at the high school level, Johnson says that in scouting prospects they specifically watch high school games and tournaments that use Synergy Sports Technology, a video-based tracking technology that measures players’ tendencies in space.

Data like this helps Williams’ staff make the kind of distinctions usually made more through more abstract and folksy methods. “Is he a play-maker, does he fit in our system, we’re trying to figure those things out,” Johnson says. “We use technology to do that.”

Length, leadership traits, and even smiles will be all mentioned as rationale for selecting various players during the NBA draft. But numbers pulled from a chip sitting between players’ shoulders will be increasingly more important to NBA executives desperate for a system less rhetorical or mystical. And players, empowered and educated by the numbers that prove the worth of their movement, can take a healthier and smarter approach to their practice.

Sports will still be the home of much mythos, silly and unpredictable and full of mysterious aptitudes — but teams at all levels are also inviting in a lot more empirical data from athletes at all levels.