MAXFAS system stabilizes your shooting arm with cables and sensors 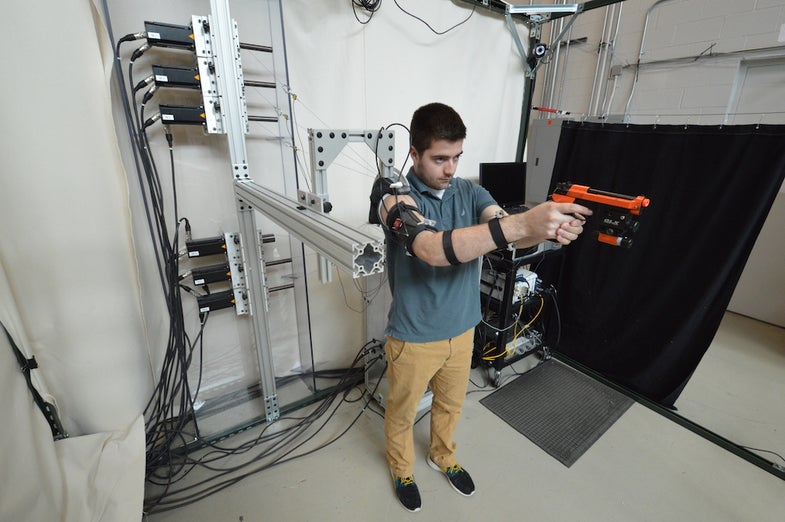 Soldiers of the future may all be crack shots. Not only are bullets getting smarter, but the U.S. Army is developing an exoskeleton that automatically and effortlessly steadies a soldier’s firing arm.

There are of course, low-tech gun rests and other commercial devices for improving aim on the market, but the new Mobile Arm Exoskeleton for Firearm Aim Stabilization (MAXFAS) seeks to bring even more advanced technology to the process, actively sensing and canceling out even slight arm trembling, while also keeping the shooter’s arm free to point at different targets.

“Army soldiers have to be able to hit a target at over 300 yards away,” says Daniel Baechle, a mechanical engineer at the U.S. Army Research Laboratory in Aberdeen, Maryland, and one of MAXFAS’s creators. “That’s more than three football fields put end-to-end. Prior to basic training, many soldiers have never tried to hit a target that far away.”

MAXFAS should help them get up to speed much more quickly. The system relies on a network of cables and sensors to detect movement, then pulls on the shooter’s arm as if he or she were a marionette. 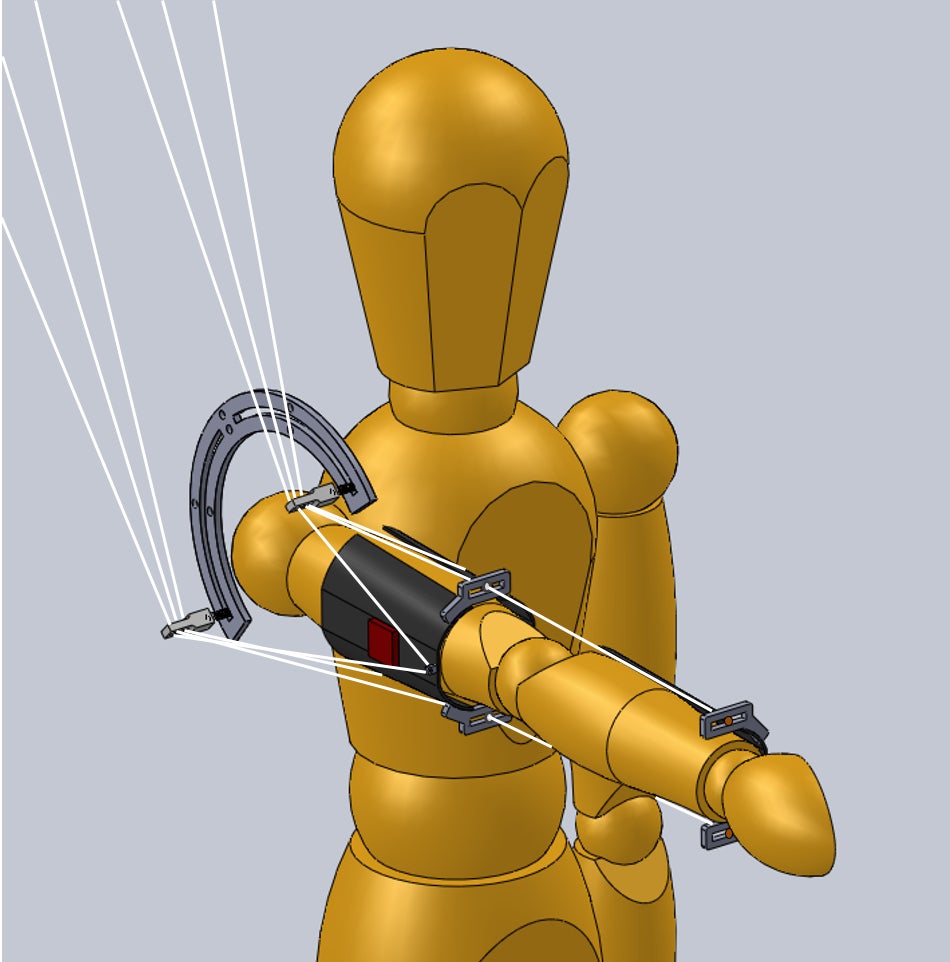 Braces equipped with accelerometers and gyroscopes are attached to the shooter’s forearm and upper arm with velcro straps. These sensors then detect the shooter’s minute arm movements and transfer the data to microchips, where computer algorithms distinguish the shooter’s involuntary tremors from his or her voluntary motions.

Once the electronics establish the frequency at which a shooter’s arm is shaking back and forth, the exoskeleton’s motors use six cables to hold the arm still. MAXFAS is made with carbon fiber composite materials that weigh just 10 ounces.

However, it’s still a stationary prototype whose motors are mounted on a large frame above the shooter. Future versions could incorporate lightweight motors in a backpack to make the exoskeleton mobile, Baechle says.

MAXFAS’s creators were inspired by existing arm-exoskeletons such as CAREX, which is designed to train stroke victims to use their arms again, and WOTAS, which aims to help people living with trembling caused by Parkinson’s disease.

In experiments, 15 volunteers mostly inexperienced at shooting wore MAXFAS and shot Airsoft pistols that were similar in weight to the standard Army issue Beretta M9. The researchers found 14 of the 15 shooters shot better while wearing MAXFAS than before it, with accuracy improving by 27 percent across the group on average.

When these shooters were asked to remove MAXFAS and shoot again five minutes later, the investigators found 12 of them shot better than before they tried on the exoskeleton, with accuracy improving by 15 percent across the group on average. In contrast, shooters who never wore the system saw a decrease in shooting performance over the same amount of shots, likely because their arms were tired.

Though just a small study, the results indicate MAXFAS can help improve shooting accuracy even after it’s worn. And even a slight improvement in accuracy could make a huge difference.

“Using the Army standard M16 rifle, moving the muzzle by just one-sixteenth of an inch will result in the shot being off target by more than 17 inches at 300 yards away,” explains Baechele. “So even small tremors can result in huge aiming errors.”

In the near term, Baechle envisions MAXFAS helping train new soldiers in shooting during basic training.

“The far-future concept I envision is that MAXFAS could become an untethered device, perhaps with motors, power supply, and control computer all in a backpack,” he adds. “MAXFAS could then be worn on the battlefield to improve soldier aim. Alternatively, the tremor-damping algorithms could be incorporated into an existing or future exoskeleton.”

There may also be applications for MAXFAS outside the military. For example, it could help assist hunters, or even be modified to help train skills such as golf swings, tennis swings, or billiards shots, Baechle says.

Baechle detailed his research team’s findings earlier this year at the Data on a Mission conference at Columbia University in New York.