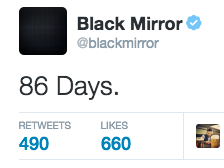 A flurry of details about the third season of Black Mirror have emerged since the show’s Twitter account bluntly posted “86 days.” We knew it was going from British television to Netflix, expanding into a 12-episode season, and coming out a minute after midnight, Pacific time. Now we know that the dozen episodes will be split into two releases: half on October 21, and the other six coming out “some time next year,” according to Vulture.

Black Mirror creator and executive producer Charlie Booker addressed the Television Critics Association yesterday, saying he hoped the series would maintain the “unpleasantness the show seems to have become known for,” adding, “technology is never the villain in this show. It’s always about human failings and human messes, basically, that technology has helped facilitate.”

It’s a shoddy society that blames its consumer electronics.

Executive producer Annabel Jones told the conference that “In our current climate, and with the technological advancement in the last few decades, we’re in a sort of place that feels very new and alien, and we’re evolving as a species, and we don’t quite know how or what the ramifications are yet. So a lot of the stories have that at their heart, a general unease that we haven’t yet explored or come to terms with.”

With more running time to play with, Jones said that the coming season won’t be a total “bleakfest,” with a few episodes taking new thematic turns.

For die hard, “know-nothing” fans that want nothing to do with the show before they can binge watch it, avert your eyes.

Vulture wrote that a “police procedural, a romance, a thriller, a ‘horror romp’, and a military tale” are among coming episodes. It’s not too much of a stretch, though: there were technologically complicated love stories in the season one finale, “The Entire History of You”, followed by the season two premiere, “Be Right Back”, sporting a replicant of a dead lover. The Black Mirror Christmas Special was arguably two sordid romances framed within Jon Hamm playing another family man losing his wife and children. The episode “White Bear” was arguably a horror romp, and the series has been a collection of thrillers. It seems we don’t have to worry much about Black Mirror jumping the shark, thematically, and weaving law enforcement and combat into their dystopian future.

Getting much more specific, Variety reported a list of new episodes with details on their concepts, casts and crews.

The 80’s-centered episode “San Junipero” stars Gugu Mbatha-Raw and Mackenzie Davis. It will be directed by Owen Harris, who previously directed the season two premiere.

“Playtest” features Wyatt Russel and Hannah John-Kamen and is written and directed by Dan Trachtenberg, who made his directorial debut on 10 Cloverfield Lane. According to Variety, it will be video-game themed.

“Nosedive” has been described by Brooker as a “cheerful nightmare,” addressing identity and anxiety in the social-media age. It features Bryce Dallas Howard, Alice Eve, and James Norton. It’s directed by Joe Wright (director of Hanna) and is co-authored by Rashida Jones and Mike Schur (of respective Parks and Recreation and Brooklyn Nine-Nine fame).