Here’s what the U.S. Army’s new gender-neutral fitness test will look like

All soldiers are expected to do the same basic tasks, so they should all have to pass the same test. 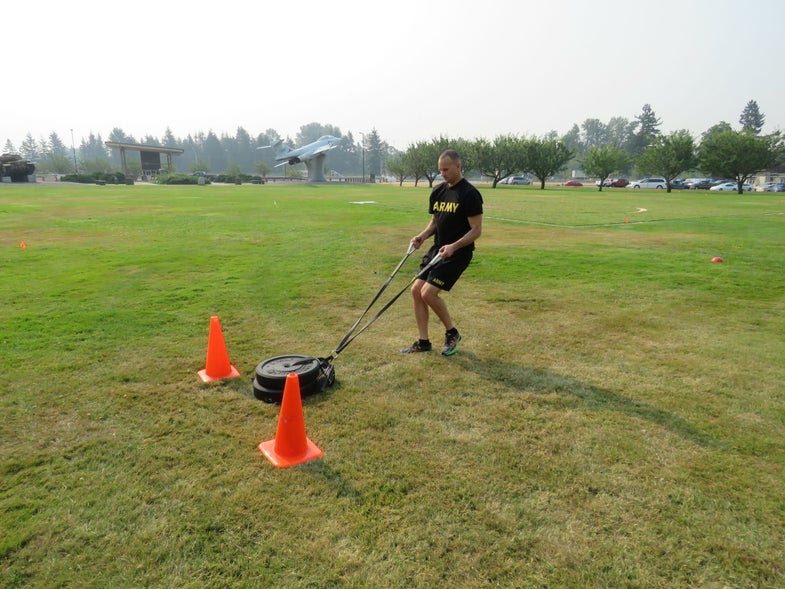 For the past 38 years, the United States Army has tested soldiers on three main physical fitness events: push ups, sit ups, and a two-mile run. You had to get a minimum score of 60 per event to pass (you can fail and stay in the Army, but you have to repeat the test and you can’t fail twice in a row). They’ve revised the precise numbers over the years there’s always been a difference in how much women were expected to do compared to the men.

Take push ups, for example. To score a 60 on the APFT as a 25-year-old woman (the points also vary by age), you have to do 17 push ups. A man of the same age has to do 40. Even a 55-year-old man would have to do three more push ups than that young woman to pass his physical test. The differences stand in the other events as well. Comparing 25-year-olds of different genders, men have to run two miles in about three fewer minutes, though both men and women need to perform 50 sit ups.

But as of October 2018, precisely 38 years to the day that the current APFT went into effect, all soldiers will perform exactly the same test. Why? Because it actually measures a soldier’s capabilities.

“If you ask, ‘why did you change the test now if you’ve had it and it’s been working?’ the answer is ‘because it’s 38 years old,” says Michael McGurk, the director of research and analysis at the U.S. Army Center for Initial Military Training. “In 1980 the knowledge we had about the science of physiology and physical fitness was good, but it was 1980. There’s nothing wrong with the test, but we’ve greatly expanded our knowledge since then.”

In redesigning the test, McGurk and his colleagues wanted to make it more predictive of how well a soldier can perform his or her required duties. They already had a comprehensive list of those, called the Warrior Tasks and Battle Drills, but the APFT was only 40 percent predictive of how well an individual performs those warrior tasks. They wanted to boost that number. So they went back to basics.

A physical fitness test is never going to 100 percent predictive of a person’s abilities. “If I want to measure whether you can dig a foxhole, because I think that’s an important skill, the best way is to take you outside and give you a shovel,” McGurk says. “The next level is I say, okay I’m not going to have you dig, I’m going to put a large pile of sand here and make you move the sand from A to B to replicate digging. It’s not as good a measure, but it’s simpler. And then maybe instead of digging for an hour, I have you do push ups for five minutes.” Neither of those actions exactly replicate digging a foxhole, but at the end you have a simple test that serves as a proxy for something you might need to do in combat.

To figure out which fitness tests would be good proxies, you have to run a lot of drills. Luckily, they’re the Army—they have lots of test subjects who are more than happy to help (or at the very least, are required to participate).

The first step was to design a field test, explains Whitfield East, the lead scientist for the research and analysis team at the U.S. Army Center for Initial Military Training in Fort Eustis, Virginia. That centered around five of the hardest warrior tasks, like evacuating casualties from a vehicle, moving under and around obstacles, and grappling in hand-to-hand combat. If you can do the hardest things, they reasoned, you can certainly do the easier things.

So they made a course and measured the performance of hundreds of soldiers using chips to test their timing and individual graders who watched to make sure everyone met the performance standards. Then they came up with a list of about 23 separate tasks like deadlifts, squats, sled drags, ball throws, and so on that might be able to serve as proxies on the test. They re-tested all of those soldiers to see how well they did on each physical task, then mathematically worked out which tasks had the highest correlation with success on the warrior tasks (that’s called regression analysis).

In the end, they came up with six total events:

“When you look at the three events of the old test, it accounts for 40 percent of the variability of performance on the warrior tasks,” East says. “With the six new events, it accounts for about 80 percent, so we were literally able to double predictiveness.”

And because this new test is much more related to actual combat requirements, it doesn’t matter who’s taking the test—the scoring is all the same. From the beginning, McGurk and East tested a wide variety of soldiers to cover the whole spectrum of the Army population, which meant men and women both old and young in all kinds of jobs.

“It’s a very robust data set,” McGurk says, “But the other thing is that we had a fundamental change in philosophy. The old test was a measurement of how you did versus a theoretical public standard. Your scores were based on thousands of scores that we already had, and it was how well you did against the normal distribution. But with the new test, it’s about measurement against what the Army needs you to do.”

Take the deadlift, for example. East, the lead scientist, explains that they went back to the soldier tasks to work out requirements for exercises like the deadlift. First they’d have a bunch of soldiers deadlift to see how much weight they could pull. “Then we took that same group and had them go to a device where you have to extricate a load out of a hole to simulate extracting a casualty out of a vehicle.” They’d pull a variety of weights to see their capacity, and then based on all those scores East and his team worked out how much the soldiers who could adequately extract an average body were able to deadlift. They’re still finalizing it, but the deadlift requirement is likely to come out at around 160 to 170 pounds. That’s more than enough to account for half of a two person lift, a standard rescue maneuver where two soldiers help an incapacitated colleague out of a dangerous situation.

The “average body,” weighs about 240 pounds as far as the Army is concerned—and that includes a soldier’s equipment. McGurk says that, being the Army and all, they have a ton of information about their population and can therefore calculate that the average soldier weighs 168 pounds. They also know exactly how much the boots, sock, pants, shirt, vest, ammo, body armor, helmet, and other basic outfit requirements for every soldier weigh, so they can add them all together to get the approximately 240 pounds of deadweight that any soldier might be expected to drag to a position of safety.

Of course, there are other considerations. The U.S. Army has to grade a million soldiers on this test all over the world, so it has to be based on exercises that require minimal, sturdy equipment, are easily gradable, have a performance standard, and be done in any climatic condition.

The new test, officially called the Army Combat Readiness Test, will take longer for each soldier to perform—about 50 minutes per person—and require platoons to have some basic equipment, like weighted balls, sleds, weights, and barbells. Those logistical challenges are nothing to sneer at, but the upside is that the ACRT measures physical fitness better. McGurk notes that not everyone will agree on the precise wording of each item, but the list of components that the Army came up with is as follows: muscular strength, muscular endurance, power, speed, agility, cardiovascular endurance, balance, coordination, reaction time, and flexibility. The old test only measured two of those components. The new test gets all 10.

Most importantly, the Army’s fitness standard is no longer measured in terms of how much better you are than someone else. It’s not you versus everyone else. It’s you versus the task. As long as you can do that, you’re physically fit for service.