When Design Is Hostile On Purpose 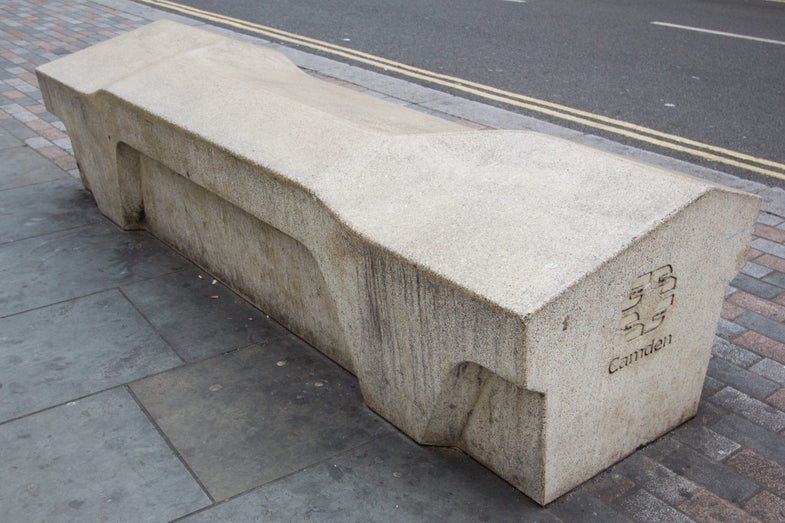 The purpose of design in public spaces is typically to make objects and environments more comfortable, functional, and convenient. But in some cases the exact opposite is true. Design can be intentionally repellent, discouraging certain uses of spaces and things, often by specific, targeted demographics.

Take a public bench: Though its primary purpose is to give people a place to sit, it can also be used for sleeping, skate tricks, or even romantic entanglements. If such uses are deemed inappropriate, unpleasant design elements can be added to deter them. For example, strategically placed arm rests can make sleeping uncomfortable, skating dangerous, and love-making gymnastic, thereby forcing “proper” use of the bench.

This design approach is explored in the book “Unpleasant Design” by Gordan Savičić and Selena Savić. The book was first published in 2013, and an updated E-edition becomes available today. Also known as “hostile architecture,” these designs can be very effective at shaping our behavior.

But as the authors point out, they can also be problematic.

Perhaps the most common use of unpleasant design is to discourage behavior associated with homeless people, such as sitting or lying in public spaces. Some examples are knobs on window sills, spikes on planters, or rails on park benches.

“Public space is the tool, object, and place of negotiation,” Savić told Popular Science. “When it becomes not negotiable, its publicness also becomes questionable.”

She gives the example of a policeman who prohibits people from sleeping on a park bench versus the use of metal arm rests. With the policeman there is the possibility of negotiation, but you won’t get far negotiating with an arm rest.

“This kind of design becomes problematic when humans aren’t aware of it,” Savić says, “Or when it’s done for the pure purpose of profit with little benefit to society in general. It’s especially problematic when it targets certain groups, like young people or the homeless.”

While Savić believes that unpleasant design is often inevitable, even useful in some cases, she thinks the notion that objects can solve problems is flawed. By attacking one problem with unpleasant design, other problems are often created, she says. She gives the example of pigeon spikes, which deter pigeons from landing on eaves and other structures. Though the spikes work well, they tend to concentrate birds in locations without spikes. It doesn’t solve the root of the problem, it just moves it. The same could be said for anti-sleeping spikes, anti-drug use lights, and many other forms of behavior-discouraging design.

The pinnacle of hostile architecture may be the Camden bench, a bizarre concrete object that purports to be for sitting. The bench is designed to repel numerous bad behaviors, including sleeping, skating, vandalism, drug dealing, littering, and theft. Savić is not a fan.

“It deters twenty-two things, and it allows only two,” she says. “It states the expectation that people will be nasty.” She feels that such design is cynical, and “makes an accusation that I don’t think is just.”

But in one respect, Savić appreciates the Camden bench: As such a perfectly hostile object, it has spurred discussion about unpleasant design.

And that’s the idea behind the “Unpleasant Design” book. The authors hope to draw our attention to hostile architecture and give us a language with which to discuss its value and function in public spaces. The book contains essays by numerous authors, interviews, and plenty of photos of examples of unpleasant designs.

Not everyone is taking unpleasant design lying down. Artist Sarah Ross created what she calls “archisuits,” leisure attire designed to allow the wearer to undermine deterrent designs.

And in 2003, French filmmakers Stéphane Argillet and Gilles Paté created “The Fakir’s Rest,” a short film about one man’s quest to misuse every unpleasantly designed, use-deterrent public object he comes across:

Have a look at this gallery of images on unpleasant design from Gordan Savičić and Selena Savić’s collection: