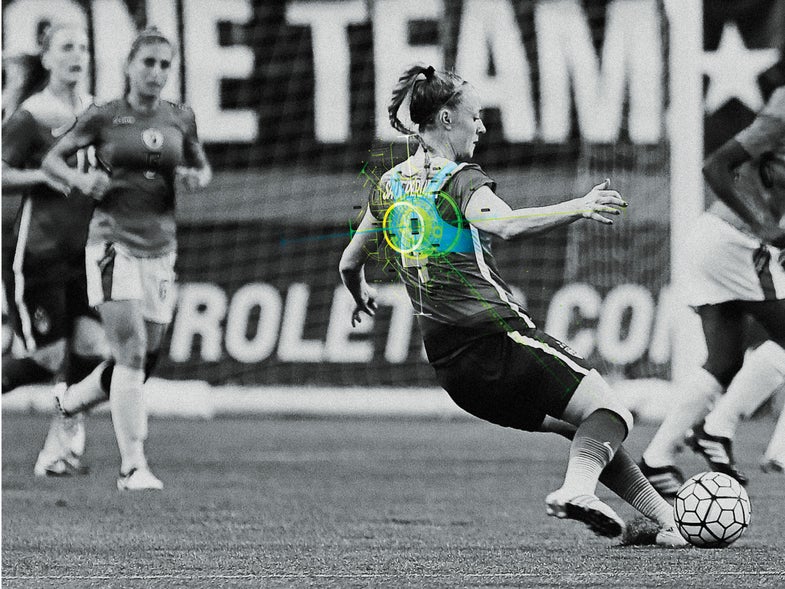 Convincing the U.S. women’s soccer team that it needs an edge in Rio is like telling 1992 Michael Jordan he should practice his jump shot. With three World Cup trophies and four Olympic gold medals to its name, the Women’s National Team is the most dominant in soccer history—male or female. And they’re favored to win again.

This time, however, the team will rely on advanced technology, in the form of GPS tracking devices, to provide a boost. Thanks to the miniaturization and power of sensors, it captures several metrics on every player on the field, down to speed, lateral movements, and impacts. That specificity empowers the team’s trainers to tailor workouts and recovery programs—both of which are crucial to improving performance—to each individual.

“We’ve always developed very talented players,” says center back Becky Sauerbrunn, the team’s defensive anchor. “But at the global level, other teams are catching up. So we’re trying to raise the bar, and that’s where cutting-edge tech comes in.” It’s women’s soccer 2.0.

Developed by athletic sensor company Catapult, the system works similarly to consumer tracking technology. It uses sensors that monitor motion at set intervals. But this system—used by only a handful of elite athletes and various NBA and NFL teams—has way more processing speed, allowing it to measure what was once considered unquantifiable: how hard you hit or get hit, and whether you favor one side of your body over another. “The sampling frequency on the old units was once every second,” says Dawn Scott, the team’s fitness and sports science coach. “In soccer, you could have changed direction three or four times in a second. This thing picks up every single movement and quantifies it.”

The palm-size unit fits into a small pocket sewn into the players’ sports bras, between shoulder blades, where the higher position allows it to pick up a stronger satellite signal. The increased accuracy allows for a detailed record of what each of the 11 players did during practice, or in a game. Now a striker can know how long she was running—and how fast. A defender can find out how many times she was tackled—and how hard she hit the ground.

This is especially useful for players in positions where exertion levels are hard to quantify using a heart rate monitor alone. “As a defender, how much ground I cover isn’t up to me,” says Sauerbrunn. “I’m defending against a forward, so her movement determines my movement.” So she may cover less ground than a striker, and get her heart rate up less often in some games, but she may make or take more tackles, which can wear her down just as much as a sprint. “The GPS can actually measure things like how many times I go for an aerial battle,” she says. All that extra data gives coaches a fuller picture of each player.

It also gives trainers a fuller picture of each player’s game exertion, also known as their “load.” Each player’s load data influences an often-overlooked factor for elite athletes: recovery. By watching each player’s numbers in real time during practices, Scott can monitor load thresholds that, if crossed, will render the player ineffective in upcoming matches. The coach can then tell her to take it easy—or maybe pull her from practice altogether.

“With the Olympics coming up, we have only two days of rest between games,” says Sauerbrunn. “Higher loads mean you’re more at risk for muscle fatigue, which leads to strains and pulls. But you can’t simply compare one player’s load with another’s.”

Eventually the technology may capture ever-finer metrics, like skin temperature and core temperature, lactic-acid levels, and even sleep cycles. “That would be phenomenal,” says Sauerbrunn. “Dawn likes to call it ‘the aggregation of marginal gains’— what can make us that tenth of a percent better? Cutting-edge tech like this is what will continue to keep us a powerhouse program.”